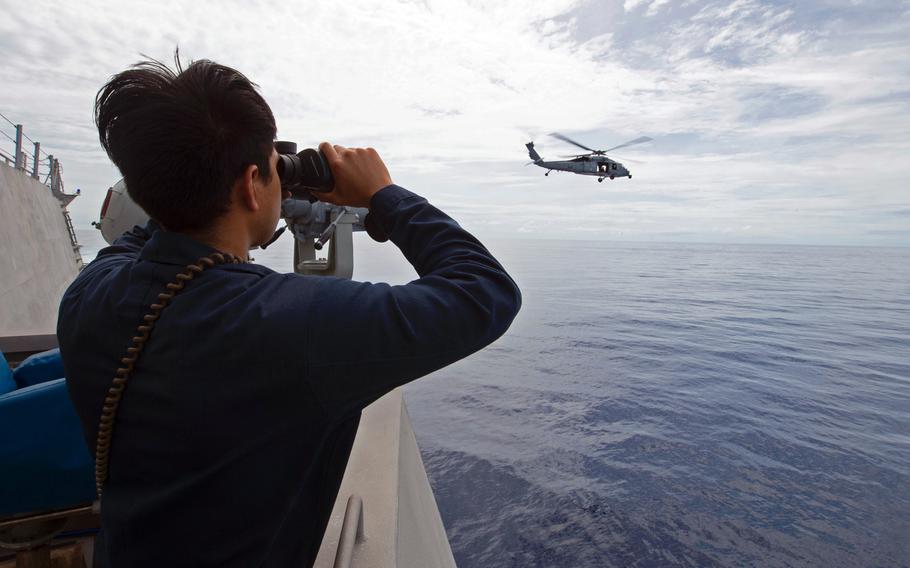 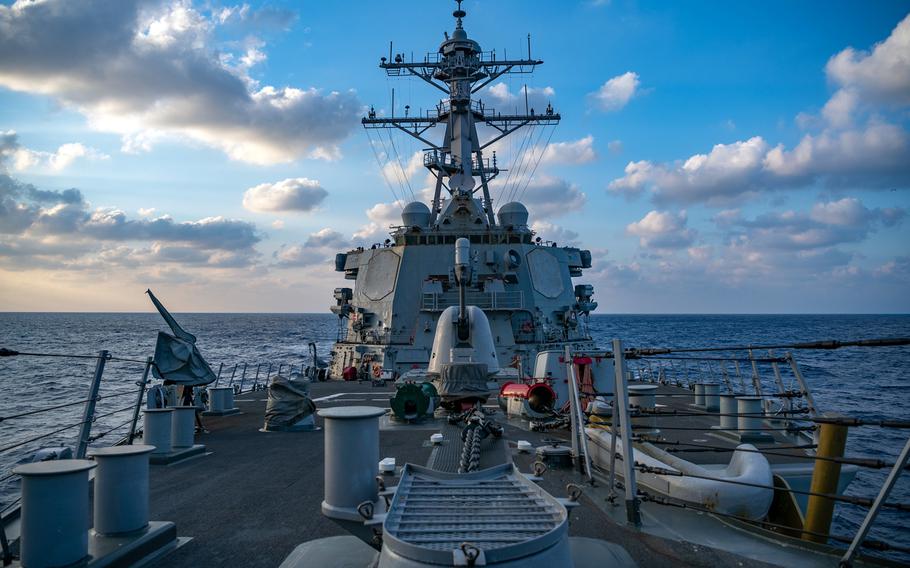 The U.S. military for years stayed largely mum about its missions in the South China Sea, where the Navy and Air Force routinely conduct surveillance and freedom-of-navigation operations with an eye on China’s ambitions there.

But in past weeks, the Defense Department has instead highlighted sea and air operations in the contested sea, which some military experts say is an effort to dispel doubts over the capabilities of the American military as it contends with the coronavirus pandemic.

The U.S. Navy has been particularly hard hit by the virus, with the carrier USS Theodore Roosevelt sidelined in Guam since March 26 as it grapples with the pandemic. More than 1,100 sailors on the ship have tested positive, with one death.

The Roosevelt contagion has left the regional allies and partners speculating about the U.S. military’s readiness to respond to Indo-Pacific flashpoints, said Collin Koh, a naval expert at the Institute of Defense and Strategic Studies at the S. Rajaratnam School of International Studies in Singapore.

“Chinese state media has been adding to this through its own propaganda and possibly disinformation campaign that focuses on arguing that the U.S. military is seriously undermined by the pandemic and therefore not in any position to come to the rescue of Beijing’s rivals in the South China Sea, amongst other flashpoints,” said Koh, one of a number of Asia experts interviewed by Stars and Stripes this week by phone and email. “In short, given the credibility at stake, it’s understandable if the U.S. Navy is seeking to demonstrate its continued primacy in the area.”

During the last week of April, Navy warships operated near the Spratly and Paracel islands, two South China Sea archipelagos that lie at the heart of China’s contested claim of sovereignty over most of the area. Vietnam, the Philippines, Malaysia, Indonesia, Brunei and Taiwan all have overlapping claims with China in the sea.

“It is possible that recent U.S. activity in the South China Sea has been driven by the pandemic, but my guess is that some of this was already planned and that other elements were added after the outbreak on the USS Theodore Roosevelt,” said Zach Cooper, a fellow at the Washington, D.C.,-based think tank American Enterprise Institute and an expert on U.S. defense strategy in Asia.

“I haven’t heard this directly, but my expectation is that the Navy tried to increase their demonstrations of presence to avoid a weakened deterrence posture with the Roosevelt stuck in Guam.”

Retired Navy Cmdr. Bryan McGrath, founder of the Maryland-based naval consultancy FerryBridge Group, said that while he had not perceived a shift in the tempo of Navy operations in the South China Sea over the past year, there nonetheless has been a change.

“It looks to me that the Navy’s efforts to highlight these operations has, in fact, picked up a bit,” he said. “There is little doubt, however, that the pace of U.S. Navy operations in China’s near abroad has picked up in the Trump administration as part of its overall signaling campaign to China.”

Amid criticism that President Donald Trump’s handling of the epidemic has been slow and erratic, the White House and Republican allies have sought to shift blame for the pandemic on China, where the first cases were documented late last year.

Military analysts, however, are generally skeptical that the recent U.S. operations in the South China Sea and the greater willingness to publicize them, are connected to that White House strategy.

“I get the impression the military is driving the [freedom-of-navigation operations] plan with the White House’s approval, rather than the White House directing the approach,” said Bryan Clark, a senior fellow with the Center for Strategic and Budgetary Assessments in Washington, D.C., and a former strategic planner for the Navy.

Koh, from Singapore, said the most recent U.S. operations in the South China Sea “conveniently piggy-back” onto the coronavirus issue.

“In short, the China-U.S. posturing and counter-posturing in the South China Sea reflects the evolving, broader Sino-U.S. geopolitical competition that has worsened, especially since 2017,” Koh said.

Smaller nations in the Indo-Pacific have complained in past years about what they perceive as a lack of U.S. commitment in the region,” said Alex Vuving, a Southeast Asia expert at the Asia-Pacific Center for Strategic Studies in Honolulu.

He speculated that the Pentagon and U.S. Indo-Pacific Command “may be realizing that they have to publicize what they’re doing in order to show the world, particularly the smaller countries, that the U.S. is committed to security in the South China Sea.”

Operations of the kind conducted on the USS America demonstrate U.S. effort to shift the balance of power in the sea away from China, which in recent years has built and militarized artificial islands in the South China Sea as a means of bolstering its claims of sovereignty and armed ability for enforcing those claims, he said.

“Regular shows of force in international waters are a far more effective method of signaling pushback than [freedom-of-navigation operations], and the presence of the USS America Expeditionary Strike Group in the South China Sea recently was exactly this kind of effective message,” McGrath said.