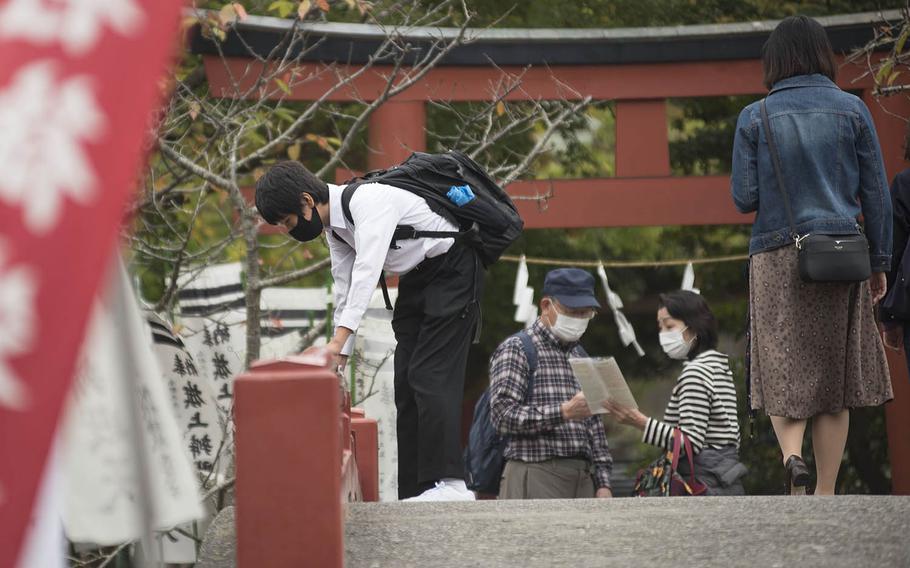 TOKYO — The U.S. Navy in Japan reported two new cases of COVID-19 on Tuesday as the respiratory disease caused by the coronavirus continues to recede within the U.S. military.

Both patients are recent arrivals to Japan who tested positive sometime since Friday while still in isolation, according to a Facebook post by Yokosuka Naval Base. The base has six active cases.

Most new infections among the U.S. military occur within new arrivals to Japan or travelers returning from abroad. The military does not identify new cases in Japan as service members, Defense Department civilian employees, contractors or family members.

All new arrivals and returning travelers are required by U.S. Forces Japan and the Japanese government to isolate themselves for two weeks.

The naval base south of Tokyo, home of the U.S. 7th Fleet, on Friday reported that two individuals, also new arrivals, had tested positive for the virus sometime in the previous week.

Tokyo reported 158 new patients on Tuesday, the highest number of new daily cases since 203 on Saturday, according to public broadcaster NHK and data from the Tokyo Metropolitan Government. The city center is considered a hotspot by U.S. military authorities and is generally off-limits to all U.S. personnel, civilian employees and families.

At Yokota Air Base in western Tokyo, base public health officials conducted a second round of contact tracing Monday at the base high school after someone tested positive there, according to a letter from Principal Marian Leverette to staff, students and family.

The base conducted the second round “out of an abundance of caution,” she wrote. “Please know at this time there are no additional cases of COVID-19 within our school community.”

The school reopened for class on Monday after a thorough cleaning, according to the principal, although the Department of Defense Education Activity declined to say how many close contacts health officials identified and sent to isolation.

Base public affairs officer 1st Lt. Stuart Thrift in an email to Stars and Stripes on Friday wrote that Yokota “will not be releasing the number of individuals on quarantine status.”

On Okinawa, home to the largest concentration of U.S. service members, the prefecture issued a coronavirus warning on Monday evening as the number of new cases there continues to climb.

Okinawans dining out are asked to do so in groups of four or less and keep their time together at two hours or less. Some recent cases have been traced to dining events, according to the prefectural website.

The prefecture on Tuesday reported 23 new cases, a prefectural health official told Stars and Stripes. Some government officials in Japan customarily speak to the media on condition of anonymity.

The prefecture has reported 3,218 cases during the pandemic and 58 deaths.