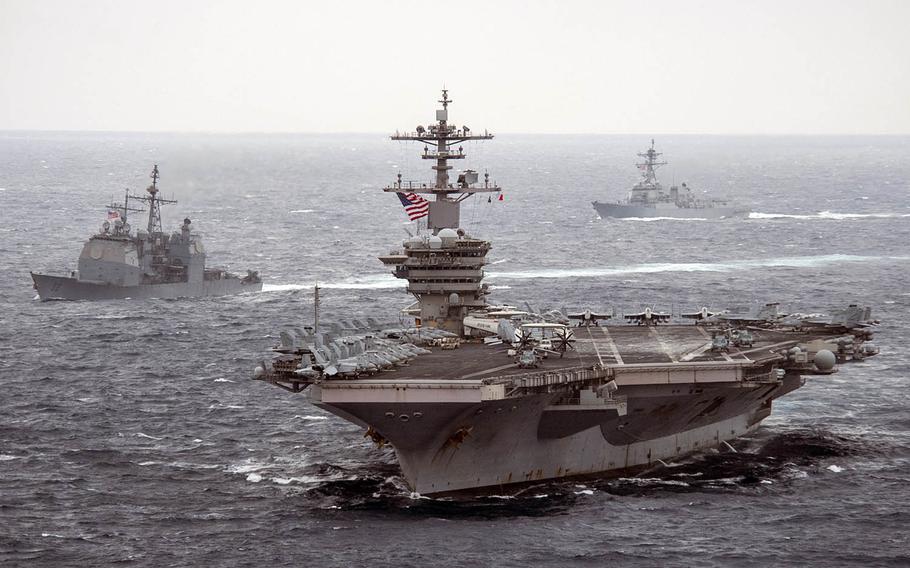 Despite tough talk between the United States and China over, and sometimes in, the South China Sea, their respective navies interact on a “predictable and professional” basis, a Navy official said.

“At the tactical level, I don’t see significant changes from [my] previous two deployments in ‘17 and ’18,” he said, referring to his tour as commander of the carrier USS Carl Vinson.

However, Verissimo noted one change from his previous service in the region: China now has “a larger number of ships.”

Since 2016, China has added 30 vessels to its fleet. These include an aircraft carrier, a nuclear-powered submarine and nine new guided-missile destroyers, according to a December report to Congress on Chinese naval modernization.

Over the past four years, the U.S.-China relationship has frayed, largely over Beijing’s claims to the South China Sea and militarization of islands there. In July, Secretary of State Mike Pompeo declared U.S. opposition to those claims its formal policy, drawing the ire of China, which views the region as its territorial waters.

Still, Verissimo said he had not noticed “a significant difference in how we approach each other, pass each other and communicate with each other.”

The strike group last week took part in an exercise with the Japan Maritime Self-Defense Force practicing “security operations” and “more complex air defense exercises” in the Pacific Ocean, according to a Navy statement on Friday. The service did not specify where in the region the exercise took place.

The Theodore Roosevelt last year deployed to the Western Pacific before diverting to Guam in March to address the most extensive coronavirus outbreak on a Navy ship to date. More than a quarter of the carrier’s crew — 1,271 sailors — ultimately tested positive and one died, according to Navy medical personnel, whose study of the outbreak was published Nov. 11 in the New England Journal of Medicine.

Verissimo said the Navy is considering how to distribute the new coronavirus vaccine to deployed units as many shoreside sailors began receiving their inoculations this month. The Defense Department in December shipped quantities of the Moderna vaccine to bases in Japan and South Korea and in January to Guam, where it is being distributed in phases.

The vaccine’s storage and refrigeration requirements create a unique problem for ships at sea, as the Moderna and Pfizer BioNTech vaccines require sub-zero temperatures for long-term storage.

“We are expecting in the near term, over the next month, to figure out how and when we might be able to receive those vaccines while underway or whether or not it occurs during a port visit or something close to shore,” Verissimo said. “That’s all yet to be determined.”