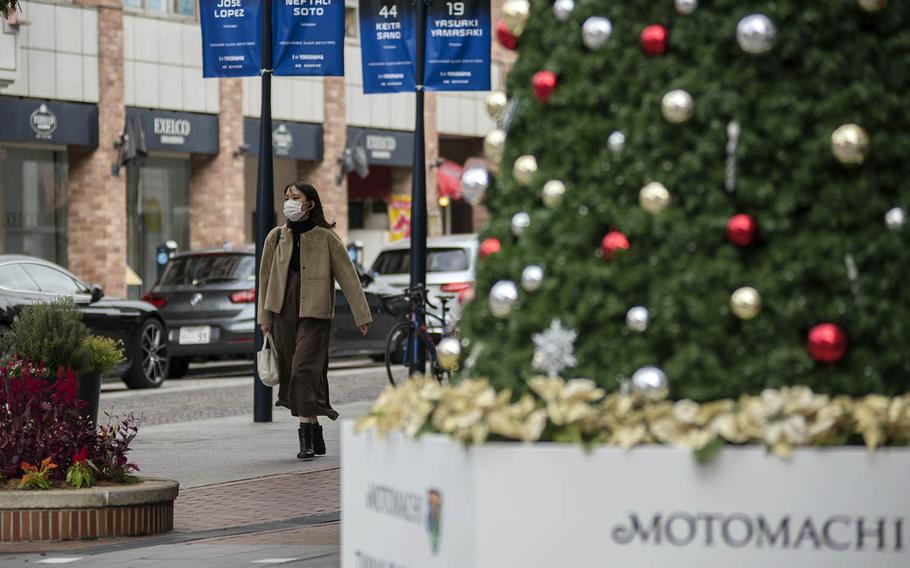 Buy Photo
A woman wears a mask to guard against the coronavirus pandemic near Yamashita pier in Yokohama, Japan, Nov. 9, 2020. (Akifumi Ishikawa/Stars and Stripes)

TOKYO — Nine new coronavirus infections popped up in the U.S. military community across Japan between Friday and Monday as the virus continues a new surge in parts of the country.

At least five of the new U.S. cases are recent arrivals to Japan.

Tokyo, coming off a four-day streak of 300-plus new daily cases, reported 180 new coronavirus patients Monday, according to public broadcaster NHK. The capital city announced 393 new cases on Thursday, according to the Tokyo Metropolitan Government. It reported 255 on Sunday.

Thursday’s was the highest count since the city reported 429 new infections on Aug. 8, according to the metro government. Tokyo is off-limits for anything other than official business to nearly anyone associated with the U.S. military.

Japan on Monday reported 1,694 new cases for a pandemic total of 116,677 and 1,883 deaths, according to the World Health Organization.

Misawa Air Base in northern Japan reported one new case of the virus late Friday. The patient is a woman who arrived in Tokyo with her spouse on a commercial flight; both tested negative upon their arrival, according to a base Facebook post. It did not specify their arrival date.

The two rode a contracted shuttle bus to Misawa, where they quarantined themselves for the mandatory 14-day period. She tested positive on the test required before anyone associated with the U.S. military can exit quarantine, according to the base.

All other passengers on the bus were also quarantined, including the woman’s spouse, according to the base.

Misawa has reported eight coronavirus infections since May. It last reported two cases on Thursday, both new arrivals to Japan.

All new arrivals and travelers with the U.S. military who return to Japan or South Korea must quarantine for a minimum two weeks and be tested at least twice, once upon arrival and again before exiting isolation.

The fourth patient, reported on Saturday, was part of a surge in cases that started with three on Nov. 9 and grew to at least 15 by the weekend.

At the outset, base commander Col. Lance Lewis on Nov. 9 ordered the members of one unit, their families and close contacts locked down in their homes and barracks while the three cases’ contacts were traced. Hundreds of people on the base were also tested, according to a statement Thursday.

The air station is home to the Navy’s Carrier Air Wing 5, the bulk of whose personnel returned over the weekend but whose pilots were back Nov. 6. The wing was at sea with the aircraft carrier USS Ronald Reagan, which returned to Yokosuka Naval Base on Saturday after a five-month patrol.

On Saturday, Lewis updated his command with a message of praise and foreboding posted on Facebook.

“Well, this has certainly been a week for the books,” he wrote. “We’ve learned a lot over this week. Of the utmost importance, we learned our procedures work. Our plan to quickly isolate positive cases to prevent further spread was successful.”

Also, he wrote, the incident proved that COVID-19, the respiratory disease caused by the coronavirus, can spread quickly and that “adhering to the basics” — wearing masks, social distancing and washing hands — can limit its spread.

In southern Japan, Sasebo Naval Base reported Monday on Facebook that two people — one a recent arrival and the other a close contact — tested positive Friday after showing flu-like symptoms while in quarantine. The patients are the only active cases on base.

On Okinawa, the southernmost prefecture in Japan, Kadena Air Base reported Monday that one person tested positive for the coronavirus. The individual self-isolated Friday after experiencing COVID-19 symptoms, according to the base. Six close contacts of that patient are also now in quarantine.

Okinawa prefecture reported 27 new cases Monday and a combined 72 over the weekend, including one new infection at Marine Corps Air Station Futenma, a public health official told Stars and Stripes by phone.

Okinawa has reported 3,768 coronavirus cases and 66 deaths during the pandemic.