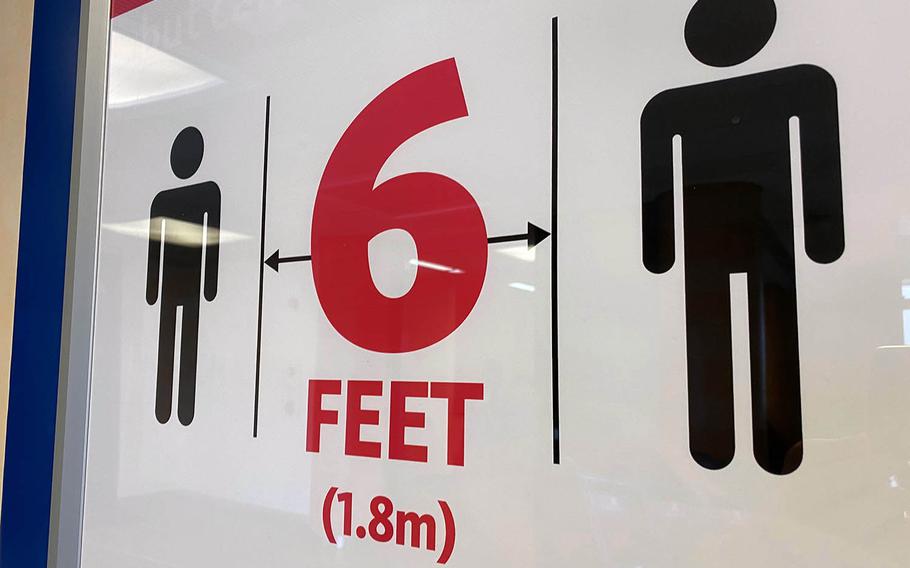 Buy Photo
A sign reminds patrons to practice social distancing inside the exchange at Yokota Air Base in western Tokyo, Monday, Dec. 14, 2020. (Aaron Kidd/Stars and Stripes)

TOKYO – The U.S. military over the weekend and Monday added 16 new coronavirus cases in Japan and 17 in South Korea, where the government is contemplating tougher pandemic measures.

U.S. Forces Korea announced 16 people tested positive going back to Nov. 28, according to a Sunday press release. They are new arrivals to the Korean Peninsula.

The command reported one new case of COVID-19, the coronavirus respiratory disease, on Monday. An individual at Camp Casey, an Army post 40 miles north of Seoul, acquired the case locally, according to a USFK email alert.

South Korea reported a new one-day record, 1,030 newly infected people, on Sunday. Prime Minister Chung Sye-kyun in Seoul on Monday said the government may ask all but essential workers to remain home and some businesses to close.

The government is stockpiling hospital beds to cope with the surge, Chung said.

“However, if the spread of coronavirus … does not stop, our health care system would not be able to cope with the COVID-19 crisis even though we secure sickbeds,” he said.

USFK commander Gen. Robert Abrams, speaking Monday on American Forces Network Radio, said he expected the Moderna version of the coronavirus vaccine, if approved, to arrive for U.S. troops on the peninsula early in the new year.

“What everyone needs to understand is we are not going to get enough vaccine for everybody. It is going to come out in stages. So, the tier one, the top tier, is going to be everybody that works at a hospital, the clinics, our first responders, all those that are on the front lines every day,” Abrams said. “We owe it to them to get them vaccinated.”

USFK has put the largest cities in South Korea, including Seoul and Busan, off-limits to U.S. personnel except for those who live there or have official business.

In Japan, U.S. commands reported 16 people tested positive in the past two weeks.

Two individuals at Misawa Air Base, in northern Japan, developed COVID-19 symptoms while in isolation and tested positive. The two, the only active cases on base, are recent arrivals to Japan, according to a Facebook post Monday by Misawa.

Far to the south, Sasebo Naval Base, on Kyushu island, said two people tested positive for the disease on Friday and Saturday after becoming ill, according to a Monday post on Facebook. The base now has five active cases.

U.S. Army Japan on Monday said a patient tested positive after 11 days in isolation, according to a news release. Someone with the Army being screened for a routine medical procedure at Yokosuka Naval Base on Friday also came up positive, according to a Sunday news release.

Four people have tested positive since Dec. 8 at Yokota Air Base, headquarters in western Tokyo of U.S. Forces Japan, according to a Facebook post Saturday. The base said all four are quarantined but provided no further information. Sixteen active cases are under observation at Yokota, according to the 374th Airlift Wing.

Kadena Air Base, Okinawa, on Sunday said three individuals, including two employees at the base exchange, have tested positive. All three had become ill, two on Dec. 4 and the third on Thursday, according to an 18th Wing Facebook post.

The exchange employees did not work after experiencing coronavirus symptoms, according to the post. “Both work centers where they were assigned have been cleaned/sanitized thoroughly,” the post said.

They are the fifth and sixth base employees to become infected with the coronavirus, according to Kadena. In October, three workers became infected, one at a restaurant inside Rocker Enlisted Club, one at the base Pizza Hut and another at the arts and crafts shop. On Dec. 2, another Pizza Hut employee, a delivery driver, also acquired the virus.