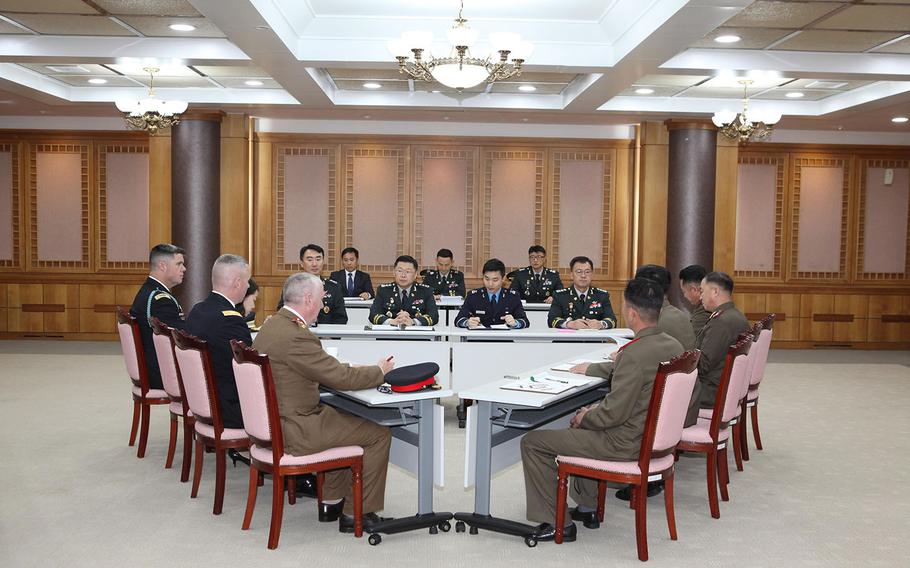 SEOUL, South Korea — The U.S.-led United Nations Command, North and South Korea agreed Monday to remove weapons and guard posts from a jointly patrolled area this week, according to the defense ministry in Seoul.

The decision, made during a second round of trilateral talks in the truce village of Panmunjom, is a major step toward implementing an inter-Korean military pact reached last month.

The ministry also said the Koreas also have finished removing land mines from the area, which is the heart of the heavily fortified border that has divided the peninsula since the 1950-53 Korean War ended in an armistice instead of a peace treaty.

Seoul and Pyongyang have moved forward with initiatives aimed at improving relations despite little progress in diplomatic efforts to rid the North of its nuclear weapons.

The longtime rivals agreed in September to withdraw weapons and guard posts from the Joint Security Area in Panmunjom and replace them with 35 unarmed guards from each side.

That was part of a wide-ranging military agreement aimed at reducing tensions in the border area, including a no-fly zone.

The UNC, which is led by Gen. Vincent Brooks, administers the southern side of the JSA and the rest of the Demilitarized Zone, a 2.5 mile wide, 155-mile long buffer zone.

Monday’s three-hour meeting occurred less than a week after the first trilateral talks.

The three sides “evaluated and confirmed that the destruction of land mines in the JSA has been completed,” the defense ministry said in a statement.

They also agreed to “finish withdrawing firearms and guard posts (from the JSA) by Oct. 25 and to inspect for two days after that,” the defense ministry said.

Panmunjom, the site of the armistice signing, is the only place in the DMZ where North Korean and UN troops face each other. It’s well-known for the blue conference buildings that straddle the border, a popular tourist destination. It has been the site of past violence, including the defection of a North Korean soldier who came under fire from his former comrades as he made a dash to the South last year.

The UNC, which deploys a security battalion in the area, didn’t comment on the most recent meeting.

But Brooks, who also commands U.S. Forces Korea, has signaled support for the inter-Korean military pact.

"UNC will continue to work closely with [South and North Korea] to synchronize implementation efforts on the way ahead,” Brooks said in a statement Friday about the mine-clearance operation.

The trilateral talks were led by military officers from the three sides.

Critics have raised concern that South Korea is moving too fast to embrace the North even as nuclear talks have faltered in the months after an unprecedented U.S.-North Korean summit in Singapore.

President Donald Trump and North Korean leader Kim Jong Un agreed to the “complete denuclearization of the Korean Peninsula” during their first summit on June 12 in Singapore. But the two sides have yet to agree on how to accomplish that.

Trump has said he expects to meet with Kim for a second time after the midterm elections. A senior U.S. administration official told reporters that would likely happen early next year.