US learning to say 'sorry' in Japan after high-profile incidents 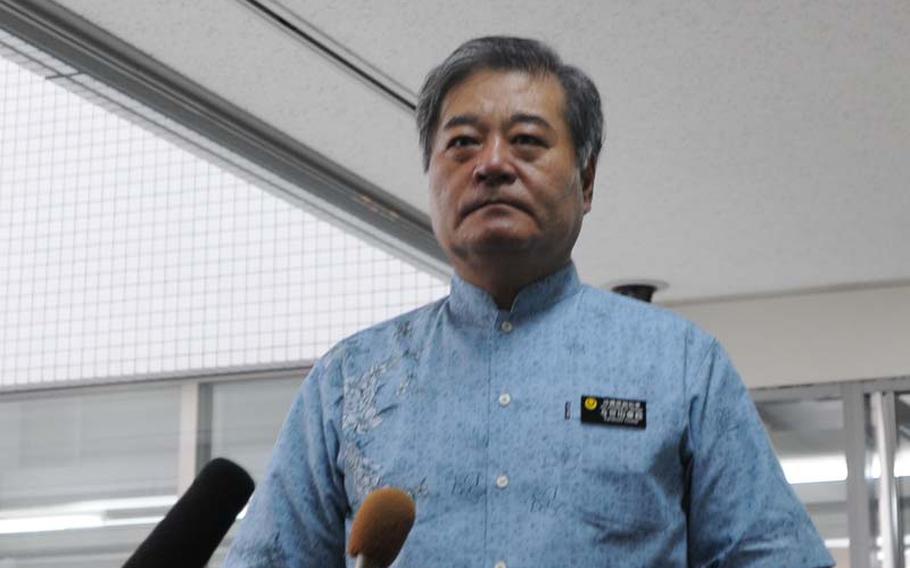 Okinawa Vic. Gov. Kanetoshi Yoseda, who welcomed Rear Adm. Dan Cloyd, Commander Naval Forces Japan, to the island on Oct. 23, 2012, questions effectiveness of ongoing curfew imposed on U.S. servicemembers in Japan after an alleged rape of an Okinawan woman by two U.S. Navy sailors. Citing already in place Liberty Card Program, Yoseda says the most realistic and effective solution is not a curfew but to reduce the number of servicemembers stationed on Okinawa and close Futenma air station as has been agreed upon by two governments 16 years ago. ()

YOKOTA AIR BASE, Japan &mdash; After two sailors were detained recently for the alleged assault and rape of a Japanese woman on Okinawa, official apologies flew.

Lt. Gen. Salvatore Angelella, commander of U.S. Forces Japan, told reporters Oct. 19 that he wanted to &ldquo;personally apologize for the grief and trauma the victim has endured &hellip;&rdquo;

Four days later, Rear Adm. Dan Cloyd, commander of U.S. naval forces in Japan, met with the vice governor of Okinawa and offered &ldquo;heartfelt apologies&rdquo; on behalf of the U.S. Navy and all forces in Japan.

And while John Roos, the U.S. ambassador to Japan, didn&rsquo;t utter the word &ldquo;apology,&rdquo; he did address the incident on three separate occasions, even expressing his own personal anger at what allegedly happened.

The U.S. military hasn&rsquo;t always been so quick to express regret about accusations of serious crimes committed by troops in Japan &ndash; although it seems to be learning it has more to gain from doing so than not.

For example, when four Marines from Iwakuni Marine Corps Station were detained in October 2007 for the alleged rape of a 19-year-old woman, official comments were measured. A USFJ spokeswoman simply confirmed the command was &ldquo;aware of the allegations.&rdquo; Likewise, the U.S. Embassy released a statement acknowledging the incident but refused to comment further.

So when is it appropriate to apologize?

&ldquo;It&rsquo;s not an easy decision to be made,&rdquo; said Maj. Neal Fisher, a spokesman for USFJ. &ldquo;We&rsquo;re always looking out for the health of the alliance. And in this particular case, this was just such a horrendous act that our leadership felt it warranted that.&rdquo;

Fisher said &ldquo;every incident is handled on its own merit,&rdquo; with the outcome based on discussions between the U.S. ambassador and senior military leaders.

&ldquo;I&rsquo;m not at liberty to discuss what they talked about or why they came to the conclusion that they did,&rdquo; he said of the most recent incident.

The U.S. Embassy declined interview requests on the subject.

Not everyone is pleased with America&rsquo;s willingness to apologize for an incident that has not yet been adjudicated.

&ldquo;I am extremely troubled by the fact that our senior leaders are throwing out the constitutional rights of our servicemembers and the fundamental principle that one is innocent until proven guilty in order to appease a foreign nation,&rdquo; Tim Bilecki, a Hawaii-based attorney who routinely defends servicemembers accused of rape, said in an email interview. &ldquo;It appears the military&rsquo;s senior leaders will go to any lengths to win their &lsquo;war on sexual assault.&rsquo; &rdquo;

Indeed, apologizing to foreign countries is considered a sign of weakness by some Americans.

During the final presidential candidates debate, Mitt Romney criticized President Barack Obama for undertaking an &ldquo;apology tour&rdquo; of the Mideast. Regardless of that claim&rsquo;s veracity, Obama knew how some voters regard politicians who say sorry, firing back that the claim was &ldquo;probably the biggest whopper&rdquo; of the campaign.

Apologies, however, carry a somewhat different meaning in Japan.

&ldquo;In terms of the role of an apology, in Japan people apologize much more so,&rdquo; said William B. Cleary, a law professor at Hiroshima Shuda University.

&ldquo;It&rsquo;s a custom and a cultural aspect of Japanese interaction and discourse that apologies are a way to resolve conflicts between people as quickly as possible.&rdquo;

For example, he said, in America if two people have a car accident, an apology by one party would imply fault and might even jeopardize an insurance claim.

&ldquo;Not so here in Japan,&rdquo; Cleary said. &ldquo;The apology is basically to recognize that something has happened that&rsquo;s not right. In the case of the ambassador and the military apologizing, I think they&rsquo;re apologizing for the nuisance that they&rsquo;re causing and trouble they&rsquo;re causing, not only to the victim, but to the Japanese government and the Japanese prosecutors and police for the time they are having to spend on this case, regardless of what the outcome may be.&rdquo;

&ldquo;I accept the apologies as a very appropriate gesture,&rdquo; he said. &ldquo;However, apologies don&rsquo;t fix the problem. That&rsquo;s the nature of a problem like this.&rdquo;

Violent crimes by servicemembers on Okinawa have long been a source of rage for citizens there, particularly since 1995, when a sailor and two Marines kidnapped and raped a 12-year-old girl.

Anti-military feelings were already running high this month with the arrival of the first of 12 Osprey at Air Station Futenma. Some Okinawans regard the hybrid helicopter-plane as a safety threat.

Military officials also are undoubtedly mindful of the fury and protests that erupted in South Korea after an Army armored vehicle hit and killed two teenage girls in June 2002.

Maj. Gen. Russel L. Honor&eacute;, commander of the 2nd Infantry Division, wrote of the bitter lesson he learned about slow apologies as the affair unfolded.

&ldquo;After the accident I did the same dumb thing that many senior leaders do in a crisis situation,&rdquo; he wrote in the book &ldquo;Survival: How a Culture of Preparedness Can Save You and Your Family from Disasters.&rdquo; &ldquo;I put my Public Affairs Officer (PAO) out in front.

&ldquo;He was a good PAO but it was the worst possible move in that culture. It was completely counter the culture of Korea. There, if you or some[one] you are responsible for does something wrong you should profusely apologize. It doesn&rsquo;t matter if you were to blame or not. You should be in the apologizing mode. My young PAO was in the explaining mode.&rdquo;

That&rsquo;s a lesson apparently valued by the current leadership in South Korea. Following the alleged rape of a South Korean teenager by a U.S. soldier last year, the commander of the 2nd Infantry Division issued statements apologizing to the victim of the assault, her family and the Korean people. Maj. Gen. Edward C. Cardon and other U.S. officials who issued apologies before defendant Kevin Lee Flippin went to court were criticized in some quarters for possibly infringing on his right to a fair trial.

A few days after issuing the apology, Cardon stood by his actions.

&ldquo;I have no problem with that,&rdquo; he said. &ldquo;In (South Korean) society, apologizing is important&rdquo; and a way to &ldquo;mitigate some of the blow back we receive.&rdquo;

The Korean approach is supported by a study published last year in the journal &ldquo;International Negotiation,&rdquo; which examined the role apologies play in repairing trust between American and Japanese businesses and consumers.

A survey of people from Japan and America found that &ldquo;compared to Americans, Japanese apologized more often and were more likely to apologize for actions in which they were not involved; on the other hand, Americans were more likely than Japanese to equate apologizing with personal blame.&rdquo;

It also found that &ldquo;apologies for integrity violations led to greater trust repair for Japanese than for Americans.&rdquo;

&ldquo;I don&rsquo;t see the U.S. losing anything because of this action. It could avoid future troubles with this quick move.&rdquo;