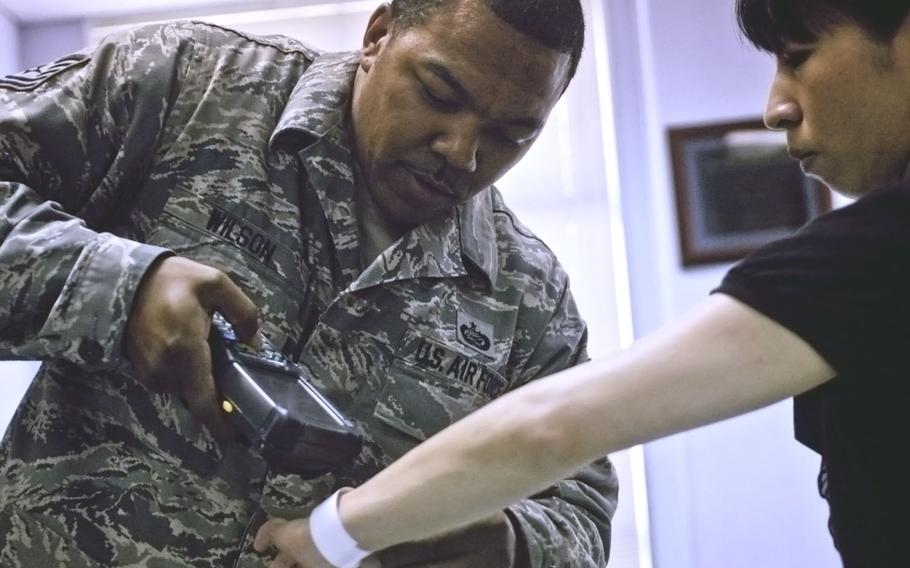 YOKOTA AIR BASE, Japan — The U.S. and Japan have developed separate plans to evacuate thousands of their citizens living on the Korean Peninsula in the event of war.

Now officials from the two nations are trying to learn from each other, with Japanese Self Defense Force personnel taking part in a non-combatant evacuation operation exercise at Yokota Air Base this week.

On Monday, JSDF members — playing the roles of evacuees — were bused to an on-base auditorium where U.S. airmen were waiting to help them, just as they would do in a real-world evacuation.

America has quite a bit of experience in evacuating its citizens from countries in crisis.

In 2006, for example, the U.S. military evacuated 15,000 Americans from Lebanon during a brief war between Hezbollah militants and Israel. In 2011, about 10,000 family members of U.S. personnel in Japan flew back to the U.S. in amid fears about radiation leaking from the tsunami-damaged Fukushima Daiichi Nuclear Power Station.

The U.S. conducts regular drills to prepare for the evacuation of more than 100,000 American civilians from South Korea, where 28,500 U.S. troops stand ready to defend the country against a possible North Korean invasion.

In contrast, Japan has only conducted two real-world NEOs.

In 2003, a small group of Japanese journalists were flown from Baghdad to Kuwait in a Japan Air Self Defense Force C-130 transport at the outbreak of the Iraq War. This past January, Japan flew a group of engineers out of Algeria in a 747 jet after an attack on a gas facility by Islamic radicals that killed dozens of foreigners.

However, officials want to be ready, in case of emergency, to evacuate members of large expatriate communities living in countries such as Indonesia, Thailand and South Korea, where there are about 50,000 Japanese citizens.

Japanese and U.S. officials participating in the Yokota exercise said they hope to learn from each other’s methods.

“This is an opportunity for them to learn from us and for us to learn from them,” said 374th Forward Support Squadron commander Lt. Col. Grant Vineyard, whose airmen were overseeing the exercise.

U.S. evacuees would, ideally, only be in transit at Yokota before boarding flights to stateside safe-haven destinations, he said.

“The goal is for them to only be here for six hours,” he said.

If evacuees needed to stay longer at the base, officials would house them in large indoor facilities such as the fitness center, he said.

In the hours after Japan’s 2011 earthquake, Yokota accommodated passengers from a number of commercial jetliners that were diverted for emergency landings.

The Japanese role-players added a level of complexity to the event that replicated what airmen might find in the real world, he said.

“We don’t always deal with American citizens,” he said. “Other countries will sometimes ask us to evacuate their citizens if we have the capacity.”

One of the Japanese officers participating in the Yokota exercise, Col. Yasuji Kitamura, said he was impressed by the efficiency of the U.S. operation. He proudly displayed one of the bar-coded bracelets that U.S. officials use to keep tabs on evacuees.

Many of the functions carried out by U.S. airmen during the Yokota exercise would be handled by civilian foreign affairs staff during a Japanese operation, Kitamura said.

“The Japanese military participates but it is just to provide transport,” he said.