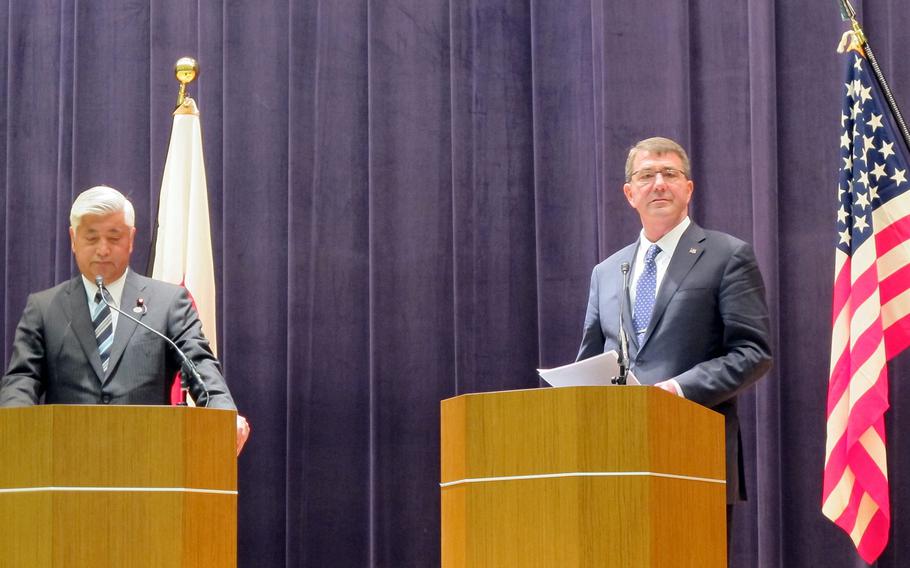 Buy Photo
Japan Defense Minister Gen Nakatani, left, and U.S. Defense Secretary Ash Carter speak with reporters at the Japan Ministry of Defense in Tokyo on April 8, 2015. The nations are working on the final details of the 1st revision to their bilateral national defense guidelines since 1997. (Erik Slavin/Stars and Stripes)

TOKYO — The United States and Japan will expand defense ties over cyberspace and regional security threats as they finalize the first revision of security guidelines between the two allies since 1997, defense chiefs from both nations said Wednesday.

Defense Secretary Ash Carter and Japanese Defense Minister Gen Nakatani also reaffirmed opposition to the use of coercion and force in the East and South China seas, where several nations hold competing claims on island territories.

“It’s one of the kinds of conduct that is contrary to everything our system of alliances stands for,” Carter said.

China maintains an ambiguous claim to about 90 percent of the South China Sea and its many islands and rocks. Although the defense chiefs did not call out China specifically, its forces have had low-level skirmishes with Japan, the Philippines and Vietnam in recent years.

The new guidelines would give the allies more flexibility to address regional threats, such as North Korea’s nuclear weapons and missile programs and tensions over territorial integrity; however, specifics on how the new guidelines will be tactically employed remain unclear.

For example, Japan has no plans to go on joint patrols in the South China Sea, where China is building artificial additions and airfields on the disputed islands it claims.

“In terms of the South China Sea, the Self-Defense Force is not conducting surveillance activity on a persistent basis, and we have no concrete plans for doing so,” Nakatani said.

China also claims the Japan-administered Senkaku Islands in the East China Sea, which the U.S. will defend under its alliance with Japan — a position stated by President Barack Obama last year and reaffirmed by Carter on Wednesday.

The defense officials also confirmed plans between Japan and the Pentagon to set up a new working group concerning space and cyberspace, Nakatani said.

In recent years, the U.S. has developed defense concepts such as Air-Sea Battle, which would begin with an attempt to disrupt an enemy’s satellite communication with its weapons.

The guidelines revision “allows us to open up many new opportunities to strengthen the alliance in areas where that strengthening is needed, because the security situation has changed,” Carter said.

Carter and Nakatani also discussed the ongoing realignment of U.S. forces in Okinawa, where protesters have escalated demonstrations against the move of a U.S. Marine air field from its urban location in Futenma to Henoko, a rural part of the island.

Protesters have called for the airfield to be moved off Okinawa, which houses the majority of U.S. forces in Japan. Military officials have stated that the air field remains critical to quickly transporting Marines to several potential hotspots in the region.

“We reaffirmed that relocation to Camp Schwab is the only solution to avoid the continued use of Futenma air field,” Nakatani said.

Carter and Nakatani spoke for an hour privately before meeting with reporters Wednesday.

Carter’s Japan visit comes ahead of Prime Minister Shinzo Abe’s scheduled eight-day visit to the U.S., beginning April 26. He has been invited to speak before a joint session of Congress.

The Abe government is poised to pass legislation that would allow its Self-Defense Forces to engage in “collective self-defense” for the first time in its post-World War II history. The move would allow Japan to defend its allies, including the United States, if they were attacked.

Japan’s current laws allow it only to defend its own forces and territory. Last year, the Abe cabinet reinterpreted the Japanese constitution to allow for the change, a move criticized by opposition lawmakers.

The U.S.-written 1947 constitution states that “the Japanese people forever renounce war as a sovereign right of the nation and the threat or use of force as means of settling international disputes.”

The government rationale for reinterpretation argued that not supporting a close ally in combat, such as the United States, would jeopardize its national security by endangering the defense alliance.

U.S. officials have been generally supportive of Japan’s push to allow collective self-defense, since it would give its forces more flexibility in working with Japan throughout the Asia-Pacific region.

Besides defense issues, Abe is expected to discuss the Trans-Pacific Partnership, a sweeping 12-country trade agreement supported by Obama and key congressional Republicans. The pact, whose only details are known from leaks of secret negotiations, is opposed by groups with concerns as diverse as Internet privacy, public health and workers’ rights.

On Wednesday, Carter called the TPP “one of the most important parts of America’s rebalance.”