US, Japan agree relocation of Futenma is more than a decade away 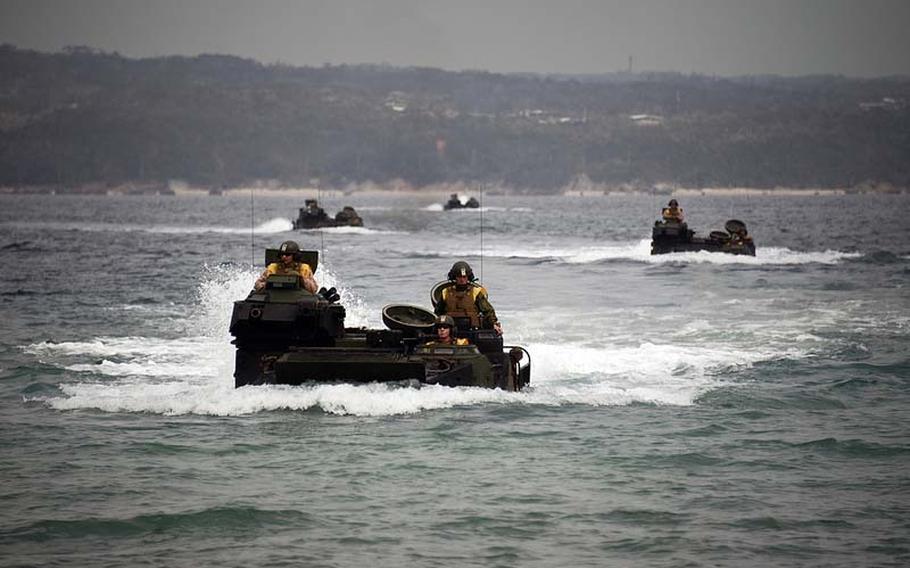 Marines with the III Marine Expeditionary Force maneuver amphibious assault vehicles through the water in formation March 5, 2013, at Camp Schwab on Okinawa, where the Futenma air station is slated to be moved. (Mark W. Stroud/Courtesy U.S. Marine Corps)

Marines with the III Marine Expeditionary Force maneuver amphibious assault vehicles through the water in formation March 5, 2013, at Camp Schwab on Okinawa, where the Futenma air station is slated to be moved. (Mark W. Stroud/Courtesy U.S. Marine Corps) 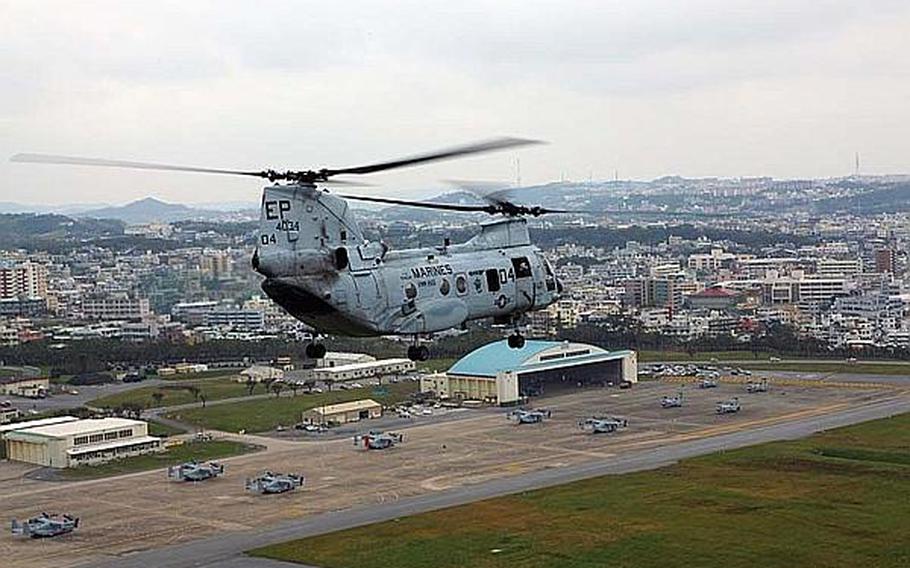 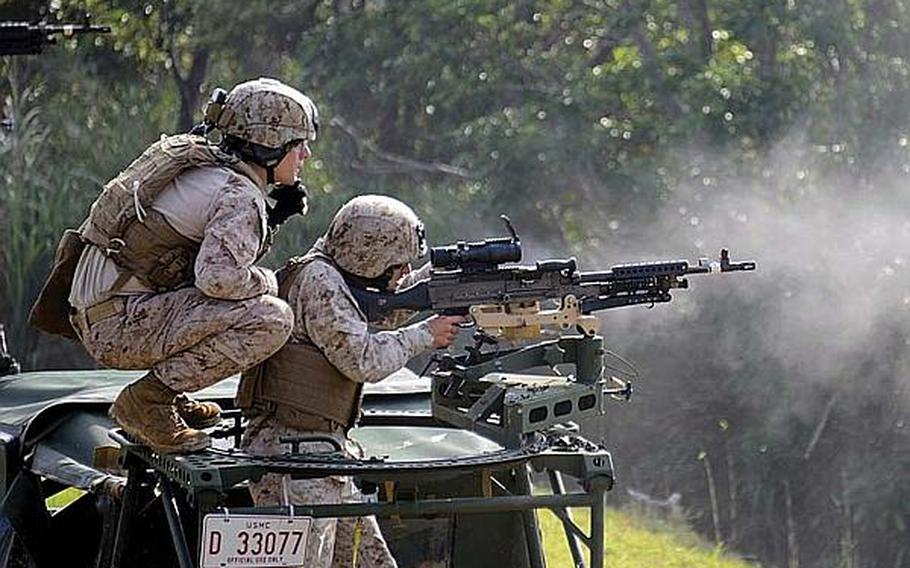 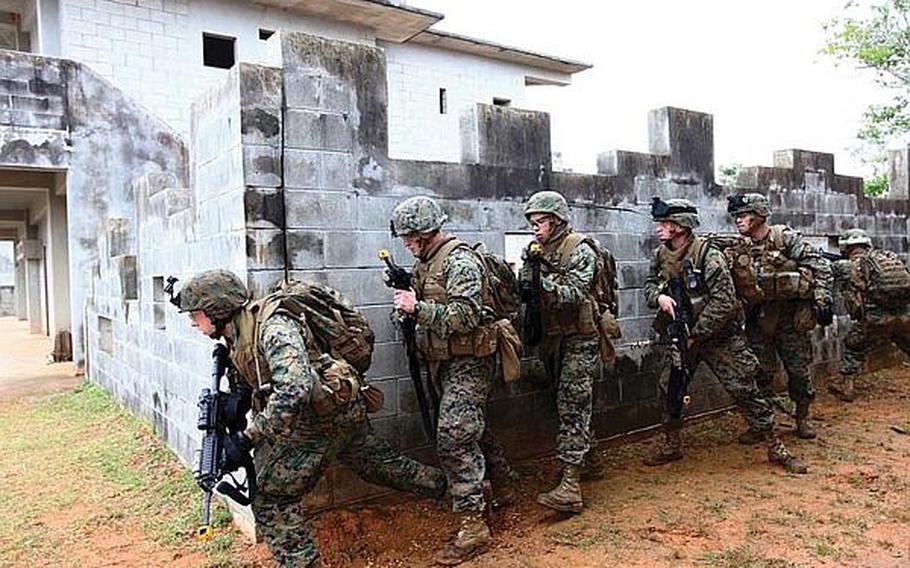 CAMP FOSTER, Okinawa – The United States and Japan agreed Friday that the relocation of the controversial Marine Corps Air Station Futenma and the return of U.S. military land on Okinawa will take at least another 16 years to complete.

The new bilateral accord, published by the Department of Defense, says Futenma will be closed and replaced with offshore runways in a less-developed area of the island by 2023 at the soonest and land that is part of six U.S. military facilities in the south will be fully returned by around 2029.

Prime Minister Shinzo Abe met with President Barack Obama in Washington last month and pressed for the new timeline as his government tries to restart stalled efforts to shift U.S. forces on Okinawa. The agreement sets new deadlines for projects the U.S. and Japan originally slated for completion next year after bending to decades of pressure from Okinawans to draw down the number of Marines and reduce the large military footprint in the remote southern prefecture.

The two allies scrapped a 2014 deadline last year after repeated delays and a lack of progress.

The new pact is also the clearest indication yet that the planned U.S. military pivot toward Asia will continue into the next decade. Adm. Samuel Locklear, commander of U.S. Pacific Command, said last month that another key provision of the realignment, the redeployment 9,000 Okinawa Marines to Guam and Hawaii, will likely also take another 13 years.

“Today, we have reached an agreement with the United States on timing and concrete planning toward the return,” Abe said in a released statement. “This is a fruit of the firm resolve of the U.S. and Japanese governments to put a very high priority on reducing the burden of Okinawa.”

Secretary of Defense Chuck Hagel said the agreement is a “new and important milestone” aimed at reducing forces on Okinawa and will allow the U.S. to create a geographically dispersed force in the region.

The Futenma relocation has bedeviled a succession of Japanese administrations, and its fate remains uncertain even under the new timeline due to Okinawan opposition.

Tokyo has sided with the U.S. and agreed to keep the Marine Corps air operations on Okinawa after the facility is closed by building a new air station farther north along the coast. That decision has long stoked anti-U.S. sentiment on the island and stalled progress.

After years of inaction and political turmoil, the recently elected Abe government made a crucial first step last month by requesting construction permits from the Okinawa prefectural government for the reclamation needed to build an offshore V-shaped replacement runway despite the opposition. The Pentagon called the permit request a “key milestone.”

Now, the Futenma project depends on approval from Okinawa Gov. Hirokazu Nakaima, who said this week it will take eight to 10 months to review the reclamation request and decide whether to issue the permits. The governor has repeatedly called the base relocation “virtually impossible” and asked Tokyo to move Futenma operations out of Okinawa prefecture.

The Abe government has pressed the U.S. to set deadlines to show the prefecture some progress on the return of U.S. military land, which the island hopes can be redeveloped to pump up the isolated, under-performing local economy.

About 2,471 acres of land under U.S. military control since World War II are to be returned to Okinawa. It includes oceanfront property, harbor area and land along main thoroughfares.

According to the pact Friday, some of that land is prepared for return beginning next year, but the vast majority will first require replacement facilities to be built elsewhere and the relocation of Marines off the island.

Sections of Camp Foster, home to III Marine Expeditionary Force headquarters, and all of nearby Camp Lester, which contains a military school and family housing, are slated for return around 2025, the pact says. The Camp Kinser Marine Corps base along the island’s southwestern coast may be returned in 2026. The Naha Port is the last facility slated for return in 2029.

The U.S.-Japan agreement notes that each component, including the Futenma relocation, could take longer than planned, leaving the possibility of further delays. The schedule is to be reviewed every three years by the two countries.

“The timelines and dates shown in this consolidation plan are best-case estimates for when specific facilities and areas can be returned,” the agreement says.

On Friday, Nakaima said he welcomed the new timeline for Futenma and the return of land but would wait to hear from local communities that host the bases before commenting.