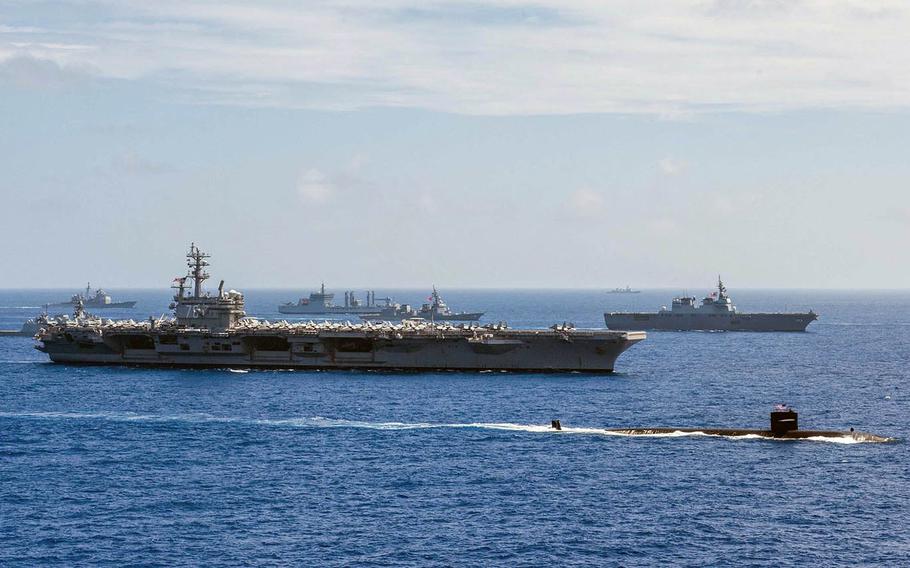 Ships from the U.S. and Indian navies and Japan Maritime Self-Defense Force sail in formation during the annual Malabar exercise in 2018. (Erwin Jacob Miciano/U.S. Navy)

Next month’s Malabar naval drills will include Australian military vessels for the first time in 13 years, India’s Ministry of Defense announced Monday.

The annual exercise comes as India contends with a simmering border dispute with China, and the United States rotates warships through the South China Sea, a sore spot in U.S.-Chinese relations.

The U.S. has made tighter partnerships with regional friends and allies a mainstay of its strategy to offset growing Chinese influence and ambition in the Indo-Pacific region.

Australia last took part in the annual U.S.-India-Japan naval exercise in 2007, according to a statement Monday by the Australian Defense Department.

Malabar, created by India and the U.S. in 1992, added Japan as a permanent partner in 2015. India invited Australia to participate this year “to increase cooperation with other countries in the maritime security domain and in light of increased defense cooperation with Australia,” according to the ministry statement.

The exercise — to be held next month in the Bay of Bengal and the Arabian Sea — comes as tensions rise between China and the four nations regarding Beijing’s claims and militarization of islands and reefs in the South China Sea. The drills’ exact dates have not been announced.

“The participants of Exercise Malabar 2020 are engaging to enhance safety and security in the maritime domain,” the Indian ministry said in its statement. “They collectively support a free, open and inclusive Indo-Pacific and remain committed to a rules-based international order.”

The U.S., India, Japan and Australia make up the Quadrilateral Security Dialogue, which brings together the countries’ defense officials for regular talks, according to the Center for Strategic and International Studies.

The so-called Quad was first created in 2007 but disbanded the following year in response to pressure from China. It resumed in 2017 with a common goal of securing “a free and open Indo-Pacific amid China’s aggressive postures in the region,” The Economic Times reported after a Quad talk in September 2019.

On Monday, three of the allies sent one warship each for a daylong exercise in the South China Sea, according to a Navy statement Tuesday.

The guided-missile destroyer USS John S. McCain, the Australian frigate HMAS Arunta and the Japan Maritime Self-Defense Force destroyer JS Kirisame trained together to hone the allies’ capacity for maritime security and their “readiness to respond to any regional contingency,” according to the Navy.

Thursday, the aircraft carrier USS Ronald Reagan and its strike group made their third appearance in the contentious waters this year and held flight exercises, the Navy said.

China considers the South China Sea within its territorial limits — a claim not recognized by international law — and views the presence of foreign navies there as a provocation.

In June, a clash between Chinese and Indian troops along a disputed section of the Himalayan border left 20 Indian soldiers dead, the worst toll between the two countries since a 1962 war, according to the New York Times on June 16.

Monday, however, in a sign that tensions appeared to have eased, Indian troops who captured an errant Chinese soldier reportedly treated him well. China expected a smooth repatriation, according to the Times.

The upcoming Malabar 2020 exercise “showcases the deep trust between four major Indo-Pacific democracies and their shared will to work together on common security interests,” said Australia’s Minister for Defense Linda Reynolds, according to the Australian statement.

“High-end military exercises like Malabar are key to enhancing Australia’s maritime capabilities, building interoperability with our close partners, and demonstrating our collective resolve to support an open and prosperous Indo-Pacific,” she said.

Malabar will “will bolster the ability of India, Australia, Japan and the United States to work together to uphold peace and stability across our region,” Australia’s Minister for Foreign Affairs Marise Payne said, according to the statement.