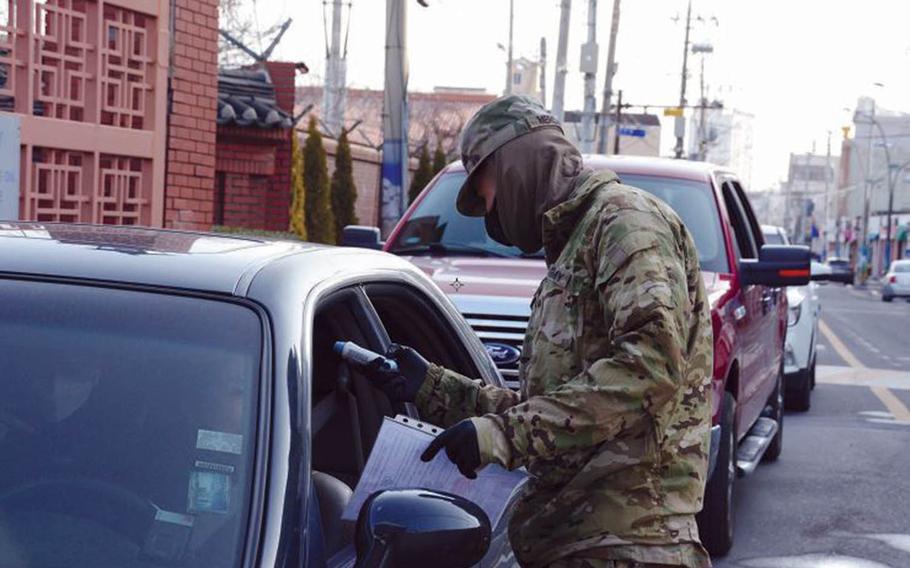 OSAN AIR BASE, South Korea – U.S. Forces Korea will lower its coronavirus risk level in the southern half of the country thanks to low case numbers, including none originating on any U.S. installation there since April, the command announced Wednesday.

Area IV, which includes the installations under Daegu Garrison, will move to Health Protection Condition-Bravo, which signals a moderate risk of the virus spreading, starting 6 a.m. Monday, according to a USFK news release.

The coronavirus, already a presence in South Korea in February 2020, spread rapidly through a church congregation in Daegu and became a full-fledged outbreak. Since then, South Korea has reported nearly 80,000 cases of COVID-19, the coronavirus respiratory disease, and more than 1,400 deaths, according to the World Health Organization.

For all U.S. personnel, including service members, Defense Department civilian employees and their families, the remainder of South Korea remains under Health Protection Condition-Charlie, or a substantial risk of the virus spreading.

Over the past week, South Korea has averaged roughly 400 new coronavirus cases daily, but the outbreak is heavily concentrated farther north in Seoul and in Gyeonggi province, home to Camp Humphreys, the largest U.S. base in the country.

“Area IV’s record of success — including low confirmed cases, zero on-installation positive cases since April 2020, and their reduction of the threat to the community — have contributed to USFK’s decision to adjust its HPCON level to Bravo in Area IV,” USFK commander Gen. Robert Abrams said in the release.

The last USFK case reported in the area involved a service member’s dependent who tested positive on April 25 after returning from a trip to the United States.

Under condition Bravo, U.S. personnel may dine inside restaurants in groups of four or less; travel in the area with overnight hotel stays, including at JeJu Island; shop at indoor malls and take part in outdoor activities.

Adult-only establishments, including bars, nightclubs and karaoke clubs, are still off limits to U.S. military personnel across the country.

Also Thursday, USFK said five people arriving in South Korea tested positive for COVID-19 between Jan. 17 and 31, according to a separate release.

One service member arrived Jan. 20 at Osan Air Base aboard the Patriot Express, a government-chartered air passenger service. Three service members and one retiree arrived at Incheon International Airport aboard commercial flights on Jan. 17, 20 and Sunday.

The U.S. military in South Korea has reported 691 coronavirus cases during the pandemic, of which 500 were service members.