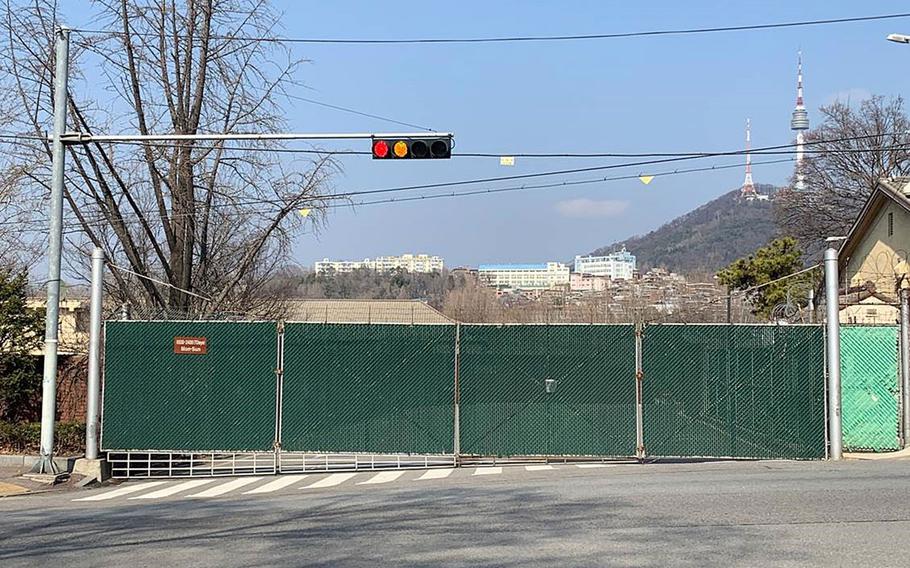 Buy Photo
Yongsan Garrison in Seoul, South Korea, has closed some gates as access has been limited to prevent the spread of coronavirus. (Kim Gamel/Stars and Stripes)

YONGSAN GARRISON, South Korea - The U.S. military said Saturday that it will ease anti-coronavirus restrictions for troops and other personnel on this Army garrison in Seoul, but unauthorized travel to the capital from other bases remains prohibited.

The move, which begins at noon Monday, came more than a month after U.S. Forces Korea lifted restrictions for bases elsewhere in South Korea but maintained them for Yongsan because of continued cluster infections there.

USFK cited “the continued low numbers of confirmed COVID-19 cases within Yongsan district,” for its decision to lower the health alert level from “Charlie” to “Bravo” for the area in central Seoul.

That means personnel may go to restaurants, hair salons, child care facilities, gyms and other off-base establishments in Yongsan for the first time in months, but only if they live in the area.

“Leisure travel to Area II plus remains prohibited for everyone else, while official and necessary duties remain authorized,” USFK spokesman Col. Lee Peters said in a video announcement.

The rest of the city will remain off-limits. The ban on bars and other adults-only establishments also has been extended for USFK personnel nationwide.

Garrison officials said there will be no change to gate closures due to limited access and health check procedures.

People should continue to take precautions, including maintaining a social distance of 6 feet and wearing masks when that’s not possible, USFK said.

South Korea has seen an uptick in coronavirus cases in recent weeks after dropping to single digits, but the numbers have largely hovered at around 50 per day including local and imported infections.