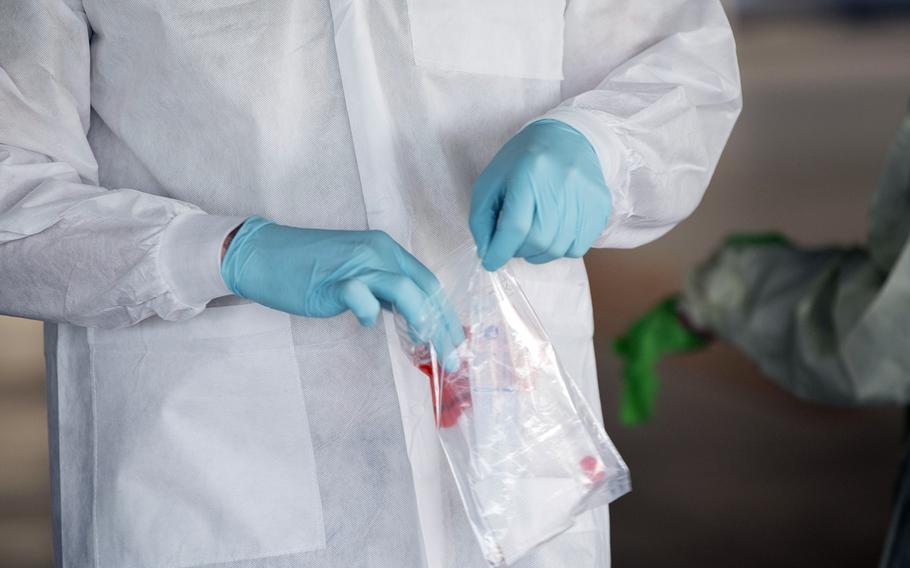 YOKOSUKA NAVAL BASE, Japan — U.S. military personnel newly arrived in Japan must test negative for the coronavirus before they exit a mandated two-week quarantine, according to a new policy announced Friday by U.S. Forces Japan.

Since March, all incoming Defense Department personnel have been required to spend 14 days on restricted movement, which typically means they’re confined to their home or base lodging. This applies to new arrivals as well as travelers returning to Japan.

Under the new policy, people must test negative for the coronavirus before leaving quarantine, even if their 14 days are completed, USFJ spokeswoman Maj. Genieve White told Stars and Stripes on Friday.

Those who test negative before their two weeks have ended will still continue to quarantine until the 14-day requirement is met, according to a USFJ statement issued Friday afternoon.

White said the policy took effect for those beginning quarantine on Friday; however, people already under restriction may be exempt. USFJ notified base commanders of the coming change Thursday, and time is needed to set up processes to comply with it, she said.

“There’s going to be an extra burden on testing capabilities with so many in the queue,” White said. “We’re doing what we can.”

The policy change comes after Japanese Defense Minister Taro Kono on Tuesday told reporters that the United States had arranged to test its personnel before they leave quarantine, according to a translation of a news conference posted to the ministry’s website.

“I understand that they will firmly carry it out as it is extremely important to prevent spread of infectious disease and maintain readiness among the U.S. military,” he said.

At the time of Kono’s statement, the U.S. was not requiring tests for those completing quarantine.

“I think those who are positive but have no symptoms are spreading the infection,” he said. “I think tests are important in that sense, too.”

Kono raised the issue after a military family tested positive after taking a commercial flight from Tokyo to Marine Corps Air Station Iwakuni on July 13. Reports also surfaced in Japanese media of inbound U.S. personnel quarantined in city hotels in Okinawa, a practice the U.S. ended.

The number of people in quarantine each week who are affiliated with the U.S. military in Japan was unavailable Friday. Testing will take place between the 10th and 13th days of quarantine to allow time to process the tests, White said.

Some U.S. personnel are already being tested after the 14-day period, however. On Friday, one person at Yokosuka tested positive after 14 days in quarantine, according to a post on the installation’s Facebook page. The base had nine active coronavirus cases as of Friday.

The 14-day period is based on guidance from the Centers for Disease Control and Prevention. The exact incubation period for the coronavirus is unknown, but patients with similar viruses take between two and 14 days to develop symptoms, according to the CDC.

Scientists believe patients may be contagious for between 10 and 20 days, according to the CDC.

On Tuesday, Kono said Japan and the U.S. had discussed requiring coronavirus tests before travelers left for Japan, but that would have been more complicated “since it would involve a great number of people to do it when leaving the U.S.,” he said.

Japanese officials are testing U.S. military travelers upon their arrival at Japanese airports. Of the nine active cases at Yokosuka, seven were discovered through airport tests.