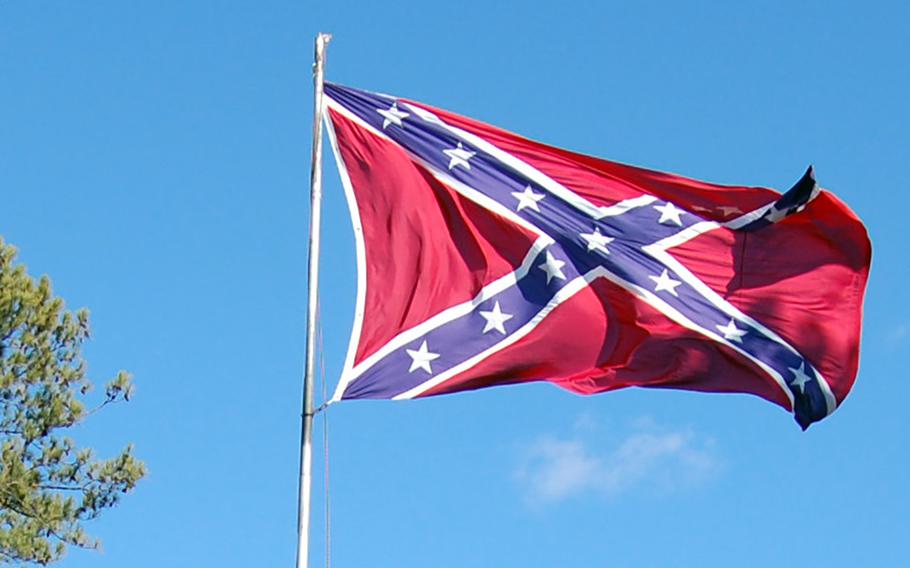 The commander of U.S. Forces Japan has banned the Confederate battle flag on U.S. bases in the country, according to an order signed July 2, 2020. (Wikimedia Commons)

YOKOTA AIR BASE, Japan — The Confederate battle flag is no longer welcome anywhere on U.S. military installations in Japan, according to an order released Monday by the commander of U.S. Forces Japan.

“The Confederate Battle Flag does not represent the values of U.S. Forces assigned to serve in Japan,” says the order signed by Air Force Lt. Gen. Kevin Schneider on July 2. “While I acknowledge some might view it as a symbol of regional pride, many others in our force see it as a painful reminder of the history of hate, bigotry, treason, and devaluation of humanity that it represents.”

The order was posted Monday on the official Yokota Air Base Facebook page. The installation in western Tokyo serves as USFJ’s headquarters. Individual commanders in Japan were given the order prior to it becoming public, said Air Force Chief Master Sgt. Richard Winegardner, the USFJ senior enlisted leader, on Monday.

He said the time was right to lower the Confederate flag in Japan.

“To us, it’s a no-brainer, doing the right thing for all the right reasons,” Winegardner said by phone. He said Schneider issued the order without direction from above.

“We knew it’s going to create some concerns in what is this going to mean, especially when we talk about free speech,” Winegardner said. But USFJ aims to foster inclusiveness, he said; “it’s a small thing we can do to include the entire team, so nobody is left on the side.”

USFJ is the latest command to ban the flag carried by rebel forces from the South during the 1861-65 conflict that ended Black slavery in the United States.

In June, U.S. Forces Korea commander Gen. Robert Abrams banned the flag from U.S. installations in South Korea. The Marine Corps and Navy also recently banned it from all installations, ships and aircraft.

The Army has not banned the flag outright, but base commanders have the power to remove the flags themselves.

Winegardner said he’s unaware of any guidance on the flag question from the Air Force secretary or chief of staff. However, outgoing Chief of Staff Gen. David Goldfein and Chief Master Sergeant of the Air Force Kaleth O. Wright were among the first U.S. military leaders to speak out against racism following the death of a Black man at the hands of Minneapolis police in May.

The Pentagon in early July was working on an overall ban of the Confederate battle flag, PBS NewsHour reported on July 6.

A House committee on July 1 included a measure in the annual defense funding bill that would ban the display of Confederate flags on all Defense Department property. Similar moves are underway in Congress to remove the names of Confederate generals from U.S. military bases.

Schneider’s order directs “all commanders to identify and ensure the removal of” all displays of the flag “or its depiction” at workplaces, common areas and public areas on USFJ installations.

The order makes exceptions, including state flags that incorporate the flag or artistic or educational displays depicting the Civil War or where the flag is “not the main focus of display.”

However, the order covers just about anywhere or anything on a U.S. base in Japan, from office buildings to aircraft hangars, barracks, family quarters, break rooms and individual office cubicles, among others. Vehicles, porches and clothing are included.

Schneider has authority over bases that belong to all service branches and his order covers Yokota, also headquarters of the 5th Air Force and the 374th Airlift Wing; Yokosuka Naval Base, home of the Navy’s 7th Fleet; Camp Zama, headquarters of U.S. Army Japan near metro Tokyo; and bases on Okinawa, including Kadena Air Base and a host of Marine Corps bases and an air field. Marine Corps Air Station Iwakuni, Misawa Air Base, Naval Air Facility Atsugi and Sasebo Naval Base on the main islands of Japan are also included.

The enduring debate over statues of Confederate leaders, military bases named for Confederate leaders and the Confederate battle flag arose again in May after George Floyd, 46, of Minneapolis died under the knee of a police officer, Derek Chauvin, 44, who now faces a second-degree murder charge. For some, the flag symbolizes regional pride or valor in combat; for others it represents institutionalized oppression.

“Regardless of perspective, one thing is clear,” Schneider wrote in his order, “it has the power to inflame feelings of racial division. We cannot and will not tolerate a symbol that incites this sort of division among us.”