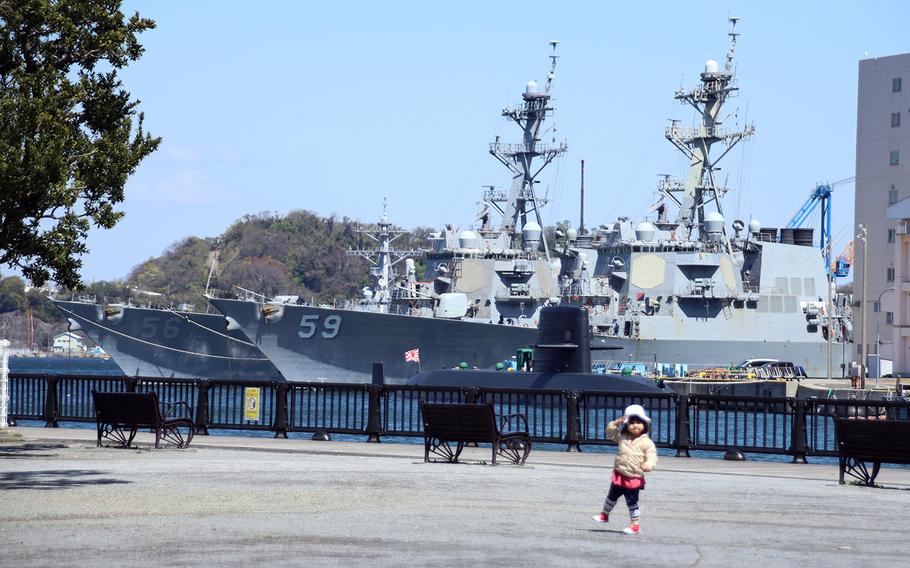 A child plays in a park across from the guided-missile destroyers USS. John S. McCain, left, and USS Russell at Yokosuka Naval Base, Japan, April 14, 2020. (Akifumi Ishikawa/Stars and Strip)

Yokosuka Naval Base, south of Tokyo, on Tuesday announced that seven people at the home of the 7th Fleet are positive for the virus. On Okinawa, the Marine Corps said five new cases there were identified within “the last 24 hours,” according to a Facebook post by Marine Corps Installations Pacific.

USFJ worked with the Japanese government, Indo-Pacific Command and the Pentagon to change its policy and allow installations to report the number of active cases among its personnel and families, according to an email Tuesday from USFJ’s public affairs office.

USFJ lifted the order because “additional transparency at the community level was necessary to accurately depict the scope of the issue, as well as to highlight the effective measures we have in place to limit the spread of the virus,” according to the email.

From now on, USFJ will update its online coronavirus tallies from across Japan each Wednesday and Friday afternoon, the message said. Japanese Defense Minister Taro Kono on Friday questioned the U.S. practice of allowing service members into the country who afterward test positive for the virus. Earlier that week, a U.S. military family broke Japan’s protocol and flew by commercial airliner to Marine Corps Air Station Iwakuni in western Japan. They tested positive after their arrival.

On Okinawa, after the Fourth of July weekend, two clusters of coronavirus cases emerged at Marine Corps bases that, so far, have resulted in 141 positive cases. The five new cases announced there Tuesday are linked to that outbreak, according to the Marines’ Facebook post.

Marine officials on Tuesday said the five new cases were at Marine Corps Air Station Futenma, a site, along with Camp Hansen, of the cluster outbreaks. Two cases at MCAS Futenma were reported Monday by the prefecture.

Last week, Kono and Tamaki called on the U.S. to test its military personnel bound for Japan before they leave the United States. On Tuesday, Kono at a Tokyo press conference reiterated their position that U.S. personnel bound for Okinawa be tested prior to their departure, according to the ministry website.

At Yokosuka, not all of the seven active cases reported Tuesday were recently diagnosed, according to the base announcement.

Most of those cases originated outside Japan, but one asymptomatic base employee recently tested positive during a medical screening before a procedure at Naval Hospital Yokosuka, according to the base statement.

That person’s contacts are being traced to identify others who may have been exposed to the virus, according to the base statement.

The remaining six patients "only displayed minor symptoms" and tested positive at area airports after arriving in Japan from other countries, including the United States, according to the statement and a base Facebook post on Tuesday.

"Fortunately, they were already in restriction-of-movement status when their test results because known," according to the base Facebook post. Before Tuesday, Yokosuka went about two months without a positive coronavirus test that originated locally.

The base did not say how long the cases had been active, but recovery from the coronavirus can take more than six weeks, according to Johns Hopkins Medicine in Baltimore.

However, the city of Yokosuka on Monday learned from the Ministry of Foreign Affairs that someone assigned to the naval base was quarantined at a lodging facility in the city when that person tested positive, an official with the city’s Military Base Division told Stars and Stripes on Tuesday.

The infected person was moved to base lodging, the city official said. But the city was unaware the Japanese government had agreed to allow the Navy to quarantine its personnel at the lodging facility, he said.

“The city urged the Japanese government to follow the rule set for quarantine and to provide information,” he said.

He said more U.S. personnel are expected to arrive in Japan, so the city requested the U.S. military and Japanese government discuss border control measures. All incoming military personnel undergo a 14-day quarantine upon entering the country, according to the statement.Stars and Stripes reporters Aya Ichihashi and Hana Kusumoto contributed to this report.