US forces in vulnerable state in Korea, commander says 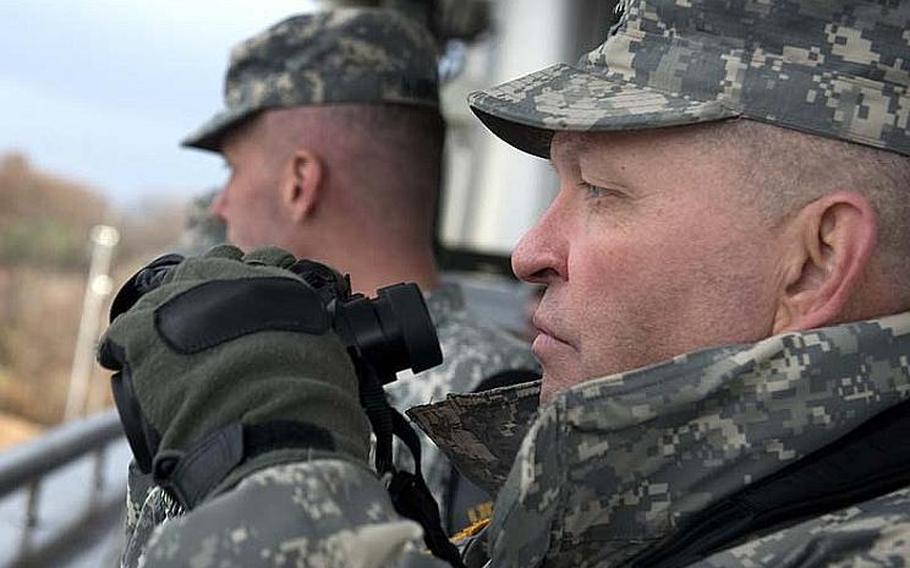 U.S. Army Gen. James Thurman, U.S. Forces Korea commander, looks towards North Korea during a visit to the Demilitarized Zone in South Korea on Nov. 11, 2012. Thurman told a town hall meeting on Jan. 23 that U.S. forces are in a period of "high vulnerability" following Pyongyang's test of a long-range rocket in December. (D. Myles Cullen/U.S. Army)

SEOUL — The top U.S. military commander in South Korea said this week that he worries about another North Korean provocation, and that U.S. forces are in a period of “high vulnerability” following Pyongyang’s test of a long-range rocket last month.

“I’m not trying to frighten anybody, but that’s the deal,” U.S. Forces Korea commander Gen. James Thurman said during a community briefing at U.S. Army Garrison Yongsan. “What happened on the twelfth of December changed some things over here.”

Statements from high-ranking leaders such as Thurman are unusual at community briefings, which typically address upcoming events and issues of interest solely to the local installations.

“We’re doing all the right things across all of our components to make sure that we don’t have any potential security problems,” he told the audience.

“I think we’re in good shape on that, but again, we’ve got a dangerous man north of this DMZ up there, and we’ve got to really pay attention to that,” making reference to the country’s young leader, Kim Jong Un.

Kim assumed power in December 2011 following the death of his father, dictator Kim Jong Il. Analysts have said the missile launch may have been an attempt by the younger Kim to consolidate his authority in case of possible opposition within the country’s opaque political and military structure, or to gain leverage in its relations with other states.

North Korea has claimed that the launch was intended to put a satellite into space for peaceful observation purposes, but the United States and others believe it was a test of technology that could someday enable Pyongyang to strike the continental U.S. with a nuclear device.

This week, the U.N. Security Council passed a measure condemning the Dec. 12 launch as a violation of a ban on ballistic missile activity, and tightened sanctions.

If history is any guide, North Korea also could be planning a nuclear test in the near future. The country followed missile launches in 2006 and 2009 with nuclear tests shortly thereafter.

During a press conference in Seoul on Thursday, former USFK commander B.B. Bell said he expects the North could conduct its third nuclear test within the next three to four months, according to South Korea’s Yonhap News.

“If they are willing under this leader to shoot that intercontinental ballistic missile (ICBM) in clear defiance of the international community, then they have to be willing to conduct a nuclear test,” Bell said.

“It makes no sense to develop ICBM if you are not developing a warhead to put onto it,” Yonhap quoted Bell as saying.

North Korea’s National Defense Commission has made it clear that it views the U.S. as the enemy.

“We do not hide that a variety of satellites and long-range rockets which will be launched by the DPRK (the Democratic People’s Republic of Korea) one after another and a nuclear test of a higher level….will target against the U.S., the sworn enemy of the Korean people,” according to a defense commission statement released Thursday by the Korea Central News Agency.

Also on Thursday, U.S. Secretary of Defense Leon Panetta said that while officials have seen no outward signs that a nuclear test is imminent, “that doesn’t tell you very much.”

“They have the capability, frankly, to conduct these tests in a way that make it very difficult to determine whether or not they are doing it,” he said at a press briefing in Washington.