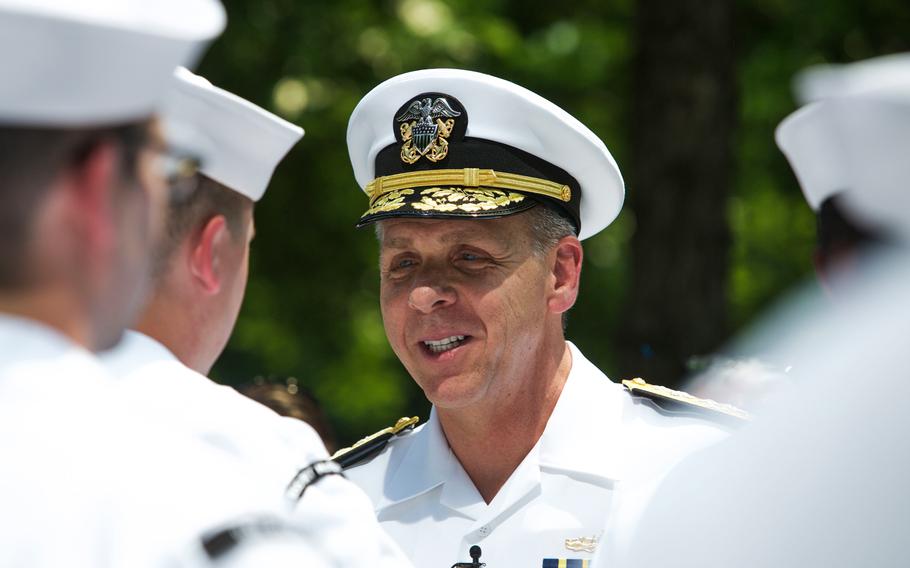 U.S. Navy Adm. Philip S. Davidson addresses U.S. Marines with the 24th Marine Expeditionary Unit and sailors with the USS Bataan during a ceremony at the 9/11 Memorial in New York City May 27, 2016. Davidson has been nominated to head U.S. Pacific Command. (Rebecca Floto/U.S. Marine Corps photo)

U.S. Navy Adm. Philip S. Davidson addresses U.S. Marines with the 24th Marine Expeditionary Unit and sailors with the USS Bataan during a ceremony at the 9/11 Memorial in New York City May 27, 2016. Davidson has been nominated to head U.S. Pacific Command. (Rebecca Floto/U.S. Marine Corps photo) He will replace Adm. Harry Harris, who is expected to retire in May and has been nominated for the ambassadorship to Australia.

Historically, the sitting commander of U.S. Pacific Fleet is tapped to lead PACOM. But Pacific Fleet commander Adm. Scott Swift announced last fall he would be retiring after being told he would not be nominated for the job. He has not yet announced when he will retire.

The reason he was passed over was not made public; however, Swift is in charge of 3rd and 7th Fleets, the latter of which experienced separate high-profile collisions involving the USS Fitzgerald and the USS John S. McCain that killed 17 sailors last year. The incidents brought increased scrutiny upon the Navy, resulting in a wave of punishments that forced a slew of leaders into early retirement and caused several others to be relieved of their duties.

In the wake of the collisions, Davidson, a seasoned surface warfare officer, was tasked with completing a comprehensive review of surface fleet operations and incidents at sea over the past decade, with special attention to the 7th Fleet.

A graduate of the U.S. Naval War College, Davidson’s decorations include the Distinguished Service Medal and the Navy and Marine Corps Commendation Medal with Combat “V.”

“He served earlier in his career in policy, strategy and operations billets on multiple tours with the U.S. Pacific Fleet staff, the Navy staff and the Joint Staff, and as the Navy’s military aide to the vice president of the United States,” his Navy biography states.

Air Force Gen. Terrence O’Shaughnessy, commander of Pacific Air Forces, had been under consideration to head PACOM, according to recent news reports. He will instead take over U.S. Northern Command, as well as command of North American Aerospace Defense Command at Peterson Air Force Base, Colo., the Pentagon said.

A 1986 graduate of the U.S. Air Force Academy, O'Shaughnessy has commanded at the squadron, group and wing levels, including the 35th Fighter Wing as Misawa Air Base, Japan, and the 613th Air and Space Operations Center at Hickam Air Force Base, Hawaii.