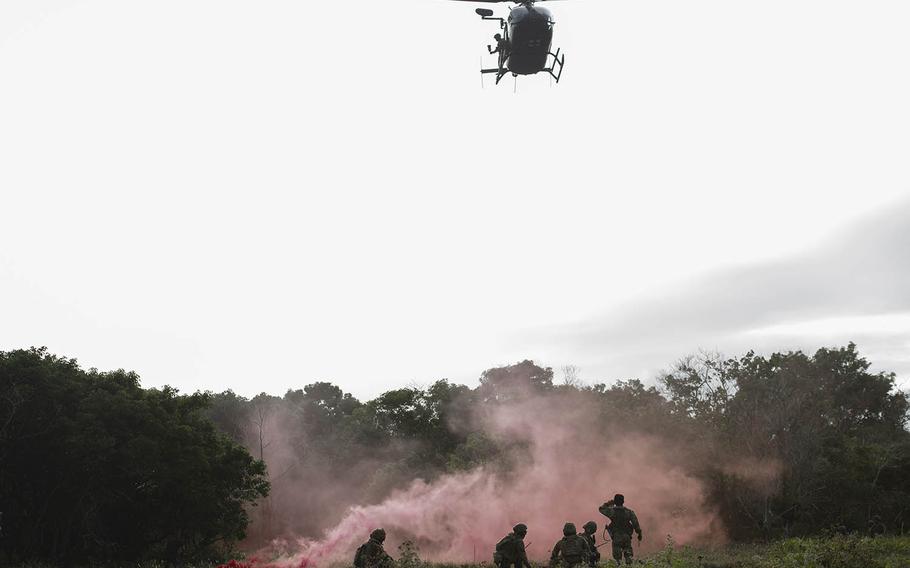 F-35 and F-16 fighters will fly from an austere airfield “carved out of the jungle” in Guam during the Cope North exercise next month as part of the Air Force’s goal of deploying aircraft and airmen more broadly in the region.

The demonstration is part of ongoing efforts to integrate the Air Force’s agile combat employment concept, or ACE, into its combat operations, said Brig. Gen. Jeremy Sloane, commander of the 36th Wing at Guam’s Andersen Air Force Base, during an Air Force Association webinar Tuesday.

The strategy complements the Pentagon’s shift in emphasis toward great power competition with China and Russia.

The hub-and-spoke model “complicates the enemy’s targeting problem,” Sloane said, referring at one point to a propaganda video released by China in September in which its nuclear-capable bombers attack a seaside air base.

“You look at the target that was presented during that video — it’s Andersen Air Force Base,” he said. “We look at ourselves sitting out here providing potentially an immense opportunity for U.S. and partner operations, but we’re also sitting out here as a tremendous target.”

During the annual trilateral Cope North exercise slated for next month, F-35s and F-16s from Misawa Air Base in Japan and Eielson Air Force Base in Alaska will land, refuel, plan and launch out of Andersen Air Force Base’s Northwest Field, Sloane said.

“For those of you who haven’t been here, Northwest Field is a truly austere airfield carved out of the jungle on the northwest side of our base,” he said.

“Just under 8,000 feet with some ramp space, taxiways and some hangar capacity, Northwest Field is surrounded by harsh jungle. It has minimal markings, minimal lighting and no permanent aircraft or airfield control.”

Up to now, only C-130 cargo planes and helicopters have used the airfield, he said.

During Cope North, the airfield will serve as the “spoke” in what Sloane described as “one of the most challenging ACE operations” to take place thus far.

“My hat’s really off to the [operations groups] from Misawa and Eielson who are buying a lot of risk testing out this concept in a no-kidding remote environment,” he said.

The 36th Wing also makes use of airfield spokes in Tinian, Saipan and Palau, Sloane said.

Last year, the U.S. renovated an airfield on the island of Angaur in Palau, giving the tiny nation a secondary airstrip and American armed forces another option in the Pacific.

During Cope North, eight Air Force engineers will deploy to Angaur to repair a huge crater on the airfield, while other airmen will go to Palau International Airport to “enable agile hub-and-spoke operations for F-35s,” Sloane said.