US destroyer joins Australian frigate for training in Philippine Sea 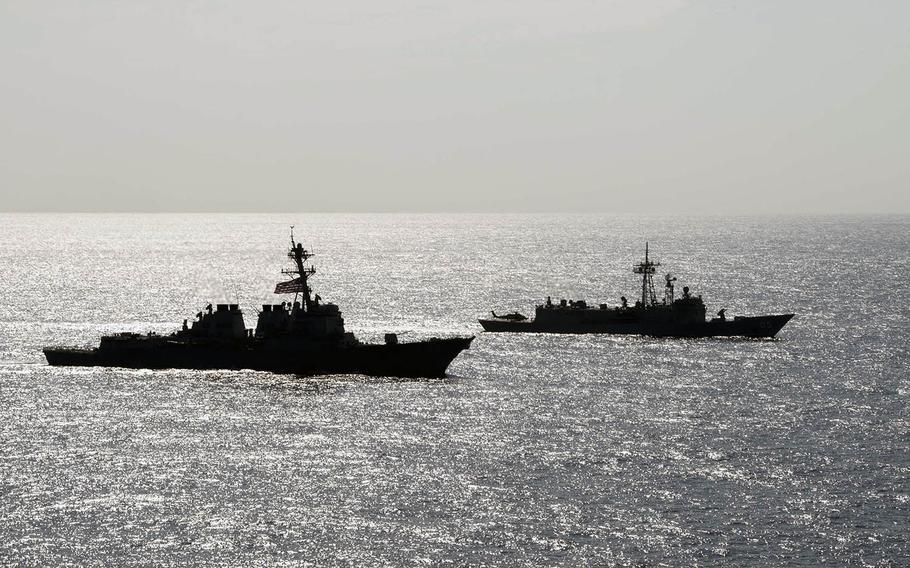 The USS Preble and the Australian frigate HMAS Melbourne move in formation on the Philippine Sea on Thursday, April 18, 2019. (Bryan Niegel/U.S. Navy)

The USS Preble and the Australian frigate HMAS Melbourne move in formation on the Philippine Sea on Thursday, April 18, 2019. (Bryan Niegel/U.S. Navy) 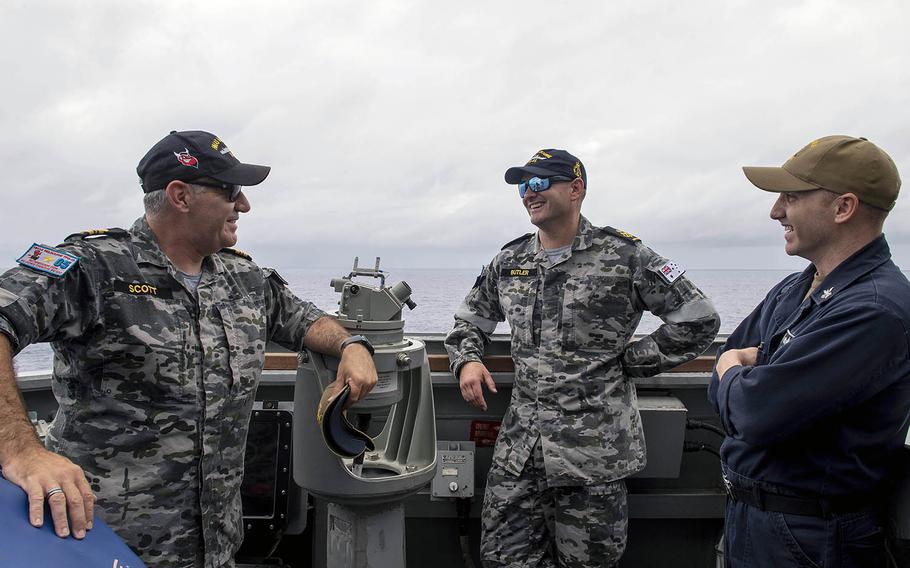 Sailors of the U.S. and Australian navies share conversation aboard the USS Preble during exercises on the Philippine Sea on Thursday, April 18, 2018. (Bryan Niegel/U.S. Navy)

Naval vessels from the United States and Australia recently practiced military maneuvers together in the Philippine Sea.

The destroyer USS Preble and frigate HMAS Melbourne conducted 10 separate drills Friday, the second training operation for both ships in several days, according to a Navy statement.

The drills included procedures for visit, board, search and seizure on vessels at sea; helicopter deck-landing qualifications; rescue-and-assistance drills; and naval tactics, the statement said.

Each naval crew operated alongside its allied counterparts for a better understanding of both ships’ equipment and operating procedures, according to the statement.

“We appreciate the opportunity to operate and train with such high-caliber mariners and military professionals,” Cmdr. Leonardo Giovannelli of the Preble said in the statement. “Because of the close relationship that our two countries share, we were able to execute an incredible amount of valuable training in a short amount of time.”

Prior to the Preble’s arrival, HMAS Melbourne conducted helicopter deck landings with Helicopter Sea Combat Squadron 25 in the Philippine Sea.

Aviators with the Guam-based Island Knights landed two of their MH-60S Knighthawk helicopters aboard the Melbourne, demonstrating both navies’ ability to communicate and operate together, the Navy said in a statement April 16.

U.S. and Australian forces will meet again in summer for Talisman Sabre, a U.S.-Australian exercise that takes place every two years. This year’s drills are scheduled from late June to early August off the east coast of Australia, according to the Australian Defence Department.