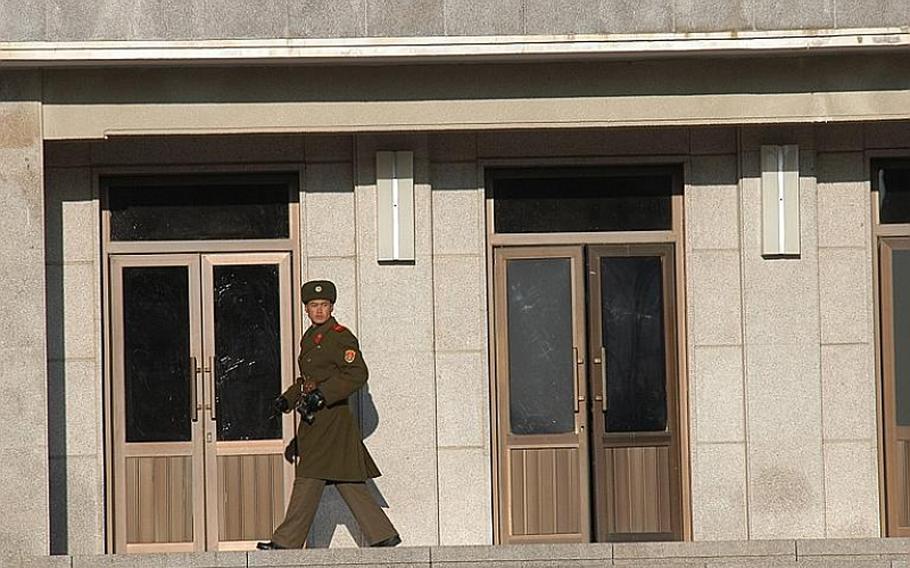 Buy Photo
A North Korean soldier, binoculars in hand, keeps an eye on the South Korean side of the Joint Security Area of the Demilitarized Zone on Dec 22, 2011. After its failed attempt to launch a rocket April 13, 2012, some believe North Korea is planning a nuclear test. (Jon Rabiroff/Stars and Stripes)

SEOUL &mdash; The White House and State Department on Tuesday both urged North Korea not to carry through with suspected plans to conduct an underground nuclear test.

U.S. and South Korean intelligence officials say they have seen evidence of tunneling being done apparently in advance of an underground nuclear test they suspect will be carried out sometime in the next two weeks, according to various media reports.

The preparations come in the wake of the North&rsquo;s unsuccessful April 13 attempt to launch a satellite into space, a move many believed was a cover for the testing of long-range missile capabilities and which was condemned by the United Nations Security Council.

The North has a history of conducting nuclear tests after missile launches, having done so twice before in 2006 and 2009.

During a briefing aboard Air Force One, White House spokesman Jay Carney said, &ldquo;We strongly suggest that the North Koreans refrain from engaging in &hellip; any more hostile or provocative actions.

&ldquo;They do nothing to advance the cause of peace on &hellip; the Korean peninsula (or) Northeast Asia,&rdquo; he said Tuesday, according to a transcript. &ldquo;And they certainly do nothing to help the North Korean people, many of whom are starving because of the predilection of the North Korean regime to spend the money it has on weapons systems rather than food and economic development.&rdquo;

At a U.S. State Department briefing, spokeswoman Victoria Nuland said, &ldquo;No launching, no testing, no nothing if you want to have a better relationship with the international community.

Nuland said it appeared earlier this year that progress was being made in relations with the North but, &ldquo;unfortunately now, we&rsquo;re going backwards. So, it&rsquo;s really up to (North Korea) to demonstrate that it wants a better relationship with all of us and that it wants to put its energy into peace and stability and taking care of its people rather than expensive weapons.&rdquo;

South Korean President Lee Myung-bak and conservative South Korean media outlets also have criticized the rocket launch and the money spent on the North&rsquo;s April 15 celebration of the 100 anniversary of the birth of its founder, the late Kim Il Sung. Instead, the money would have been better spent on the poor people of North Korea, the regime&rsquo;s critics argue.

In response, the North&rsquo;s military issued a threat via its Korean Central News Agency that it would soon carry out &ldquo;special acts&rdquo; that &ldquo;will reduce all the rat-like groups and the bases (basis) for provocations to ashes in three or four minutes &hellip; by unprecedented peculiar means and methods of our own style.&rdquo;

A National Police Agency officer with the Crisis Management and Anti-terrorism Department &ndash; who asked that his name not be used &ndash; said security has been tightened in and around eight South Korean media companies in response to the North&rsquo;s threats.

Specifically, the police spokesman said, approximately 30 officers have been stationed around the clock at each location.