US bases in Japan set for another summer of energy shortages 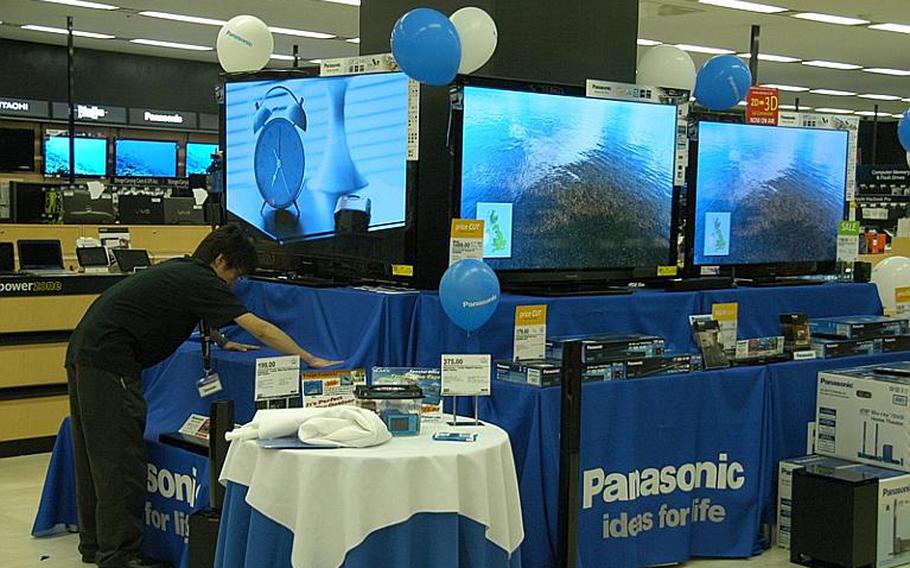 Buy Photo
Televisions on display at the Yokota Base Exchange. An on-base summer energy savings program, such as the one implemented in 2011, will resume in 2012 in an effort to reduce demand for electricity. (Seth Robson/Stars and Stripes)

Safety concerns have led to the shutdown of all but one of Japan&rsquo;s 54 commercial reactors since the March 2011 earthquake, tsunami and nuclear disaster spread radiation across a large area of northeastern Japan. Prime Minister Yoshihiko Noda said last week that his government would try to restart two reactors at the Ohi nuclear power plant in an effort to avert summer power shortages.

However, Japan&rsquo;s Asahi Shimbun newspaper reported on Wednesday that Japan&rsquo;s last operational nuclear power plant is scheduled to go off line for maintenance before the reactors can restart and that the nation will experience its first nuclear-power-free day since the 1970s on May 6.

U.S. military officials in Japan said this week the Japanese government and utility companies have yet to advise them about the potential for energy shortages during peak hours in summer, when many homes and businesses switch on air conditioners. However, officials at Yokota Air Base, who expect their power prices to increase by 18 percent due to the reactor shutdowns, said the Tokyo Electric Power Company could make a request for the U.S. military to reduce its electricity consumption in Japan again this summer.

Last year, bases instituted energy-savings programs from mid-June until October in a successful effort to avert blackouts by cutting peak power consumption by 15 percent or more.

The need to limit electricity use on bases this summer will depend on temperatures and the availability of non-nuclear fuels such as coal, oil and gas for Japanese power plants, the Yokota officials said.

No limits have been set for energy use at the base this summer, but there is potential for limits to be imposed in peak hours, between 11 am and 5 p.m. Other measures that could be implemented at the air base include turning off interior lighting during business hours, adjusting air conditioning, turning off escalators and other non-essential equipment and running public awareness campaigns to encourage energy savings, the officials said.

&ldquo;The assumption is that, because we know a bunch of nuclear plants are down, we can expect to be asked to conserve energy,&rdquo; he said.

&ldquo;We will engage in energy conservation but we won&rsquo;t implement measures that will degrade, exponentially, the quality of life of soldiers or affect the mission of the Army,&rdquo; he said.

People on Army bases in Japan can expect heat and air conditioning to be turned off for three to five weeks as outside temperatures rise. When the summer heat arrives, people&rsquo;s homes will be cooled to the Army standard of 74 degrees. However, thermostats in offices and other on-post buildings will be set at 76 degrees to save power, Mariani said.

Some workers will be authorized fans to keep cool, he added.

Air conditioning will be cooler in places such as health clinics and the Camp Zama Post Exchange, which lacks windows for ventilation, he said.

The Army plan also calls for half of the street and parking lot lights on bases to be turned off, he said.

Mariani said last summer&rsquo;s energy-saving program by U.S. Army Japan cut electricity use by 21 percent and saved $155,000. It was so successful that other garrisons in places like Hawaii, where electricity is expensive, are looking at implementing parts of it, he said.

If TEPCO requests energy savings over the summer, Yokosuka officials plan to modify last year&rsquo;s plan to comply with what is mandated by the government of Japan and U.S. Forces Japan, he said.

Stars and Stripes&rsquo; Elena Sugiyama contributed to this report.