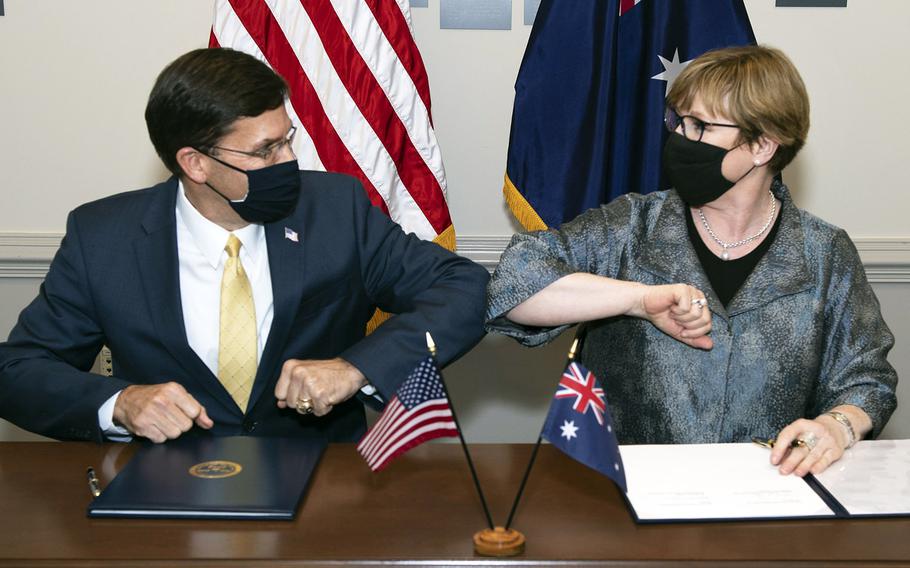 WASHINGTON — U.S. and Australian defense and foreign policy leaders said Tuesday that their close alliance is committed to countering Chinese actions in the Indo-Pacific region where trade and freedom of navigation are key to each country's security.

“Today, we discussed a range of issues regarding the future of the region, including the impact of the global pandemic, as well as the security situation in the South China Sea specifically, and the Indo-Pacific, more generally,” Defense Secretary Mark Esper said during a news briefing following the 2020 Australia-U.S. Ministerial Consultations held at the State Department.

“Our two great democracies face immediate crises like the [coronavirus] pandemic and longer-term challenges like the Chinese Communist Party's ambitions. We need to deal with each of these challenges simultaneously,” Pompeo said.

The Pentagon's 2018 National Defense Strategy has shifted the military’s focus from counterterrorism operations to “great-power competition” with China and Russia. The economic policies of China and its militarization of the South China Sea and Russia’s efforts to undermine NATO and its nuclear arsenal are major concerns for the U.S. military, according to the strategy.

The South China Sea has long been a contested waterway. Ships in the 7th Fleet area of operations regularly conduct freedom-of-navigation and presence operations in the South China Sea where China asserts it has maritime claims over a series of disputed islands. The shipping routes in the region are vital to global commerce and an estimated $3.4 trillion in trade passed through the South China Sea in 2016, according to the Center for Strategic and International Studies, a think tank in Washington, D.C.

More so, tensions between the United States and China have increased in recent weeks. The U.S. requested a Chinese consulate in Houston be closed last week after the U.S. accused China of using the facility for espionage efforts, CNN reported. China then retaliated by requesting the closure of an American consulate in Chengdu.

Throughout July, there have been naval exercises and movements throughout the Indo-Pacific region, including aircraft carriers USS Nimitz and USS Ronald Reagan and their strike groups in the South China Sea conducing drills during the Fourth of July weekend.

“Together we share a common vision for a free and open Indo-Pacific where all nations, big and small, can enjoy the benefits of sovereignty. Where free, fair, and reciprocal trade are the norm. Where states adhere to international rules and norms. And where international disputes are resolved peacefully,” Esper said Tuesday of the U.S. alliance with Australia.

The United States has about 1,200 Marines in Darwin, Australia for training and exercises. Esper avoided providing details on whether there were any discussions to increase the number of Marines deployed there or hosting intermediate range missiles in the country, which the Australian government has said they are against.

Esper would only say he and Reynolds discussed the “capabilities” that each country possess and the “desire to advance them,” including hypersonic weapons.

“I think it's important as we think forward about how do we deter bad behavior in the Indo-Pacific and how we defend the international rules based order, in this case specifically with regard to China,” he said.