US Army Pacific commander will be nominated to lead US Forces Korea, reports say 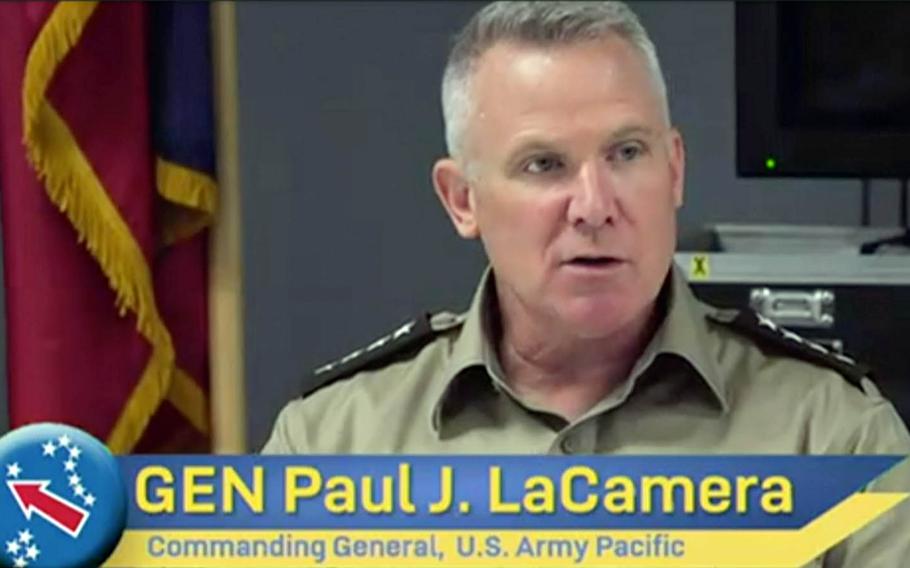 A four-star Army general who led the fight against the Islamic State in Iraq and Syria may be nominated to take command of U.S. Forces Korea, according to multiple media reports.

U.S. Army Pacific commander Gen. Paul LaCamera — named by the Yonhap News Agency on Friday as the likely next leader of U.S. forces on the divided peninsula — is one of the Army’s most experienced combat leaders. The report cited anonymous sources.

The NK News website published a similar report on Tuesday.

However, in a statement Wednesday, USFK spokesman Col. Lee Peters said no official announcement has been made about a new commander and that the reports are speculative.

If nominated and confirmed, LaCamera will succeed Gen. Robert Abrams as commander of 28,500 American troops in South Korea, and as head of the U.N. Command and the South Korea-U.S. Combined Forces Command. Abrams assumed those posts in November 2018.

LaCamera, when he took his post in Hawaii in November 2019, was praised by the head of U.S. Indo-Pacific Command, Adm. Philip Davidson.

“His operational experience is truly unmatched, with more than three decades of service in leadership positions within the infantry, airborne and special operations units,” Davidson said. “He has deployed for longer periods than just about anyone currently serving in the U.S. Army.”

Immediately before he took command of U.S. Army Pacific, LaCamera led America’s campaign against the Islamic State in Iraq and Syria.

LaCamera, when he took command in Hawaii, summed up his philosophy of winning in warfare.