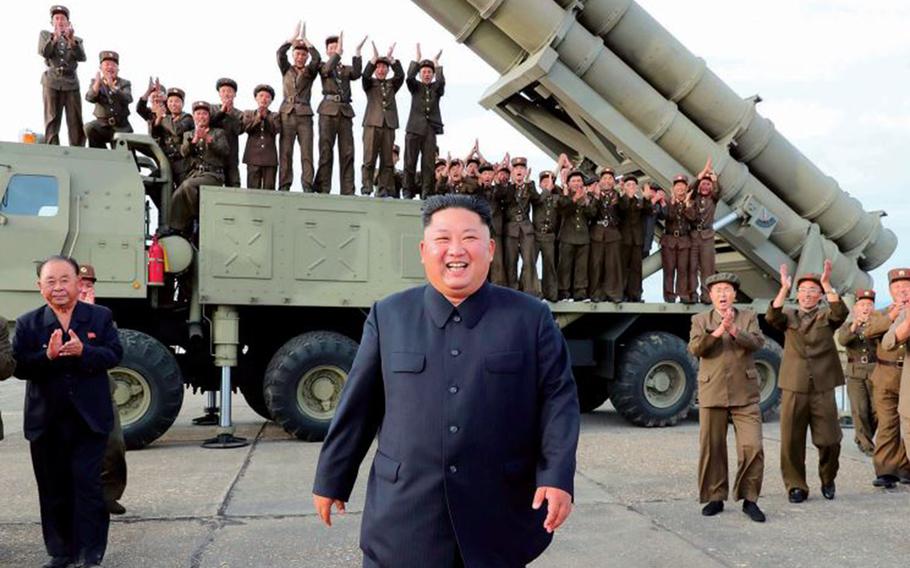 Commercial satellite images of the Yongbyon nuclear scientific center on Oct. 27 indicate “activity has picked up throughout the complex,” including smoke or vapor rising from a building south of the uranium enrichment plant, according to the monitoring website 38 North.

“Historically this building was used to recover and purify uranium from yellowcake and, in some cases, from leaching solutions from uranium mining facilities,” 38 North said. “However, what is taking place now is unclear.”

The Yongbyon facility, north of Pyongyang, is the heart of North Korea’s nuclear weapons program as it produces highly enriched uranium and tritium and houses a 5-megawatt reactor that produces plutonium.

North Korean leader Kim Jong Un dangled the possibility of closing it as a reward for sanctions relief during his second summit with President Donald Trump last year in Hanoi, Vietnam.

However, talks collapsed when Trump refused the deal as experts believe the North has other facilities to produce fissile material to produce weapons.

An uptick in activity would be worrisome as many experts believe the North will likely conduct a missile test or another provocation to test the administration after the U.S. presidential election on Tuesday.

“South Korean and U.S. intelligence authorities are carefully tracking and monitoring related movements while working closely together,” Col. Kim Jun-rak, spokesman for South Korea’s Joint Chiefs of Staff told reporters during a regular briefing. He declined to comment on whether the military had detected any unusual movements by North Korean troops.

The International Atomic Energy Agency, the U.N. nuclear watchdog, also said in September that the production of enriched uranium at Yongbyon appeared to be continuing, citing emissions from the building.

The North also has shown other signs of continuing to develop nuclear weapons, including showing off a huge, new intercontinental ballistic missile during a military parade, as U.S.-led diplomatic efforts have failed to persuade it to stop.

Yongbyon has long stood as a symbol of the inability of the international community to rein in the North’s nuclear ambitions despite decades of initiatives. The North suspended production at the facility as part of separate deals with former President Bill Clinton and later with George W. Bush, but the freeze was short-lived as tensions rose.

The smoke or vapor emanating from the building was different from previously reported construction and flood damage repairs after a series of typhoons earlier this year, 38 North said.

The building has housed the refractory furnaces used to produce uranium dioxide, a key part of the enrichment process, according to the analysis by Frank Pabian, Peter Makowsky and Jack Liu.

“This activity is consistent with observations reported in the IAEA’s most recent report,” it said. “Whether these emissions are indications of (uranium dioxide) production or some other operation is unclear.”