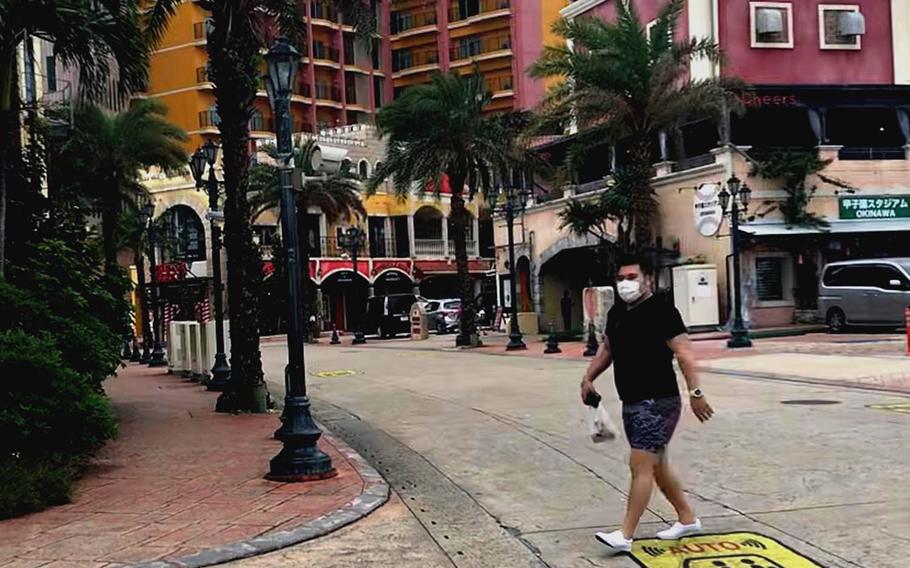 TOKYO — The U.S. military in Japan reported 16 new cases of COVID-19, the coronavirus respiratory disease, all but four on Okinawa, by 6 p.m. Tuesday.

Osaka prefecture, the home of Japan’s second-largest city, along with Hyogo and Miyagi prefectures has imposed new “quasi-emergency” measures that include fines for restaurants and other businesses that ignore an 8 p.m. to 5 a.m. curfew.

Misawa Air Base, in northeast Japan, had one person test positive for COVID-19 after returning from a trip to Osaka, according to a base news release Monday. That person is quarantined. The base had not announced a new coronavirus patient since Jan. 22, when it reported three.

Marine Corps Air Station Iwakuni had three people, none of them isolated, test positive since Monday, according to a base Facebook post. They have since been quarantined. The base provided no further information.

On Okinawa, Kadena Air Base has 12 newly infected people, according to a base Facebook post Monday evening. A hike in new patient numbers at U.S. bases on Okinawa starting in mid-March led the 18th Wing commander, U.S. Army Japan and the Marine Corps to reimpose bans on some off-base activities, including outdoor and indoor dining.

Of Kadena’s new patients, nine tested positive after close contact with a previously infected person; two came up positive in mandatory tests before traveling to the U.S.; and the 12th became ill with symptoms of COVID-19, according to the wing. An unspecified number of close contacts were quarantined.

So far in April, Kadena has announced 43 new COVID-19 patients, one more than it reported in March.

Yokota Air Base, the headquarters of U.S. Forces Japan in western Tokyo, on Tuesday canceled its Friendship Festival for the second year in a row due to the ongoing pandemic.

“The decision was made now in order to accommodate the time and effort required to prepare and plan this event,” the 374th Airlift Wing said in a statement. “The Friendship Festival continues to be an important annual event celebrating the invaluable bond between the members of Yokota Air Base and the local communities, and we are optimistic that in May of 2022 we will have the best opportunity to host this incredible event.”

MCAS Iwakuni, near Hiroshima, in February also canceled its Friendship Day this year for a second year.

The base commander, Col. Lance Lewis, in a Facebook post Tuesday said anyone covered by the status of forces agreement will soon have an opportunity to be vaccinated. SOFA covers U.S. service members, Defense Department civilian employees and contractors and family members.

“We are rapidly approaching a point where we can offer COVID vaccinations to the entire SOFA population,” he wrote. “Starting this week, vaccinations will be available to the remainder of our personnel – to include dependents. I strongly encourage each of you to get the vaccine.”

Yokosuka Naval Base, 35 miles south of Tokyo, announced Tuesday that it had no known individuals infected with the coronavirus. Six people who contracted the virus have recovered since Friday, according to the installation.