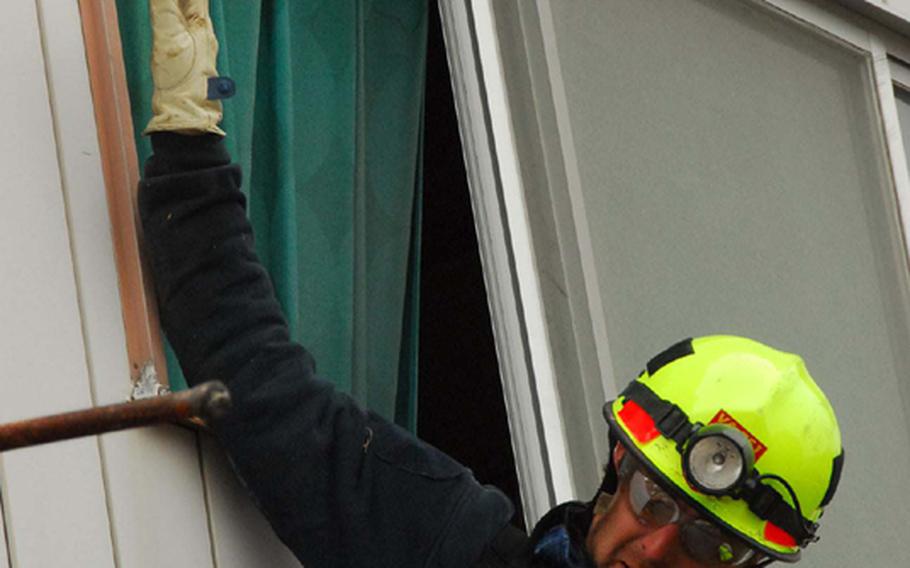 Buy Photo
Tom Carver, rescue specialist with Fairfax County Search and Rescue, shimmies through a gap between a collapsed home's roof Tuesday in Ofunato, Japan, to search for survivors of a deadly earthquake and tsunami. (Travis J. Tritten/Stars and Stripes)

Buy Photo
Tom Carver, rescue specialist with Fairfax County Search and Rescue, shimmies through a gap between a collapsed home's roof Tuesday in Ofunato, Japan, to search for survivors of a deadly earthquake and tsunami. (Travis J. Tritten/Stars and Stripes) 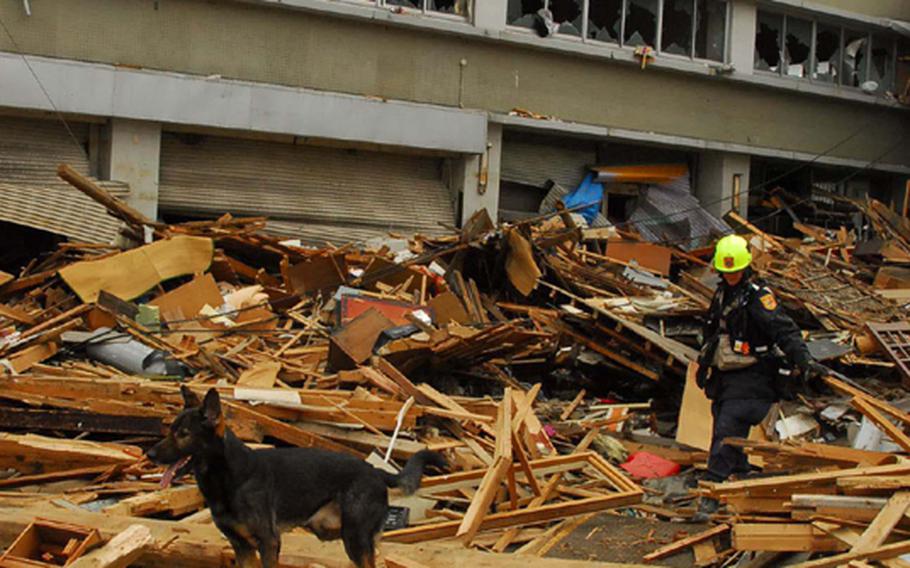 Buy Photo
Atticus, a trained rescue dog, and her owner Jennifer Massey, a canine search specialist with Virginia's Fairfax County Search and Rescue, climb over rubble Tuesday morning searching for survivors of deadly tsunamis in Ofunato, Japan, a city of 41,000 about 260 miles northeast of Tokyo. (Travis J. Tritten/Stars and Stripes) Buy Photo
Tom Carver, rescue specialist with Fairfax County Search and Rescue, walks past a damaged building that has been searched and cleared during U.S. disaster rescue efforts in Ofunato, Japan on Tuesday. (Travis J. Tritten/Stars and Stripes) 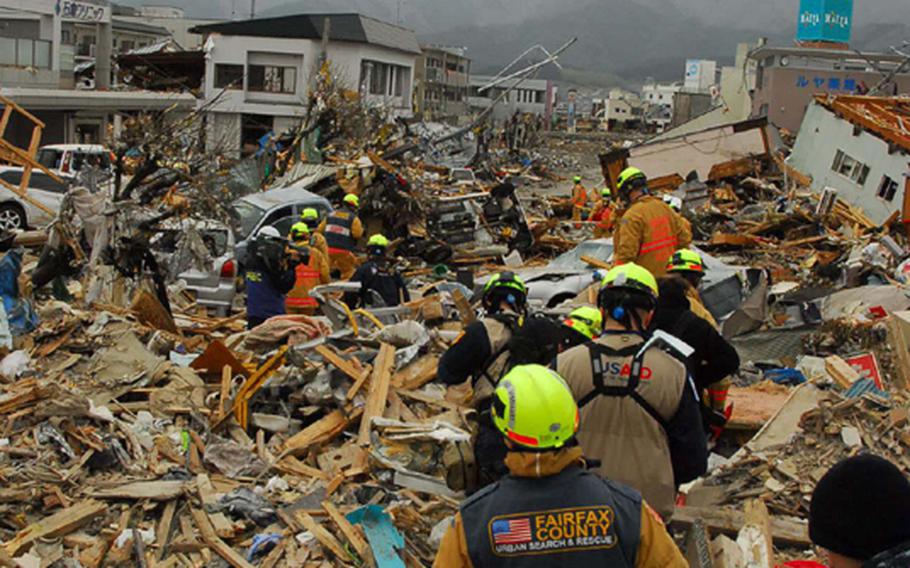 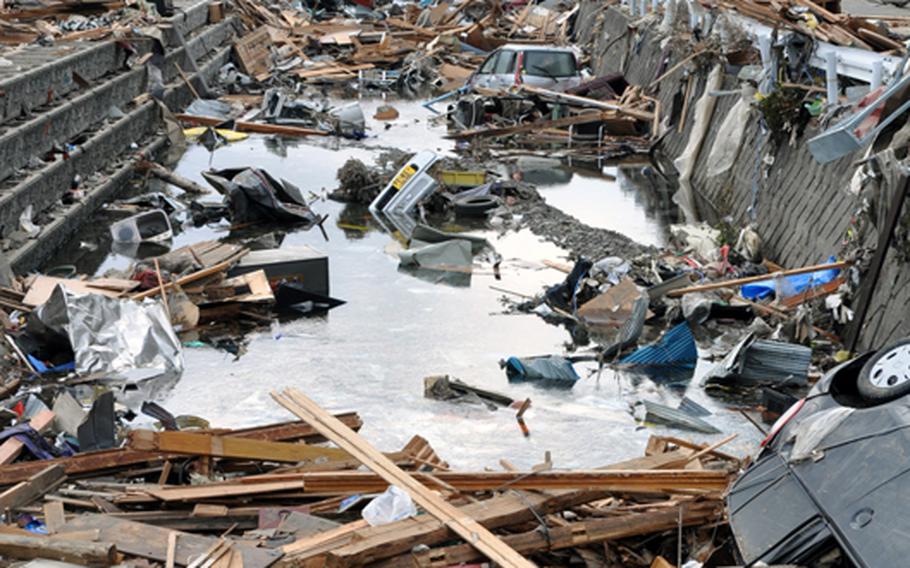 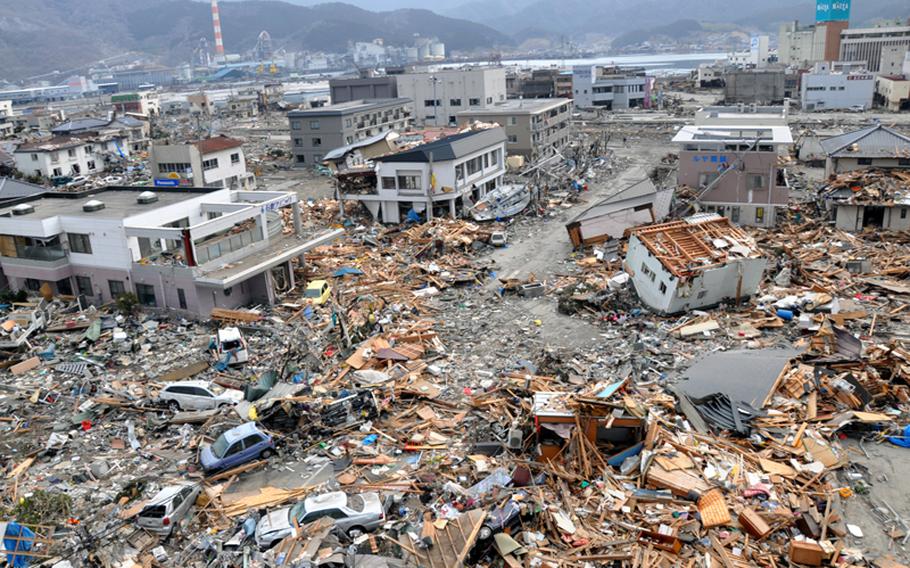 Buy Photo
Residents of Ofunato village, Japan, pass search-and-rescue personnel who were combing the collapsed houses and acres of debris for survivors of the March 11 earthquake and follow-on tsunamis that ravaged the fishing port. (T.D. Flack/Stars and Stripes) Buy Photo
Rescue worker Elizabeth Kreitler and her search dog, Racker, on Tuesday work their way through the debris of a one of nearly 3,500 homes destroyed March 11 when an earthquake and follow-on tsunamis ravaged the coastal fishing town of Ofunato, Japan. (T.D. Flack/Stars and Stripes) 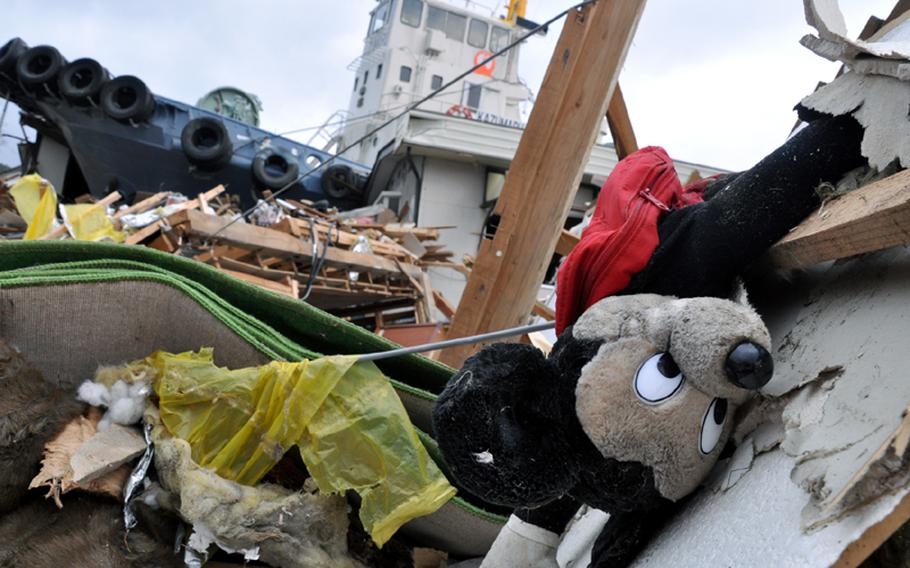 Buy Photo
A Mickey Mouse doll sits in rubble in front of a tug boat that landed in the middle of a residential neighborhood in Ofunato village, Japan, during a March 11 earthquake and follow-on tsunamis. (T.D. Flack/Stars and Stripes) Buy Photo
Virginia-based search-and-rescue workers look for the best way to get on top of an apartment building in the fishing village of Ofunato, Japan, during earthquake and tsunami relief efforts Tuesday morning. (T.D. Flack/Stars and Stripes) 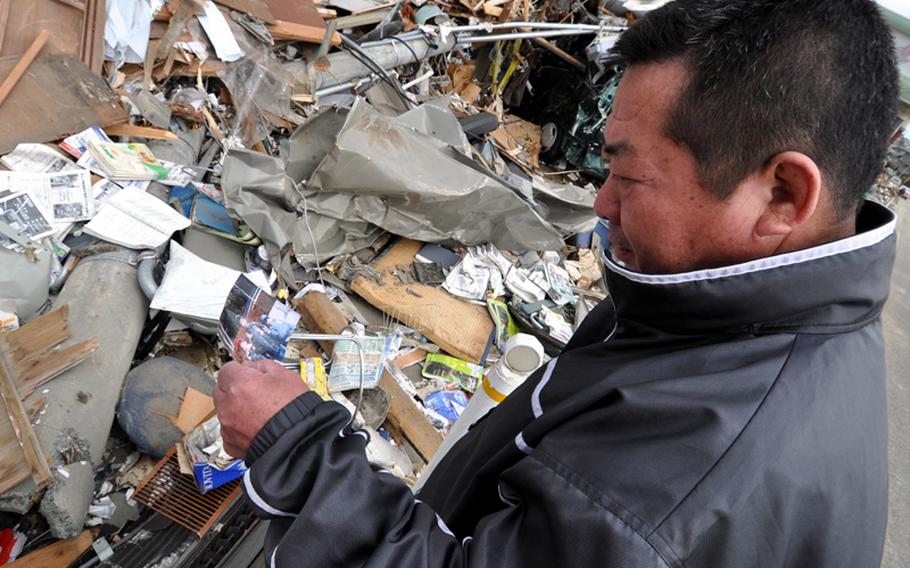 Buy Photo
Takushi Tokai, a resident of Ofunato, Japan, looks at a picture of his family he found near the wreckage of his house on Tuesday. Nearly 3,500 homes were totally destroyed when a earthquake and tsunamis hit the fishing village on Friday. (T.D. Flack/Stars and Stripes) 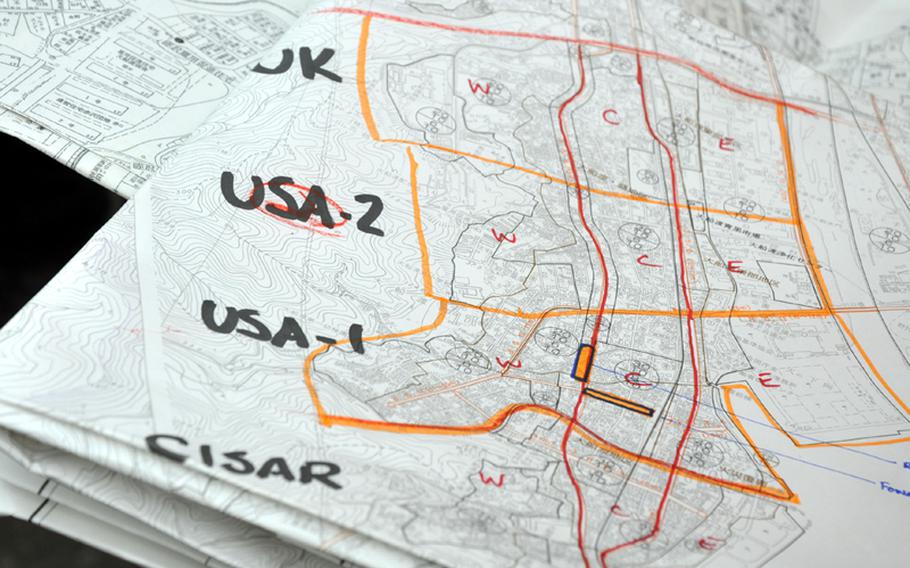 OFUNATO, Japan &mdash; A U.S. search-and-rescue team was picking its way through a demolished neighborhood in this coastal village Tuesday when it found a desperate message scrawled on the wall of a collapsed home.

The message said an 88-year-old woman had been on the first floor Friday when tsunamis swept through, tossing vehicles, splintering buildings and carrying away hundreds of victims.

The elite USAID search team from Fairfax County, Va., immediately called for rescue dogs and fellow team specialists who were carrying snaking camera gear that could peer into the 2&frac12;-foot space beneath the home.

In a 40-minute methodical search, team members found nothing. They could only mark the house with an international symbol indicating that they had not located the woman, who remains among nearly 200 city residents still missing four days after Japan&rsquo;s largest recorded earthquake.

Expectations of finding survivors in Ofunato were dim as about 200 foreign rescue workers, including teams from Los Angeles and the Washington, D.C., area, filtered into the village at daybreak Tuesday to begin combing through buildings and rubble.

Lack of drinking water and the freezing winter weather in northern Japan also are decreasing the chances of finding survivors, Knerr said.

Meanwhile, the Los Angeles County Fire and Rescue team said it had found two bodies in a residential area Tuesday morning. The bodies were tagged with GPS coordinates, which will be provided to the Japanese government.

No other units reported finding any casualties &mdash; dead or alive &mdash; after six hours of effort. The U.S. teams, here at the request of the Japanese government, said they would continue the search throughout the day.

The Iwate prefecture disaster headquarters estimated that by Tuesday morning there were 200 deaths and 191 people still missing in the city, about 260 miles northeast of Tokyo. More than 8,400 people were evacuated and 3,500 homes were completely destroyed, the prefecture office said.

On March 11, a magnitude-9.0 earthquake was followed by tsunamis that chewed through the northeastern coast. Hundreds of aftershocks have left the country reeling. The death toll could exceed 10,000, according to Japanese authorities. Meanwhile, the country continues to struggle with damaged nuclear reactors north of Tokyo that threaten to spread radioactive fallout.

America&rsquo;s response to Japan&rsquo;s request for help was to send the only two U.S. search-and-rescue teams authorized to work on foreign disasters. They arrived at Misawa Air Base in northern Japan on Sunday and were transported Monday by the U.S. Air Force seven hours south to Ofunato along highways mostly deserted except for military emergency convoys.

The U.S. rescue teams &mdash; veterans of some of the world&rsquo;s worst disasters, including the Haiti earthquake &mdash; sectioned off parts of the city into search grids and began building-by-building searches. They broke windows, smashed down locked doors, scaled large debris piles and shimmied into crawl spaces searching for residents who might have survived the water and four days of winter weather.

Residents had only about 15 minutes to recover from the shock of the earthquake and heed wailing sirens urging them to flee to higher ground before a 33-foot surge of churning, deadly seawater swallowed much of downtown.

Not all of the city of 41,000 was destroyed by the disaster.

The tsunami carried a tug boat into the alley of a residential neighborhood, swept a car onto the roof of a bank and ground buildings into piles of muddy, splintered wood. But parts of the city on higher ground escaped damage.

&ldquo;The tsunami went all the way up there,&rdquo; said Takushi Tokai, pointing a few hundred yards up the hill from where his house had been.

Everything above the waterline was safe. Nearly everything below was destroyed.

Tokai chose to stay in his home after the earthquake despite the tsunami warning sirens, thinking his home sat high enough above the Ofunato Bay to avoid the onrushing ocean. He survived, but his home did not.

On Tuesday, he and his family sorted through the debris where his house had been uprooted from its foundations.

&ldquo;It&rsquo;s not like Haiti where everything fell down from the earthquake,&rdquo; said Tom Carver, a rescue specialist with Fairfax County Fire and Rescue, who was searching buildings near the city waterfront. &ldquo;Everything stayed standing [during the earthquake] but then was hit by the water.&rdquo;

As the U.S. search teams worked, they also faced the constant threat of damaged buildings collapsing and new tsunamis caused by the constant earthquake aftershocks along the coast.

Rex Strickland, operations chief for the Fairfax unit, said his team would keep working through the dangers and search for any survivors despite the odds.

&ldquo;Until the government of Japan tells us to stop, we&rsquo;ll keep working,&rdquo; said.

Stars and Stripes&rsquo; Hana Kusumoto contributed to this report.