U.S. relief mission likely will do little to ease tensions over Futenma 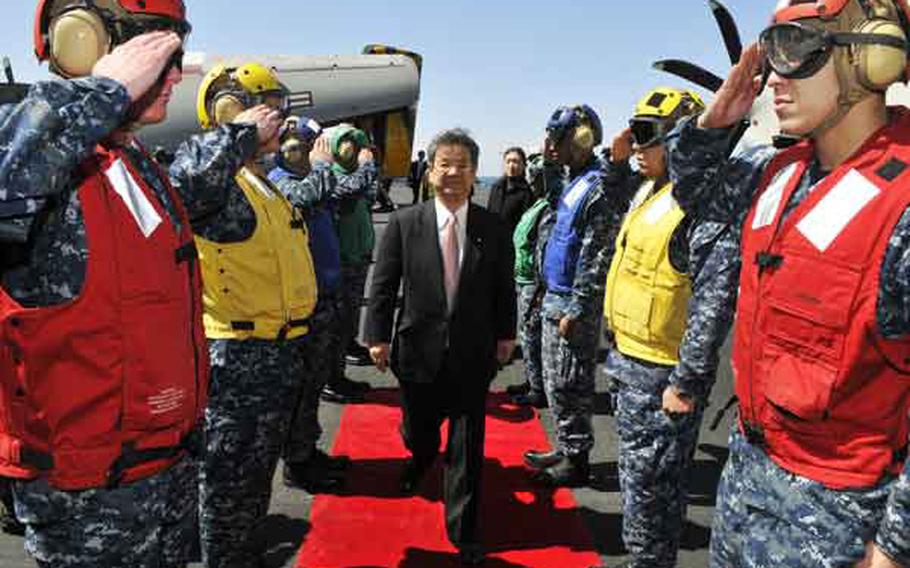 CAMP FOSTER, Okinawa &mdash;When Japan&rsquo;s defense minister visited the USS Ronald Reagan a few days ago, he thanked the U.S. military for its role in relief efforts in the weeks since the March 11 earthquake and tsunami.

For its part, the United States has pushed thousands of servicemembers, scores of helicopters and groups of warships to the northeast coast of Japan to provide any assistance requested to help overcome the country&rsquo;s worst disaster in generations.

But even though Defense Minister Toshimi Kitazawa told reporters that the &ldquo;earnest desire of Americans and U.S. servicemembers to save Japan&rdquo; was a defining event in the 50-year-old U.S.-Japan alliance, all the public goodwill and military aid might not be enough to overcome the thorniest political impasse between the two nations &mdash; the relocation of Marine Corps Air Station Futenma on Okinawa.The relief operation might have increased acceptance of the U.S. military on the mainland,&rdquo; said Shusei Arakawa, a former Okinawa City mayor. &ldquo;But those people cannot see the daily suffering that Okinawan people have been forced to undergo for decades.&rdquo;Okinawan opposition to the Marine Corps air station has become a potent and resilient political force in recent years &mdash; toppling a prime minister and threatening a historic U.S. military realignment in the Pacific. Now, it appears to be weathering a massive natural and nuclear disaster that has brought Japan and the U.S. closer than at any time in recent memory.

&ldquo;The disaster-hit areas are far away from Okinawa. There is no need for Marines to stay here to go to the mainland to give support,&rdquo; said Hiroshi Ashitomi, a member of a group of Okinawa residents who oppose the Futenma air station. &ldquo;If the military wants to help Japan in relief operations &hellip; they can move to Camp Fuji, the closer location.&rdquo;

Ashitomi&rsquo;s group donated money to disaster survivors, and there is sympathy on Okinawa for the despair and loss on the mainland. But that has not translated into support for the U.S. military presence here.

On Japan&rsquo;s southernmost island prefecture, memories of a military helicopter crash at a local university in 2004 and the rape of a 12-year-old girl by two Marines and a sailor in 1995 still linger.

Many here want the air station, which is located in a densely populated area in central Okinawa, to be moved off the island.

Despite a major U.S. military aid effort &mdash; including Marine Corps supply airlifts from Futenma beginning a day after the quake &mdash; it appears unlikely Okinawan sentiment will change following the disaster, said Masaaki Gabe, a professor of international relations and director of the International Institute for Okinawan Studies at the University of the Ryukyus.

For many, the role the U.S. military has played in the relief efforts on the mainland cannot justify maintaining a Marine Corps presence hundreds of miles south on Okinawa, Gabe said.

Meanwhile, the U.S. and Japanese government have been struggling to make good on the 2006 agreement to move Futenma farther north to a quiet beach area in the city of Nago, a key piece of a larger planned realignment of forces in the Pacific that aims to move 8,600 Okinawa Marines and their families to Guam by 2014.

Tensions between Japan and the U.S. over Futenma reached a crescendo in 2009 when a new liberal government in Tokyo bowed to Okinawan pressure and promised to move the base off Okinawa. Last year, the head of the party, Prime Minister Yukio Hatoyama, resigned because he could not follow through on the promise.

There appeared to be a glimmer of hope for the U.S. in February when Defense Secretary Robert Gates said Japan was making good progress on planning the Futenma move after two years of uncertainty and political friction.

&ldquo;My hope is that we will get resolution, particularly on the configuration of the airfield or the runways perhaps later this spring,&rdquo; Gates told the House Armed Services Committee on Feb. 16. &ldquo;And that would then allow us to go forward with our planning.&rdquo;

But Japanese attention to the Futenma relocation project has been distracted by the disaster.

&ldquo;There is no time for that now,&rdquo; a spokesman for Japan&rsquo;s Ministry of Defense said Thursday.

The ministry could not immediately say whether the Japanese government will request a delay on the project from the United States or whether it will meet Gates&rsquo; time line.

&ldquo;While this lack of progress is disappointing, it does not undermine the ability of [U.S. Pacific Command] to maintain trained and ready forces in the region or to fulfill U.S. treaty obligations to Japan,&rdquo; Willard said. &ldquo;Meanwhile, U.S. forces will continue to operate from the existing facility at Futenma Marine Corps air station while U.S. PACOM works with Department of Defense leadership and the Japanese to find a solution acceptable to both nations.&rdquo;

Meanwhile, Okinawa is steeling itself for the time when discussion on Futenma air base inevitably resurfaces.

Those on the mainland &ldquo;will never know what we have been going through to support the alliance,&rdquo; Arakawa said.