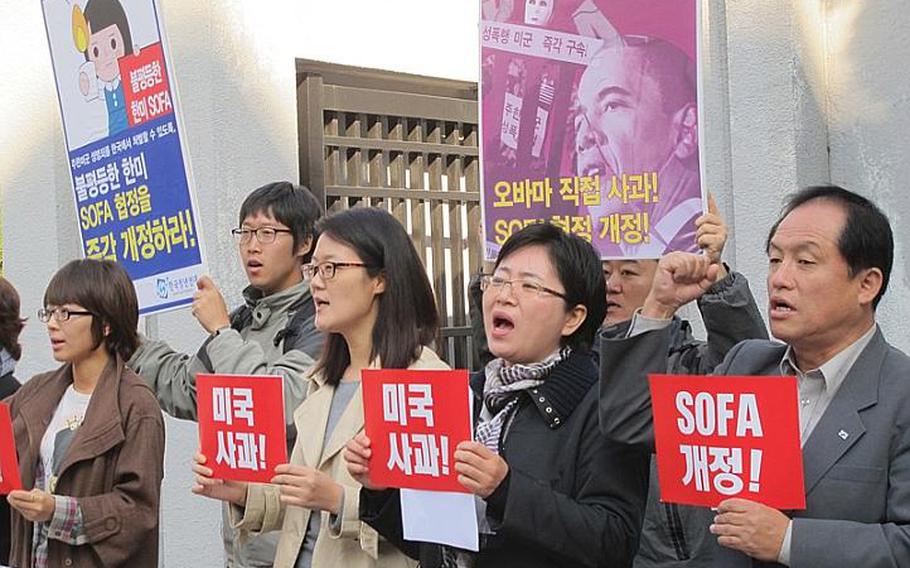 SEOUL - The U.S. military announced Tuesday that it is indefinitely extending an off-installation curfew for all servicemembers in South Korea.

Beginning Saturday, curfew hours will be from 1 to 5 a.m. every day, a modification of the current curfew. Until now, troops were not allowed in off-base establishments from midnight to 5 a.m. weekdays and from 3 to 5 a.m. on weekends and holidays.

A 30-day curfew was put in place Oct. 7 by U.S. Forces Korea commander Gen. James Thurman, following a rash of incidents involving members of the U.S. military community, including two high-profile rape cases involving U.S. troops. One of those servicemembers, Pvt. Kevin Lee Flippin, was sentenced in November to 10 years in prison for raping and brutalizing a South Korean teenager in her boarding house.

Flippin's case, as well as rape allegations against a second soldier, prompted widespread anger from the public, some lawmakers and the media against the U.S. military presence, complaining that the military was not doing enough to curb troop misbehavior.

In the wake of the rape cases, several U.S. officials issued apologies for Flippin's actions, and U.S. and South Korean military officials met to discuss possible changes to the Status of Forces Agreement between the two countries, which many South Koreans have said allows servicemembers to commit crimes with impunity.

After the outcry, the curfew was extended in November through Jan. 6.

A press release issued Tuesday by USFK said the curfew will be in place "until further notice" and is meant "to ensure continued mission readiness and to assess the current operational environment."

"We must remain focused on our primary mission here, which is to deter against external aggression and if required, defend the Republic of Korea side-by-side with our ROK counterparts," Thurman stated in the release. "I anticipate and expect that our service members will continue to maintain the highest standards of individual readiness and professionalism while they serve in the Republic of Korea."

The curfew will apply to all U.S. troops in South Korea except those attached to the U.S. Embassy or the Joint U.S. Military Affairs Group-Korea. Military family members, Department of Defense civilians and contractors, as well as their family members and visitors, are encouraged to abide by the curfew, according to USFK.

Thurman decided to extend the curfew after consulting with other high-ranking military officials, and he will continue to assess the situation, the press release stated. Commanders can also enact a more restrictive curfew policy or supplement it with other measures.

"U.S. law enforcement personnel throughout Korea will continue to work closely with their Korean National Police counterparts for assistance with curfew monitoring and enforcement," according to the release.

USFK spokesman Jason Chudy said the curfew was a force-protection measure, not a request by South Korea.

Previous USFK commander Gen. Walter Sharp, who is retired, rescinded an unpopular 9-year-old curfew in July 2010, saying it was unnecessary and troops could be trusted to behave appropriately outside their installations.