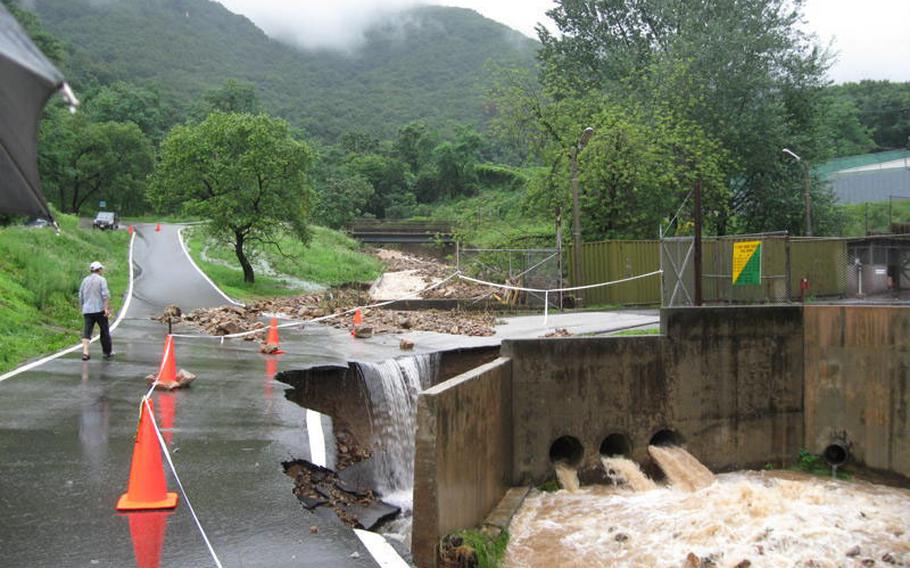 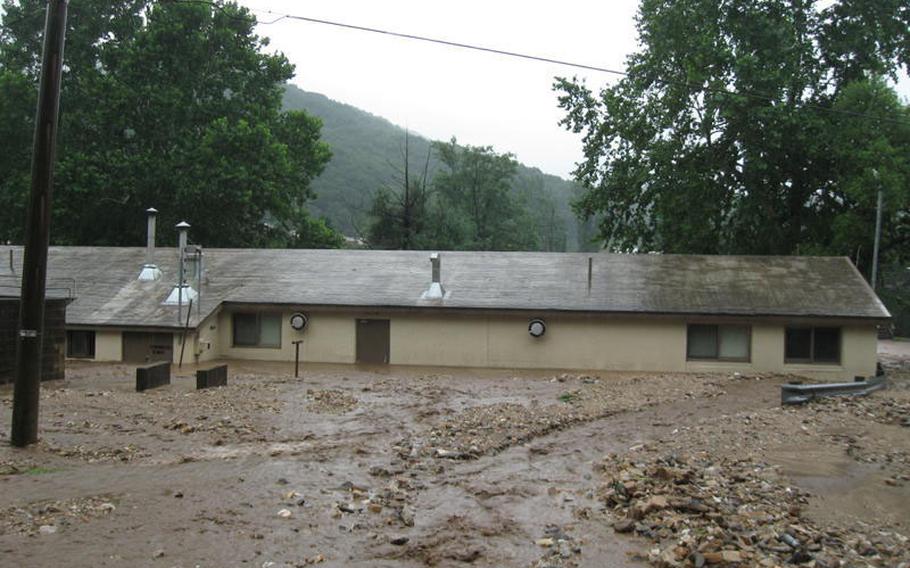 Mud from one of four landslides at Camp Casey in South Korea surrounds a building July 28, 2011. Heavy rains in recent days have wreaked havoc across South Korea, and effectively closed a couple of U.S. military bases there. (Courtesy of the U.S. Army) 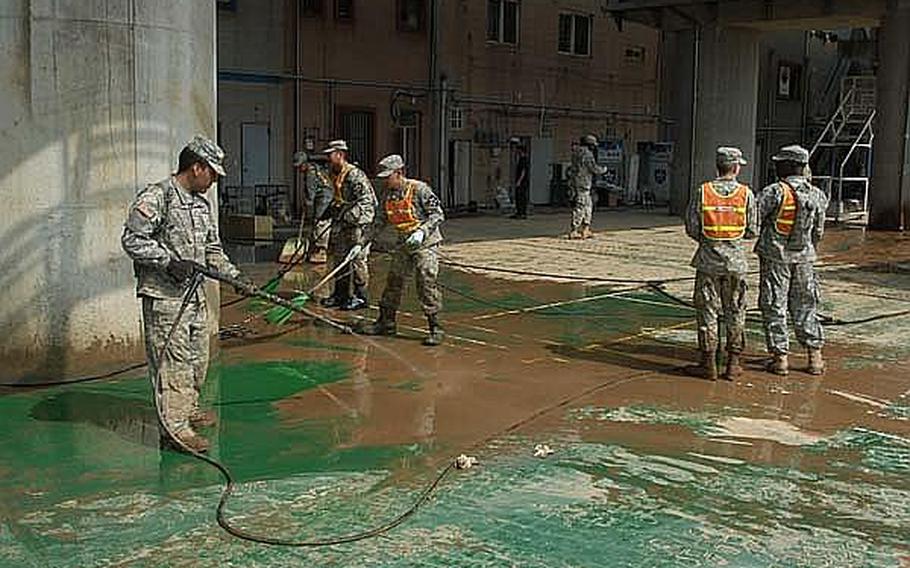 Buy Photo
Soldiers from the 2nd Infantry Division on Friday help clean up The Ville, an entertainment district across from Camp Casey in South Korea that was flooded this week after heavy rains pounded the peninsula. (Jon Rabiroff/Stars and Stripes) 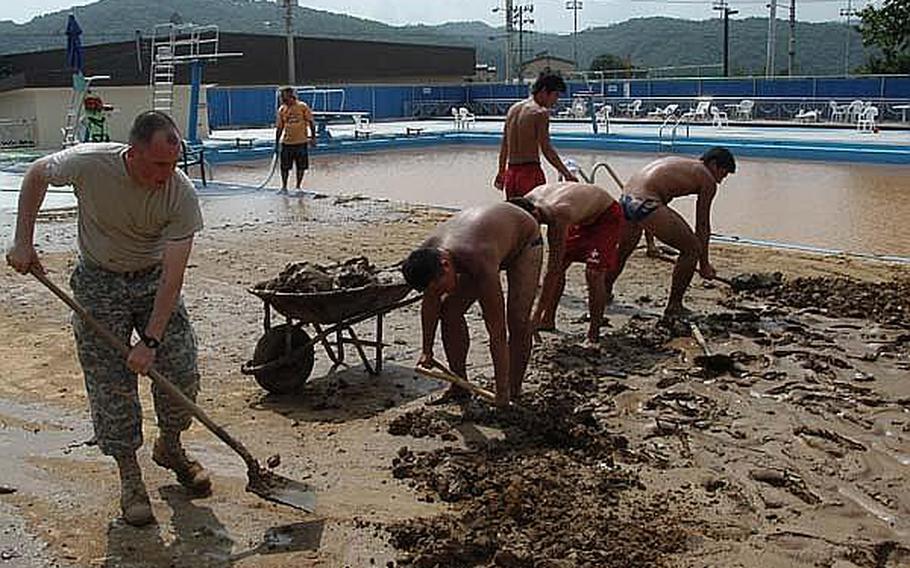 Buy Photo
Soldiers and staff shovel up mud left by a landslide in and around the pool at Hanson Fieldhouse at Camp Casey, South Korea. Three days of heavy rains this week were blamed for dozens of deaths across the peninsula, and caused extensive damage at three U.S. military bases in Dongducheon. (Jon Rabiroff/Stars and Stripes) 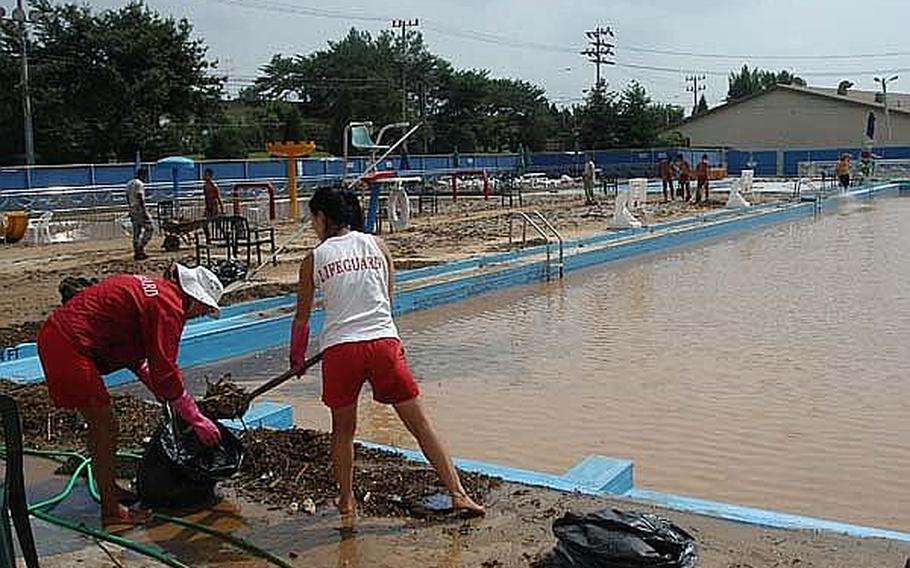 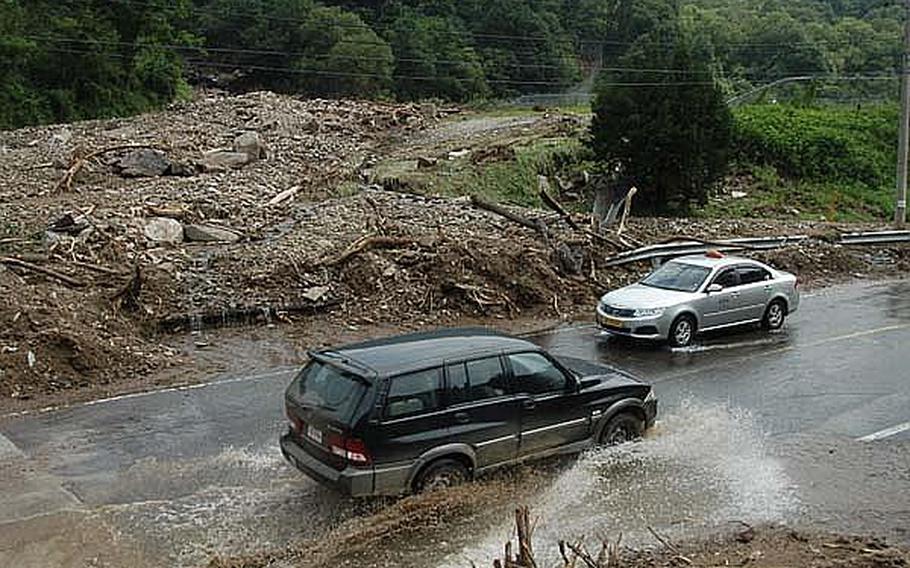 Buy Photo
Vehicles drive Friday through an area of Camp Casey, South Korea, that was closed to traffic the day before because of mud and debris left by a landslide on the base. Heavy rains this week caused several landslides on the base, and caused extensive damage at two other bases north of Seoul. (Jon Rabiroff/Stars and Stripes) 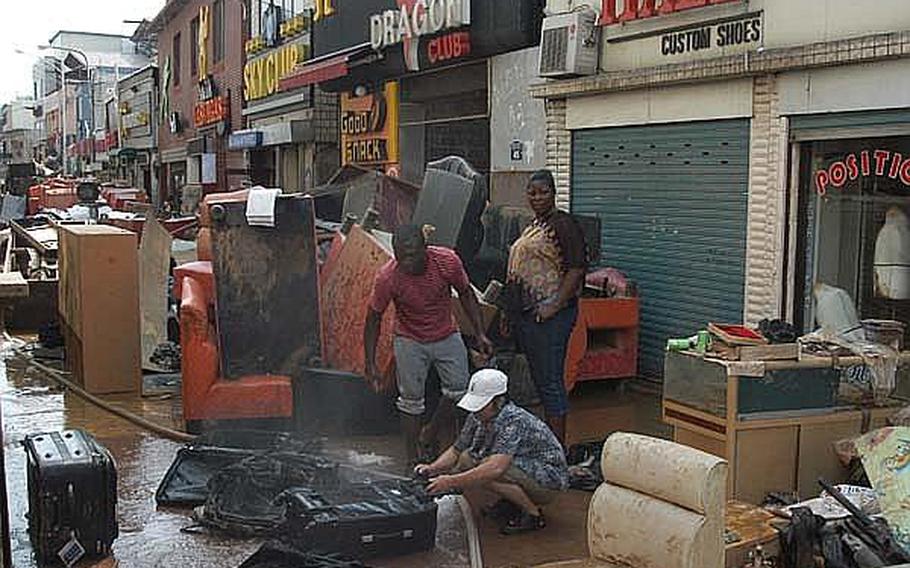 Buy Photo
People on Friday hose down furniture and other belongings damaged when floodwaters as high as 8 feet hit The Ville, an entertainment district across from Camp Casey, South Korea, known for its dozens of "juicy bars." On Friday, 2nd Infantry Division soldiers left Camp Casey to help in the cleanup of The Ville. (Jon Rabiroff/Stars and Stripes) 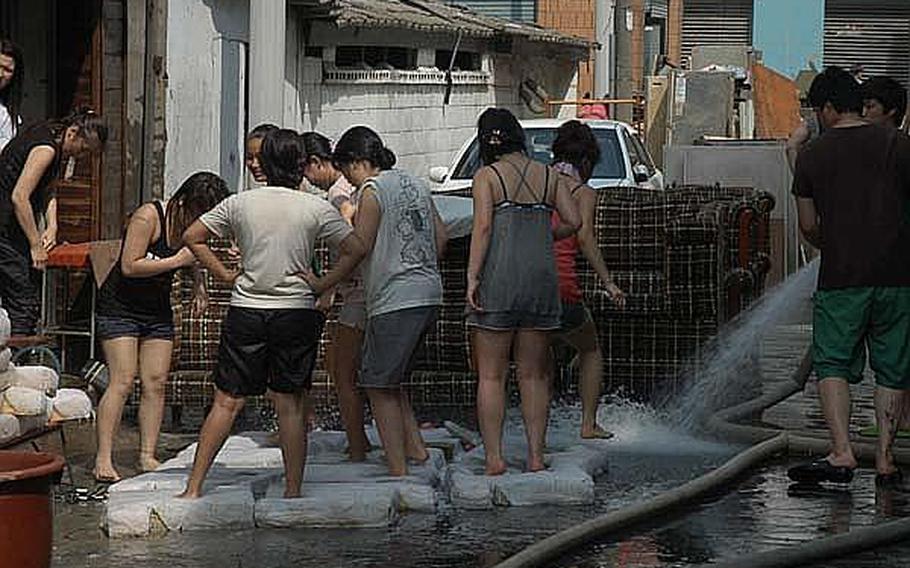 Buy Photo
Hostesses from one of The Ville's "juicy bars" stomp the water out of furniture cushions Friday near Camp Casey, South Korea. (Jon Rabiroff/Stars and Stripes) 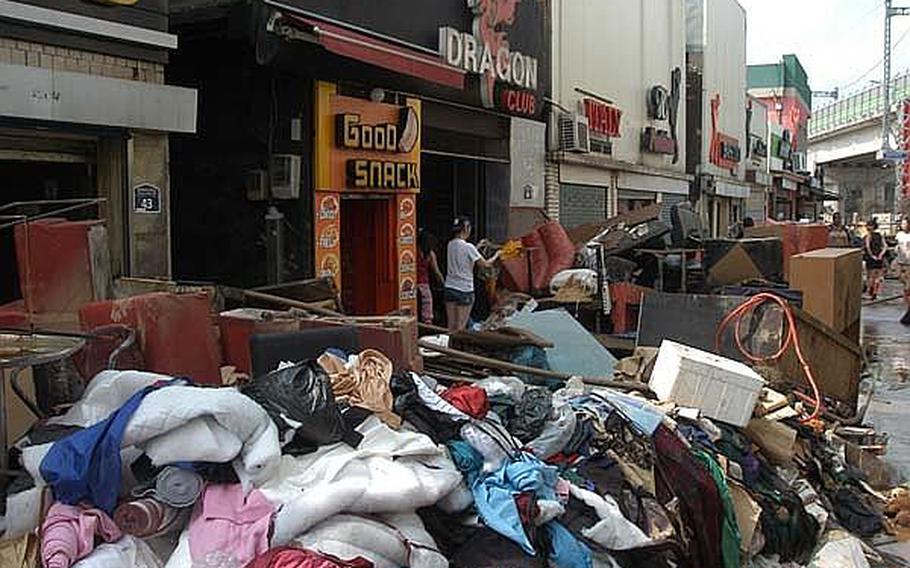 Buy Photo
Waterlogged and mud-covered furniture and merchandise are piled high outside businesses in The Ville, an entertainment district outside Camp Casey that was flooded by heavy rains in South Korea this week. (Jon Rabiroff/Stars and Stripes)

SEOUL &mdash; As the death toll continued to rise from this week&rsquo;s massive rainstorm in South Korea, the U.S. military on Friday was trying to get a handle on just how extensive the storm&rsquo;s impact had been on its three bases in Dongducheon.

U.S. Army Garrison-Red Cloud spokesman Kevin Jackson said it was too early to put a dollar figure on the damage or say exactly when things would be back to normal at camps Casey, Hovey and Mobile, about 40 miles north of Seoul.

&ldquo;We&rsquo;re still working on that,&rdquo; Jackson said, adding that Area I commander Col. Hank Dodge &ldquo;expects and hopes a significant amount of progress is made today.&rdquo;

&ldquo;But, long-range, it will take some time,&rdquo; Jackson said.

On Friday, power and water was still out at Camp Mobile &mdash; largely a warehouse facility &mdash; where a couple of hundred thousand dollars&rsquo; worth of supplies were ruined by flood waters, he said. Power, water and sewer service was gradually being restored to various areas affected at the nearby and adjacent camps Casey and Hovey, he said.

Crews had cleared roadway connecting the two bases that was partially covered by a 200-yard, 20-foot-deep debris field left from a landslide, Jackson said. However, there was still lots of clearing and cleaning left to be done where landslides left mud and debris covering the Casey swimming pool area, fieldhouse gym and roadways.

Another problem is that the wall surrounding parts of Casey has been breached in a number of places, forcing the base to either put up concertina wire or station soldiers to stand guard in those areas, he said.

&ldquo;We have made a fair amount of progress (so far),&rdquo; Jackson said. &ldquo;But, clearly, it is going to take awhile to get all this cleaned up.&rdquo;

Meanwhile, about 250 2nd Infantry Division soldiers from Camp Casey were deployed outside the base Friday to help with the cleanup in Dongducheon. Soldiers and some of their spouses went to work in perhaps the hardest hit area of the city, The Ville, the entertainment district across from Casey&rsquo;s main gate that is home to dozens of &ldquo;juicy bars.&rdquo;

At the height of the storm, flood waters climbed as high as eight feet in some areas of The Ville. On Friday, the streets there were filled with waterlogged furniture and belongings that had either been discarded or were being dried out.

On Friday afternoon, authorities said at least 69 people had been killed or were missing due to flooding and landslides caused by three days of excessive rains across the peninsula.

The South Korean defense ministry said mines placed on a mountain in Seoul in the 1960s could have shifted could have shifted because of landslide, The Associated Press reported. Soldiers with metal detectors were waiting to search for the reported 10 mines that could have been pushed down Wumyeon Mountain in southern Seoul, defense officials said.

There were fears of land mines in northern provinces also hit by flooding and slides, prompting the Joint Chiefs of Staff to order mine-search operations where needed.

Separately, North Korea&rsquo;s state media reported that heavy rains have hit much of the country and destroyed homes and buildings.

Impoverished North Korea is susceptible to damage from heavy rains due to poor drainage and deforestation. Floods in 2007 left some 600 people dead or missing and about 100,000 others homeless.

AP reported that the landslide Wednesday in southern Seoul killed at least 18 people. About 5,000 firefighters, soldiers, police officers and others mobilized Thursday to try to find any survivors and clean walls of mud piled in neighborhoods near the base of the mountain, emergency official Kim Wu-min said.

Another landslide early Wednesday killed 10 college students sleeping in a resort cabin in Chuncheon, north of Seoul. The students from Inha University in Incheon, just west of Seoul, were volunteering at a local elementary school.

The National Emergency Management Agency reported 18 more deaths because of a stream flooding and landslides elsewhere in towns near Seoul, according to the AP. No deaths of foreigners have been reported.

The rainfall left almost 5,000 people homeless, flooded about 1,380 houses and caused power outages at more than 125,000 homes throughout the country, the agency said in a statement Thursday.