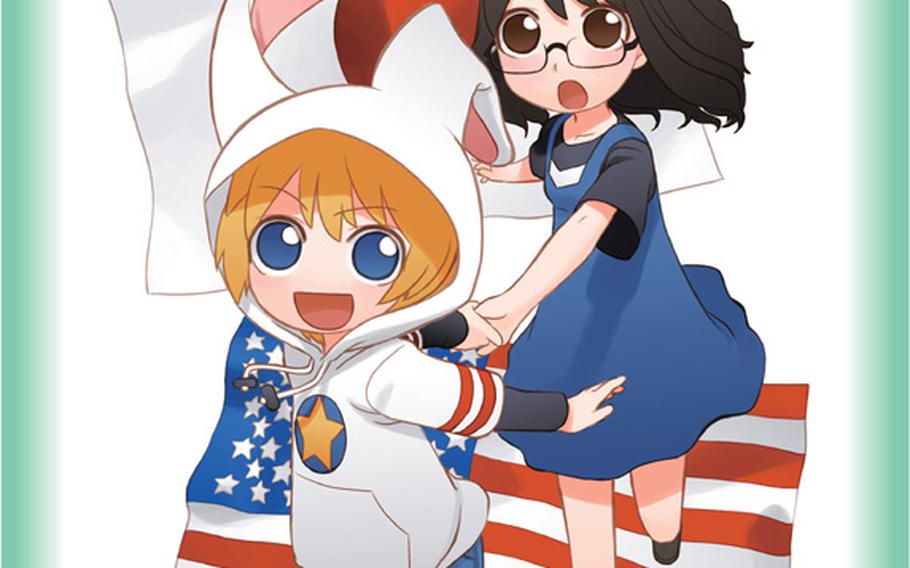 "Our Alliance — A Lasting Partnership” was produced by U.S. Forces Japan and is the first in a four-part series. It is being printed only in Japanese and is meant to highlight the U.S.-Japan security alliance in the popular and easy-to-read comic–book format known as manga. (Courtesy of U.S. Forces Japan)

YOKOTA AIR BASE, Japan &mdash; &ldquo;Mr. USA&rdquo; and &ldquo;Alliance&rdquo; will debut Wednesday as the heroes of a new Japanese-style comic book aimed at educating Japanese about the U.S.-Japan security alliance.

The villain: a pesky cockroach.

&ldquo;Our Alliance &mdash; A Lasting Partnership&rdquo; was produced by U.S. Forces Japan and is the first in a four-part series. It is being printed only in Japanese and is meant to highlight the bilateral partnership in the popular and easy-to-read comic&ndash;book format known as manga.

It weaves the metaphorical story line of the American boy and Japanese girl with panels explaining Japan&rsquo;s pacifist constitution, its self-defense forces and the 50-year-old Treaty of Mutual Cooperation and Security, which essentially allows the U.S. military to operate in Japan in exchange for defending the island nation.

In the story, the blonde-haired, blue-eyed Mr. USA (Usa-kun in the book) kills a cockroach for Alliance (Arai Anzu), a Japanese girl who is hosting the boy during his stay in Japan.

&ldquo;Next time, we will get rid of cockroaches together!&rdquo; Mr. USA says.

Alliance refuses, then adds: &ldquo;But I&rsquo;m happy that there is a friend with me so that I can feel safe.&rdquo;

The book comes at a time when many Japanese citizens and leaders are questioning the size and scope of the alliance between the two countries. In recent months tensions have deepened, prompting the resignation this spring of Prime Minister Yukio Hatoyama after he failed to keep a campaign promise to move U.S. Marine Corps air operations off of Okinawa.

Roughly 20,000 copies of &ldquo;Our Alliance&rdquo; will be distributed by U.S. military installations throughout mainland Japan and Okinawa, said Marine Master Sgt. Donald Preston, a USFJ spokesman. It also will be available online at www.usfj.mil/manga.

While touting the alliance as the linchpin of Asian security has not necessarily gotten easier for the United States in the 50 years since it was forged, it&rsquo;s certainly gotten cuter, using manga characters to sway opinion.

The U.S. Navy first released a manga in June 2008 to help subdue safety and environmental concerns about the arrival of the nuclear-powered aircraft carrier USS George Washington to Yokosuka Naval Base.

The story of Petty Officer 3rd Class Jack Ohara in &ldquo;CVN-73&rdquo; not only humanized the sailors of the George Washington but also helped dispel &ldquo;misinformation&rdquo; about risks of nuclear-powered ships, said Jon Nylander, spokesman for Commander U.S. Naval Forces Japan.

For the most part, &ldquo;CVN-73&rdquo; got &ldquo;a lot of people interested in the George Washington&rdquo; in a positive way, Nylander said. It drew some expected criticism from hard-line opponents of the carrier and the U.S. military presence in Japan, most of whom would likely never waver from their positions, Nylander said.

Activist Masahiko Goto could be considered one such critic. Goto, an attorney who leads a group opposed to the George Washington docking in Japan, said the Navy&rsquo;s manga lacked an opposing view.

&ldquo;Every military operation has a risk,&rdquo; he said Monday. &ldquo;We would like [the U.S. military] to disclose some negative information. We think that promotes the relationship in the long term.&rdquo;

Although the Navy did not study how the manga affected overall public opinion, manga fans waited in line outside the naval bases to get copies, and only about 25 of the 30,000 copies printed remain at headquarters at Yokosuka, Nylander said.

At least three copies were found on Yahoo! Japan&rsquo;s auction website Tuesday. Owners were asking from 500 to 5,000 yen &mdash; about $5 to $50 &mdash; per copy but so far none had received a bid.

Manga became mainstream media in Japan in the late 1970s and 1980s, evolving from a cheap means of entertainment in the post-World War II era to a political forum in the 1960s to the pop culture institution it is today, said Patrick Galbraith, a media researcher at Tokyo International University who will teach a class on manga this fall.

&ldquo;It&rsquo;s a pretty good strategy to present the American military strategy through manga, because it&rsquo;s such a popular medium,&rdquo; he said.

Many manga serials are published weekly in telephone book-sized volumes, with story lines tailored for people of all ages and interests. The format resonates so deeply with the Japanese that it is also often used as a teaching tool, Galbraith said.

&ldquo;People who read manga tend to talk about manga so it&rsquo;s much more effective than a pamphlet or even a website,&rdquo; he said.