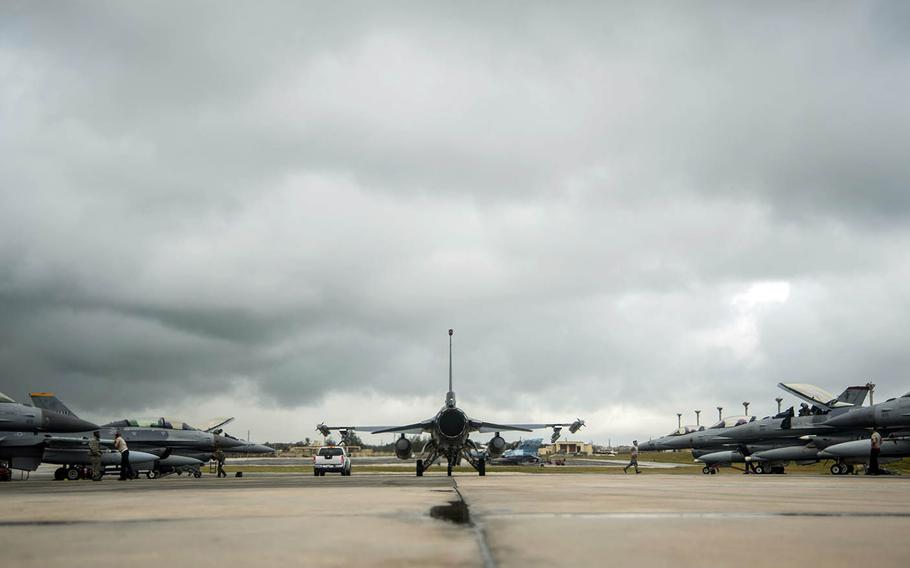 A typhoon has forced the Air Force to pause a large-scale exercise involving nearly 100 aircraft and almost 3,000 U.S., Australian and Japanese servicemembers out of Andersen Air Force Base, Guam.

“COPE North 2019 paused Feb. 22 as a precautionary measure due to hazardous conditions and potentially damaging winds caused by Typhoon Wutip,” the Air Force said in a statement Friday.

The Joint Typhoon Warning Center upgraded Wutip, with winds of 75 mph and gusts up to 90 mph, to a typhoon that day. It was forecast to pass 167 miles southwest of Andersen at 5 a.m. Sunday, possibly as a Category-3 storm.

“For the safety and security of assets, aircraft will either bed down at Andersen Air Force Base, Guam, or relocate to alternate locations until the weather is more favorable for safe operations,” the Air Force statement said.

Servicemembers on Guam had been conducting humanitarian-assistance and disaster-relief training this week.

The storm provided them with an opportunity to swiftly implement an inclement weather plan for aircraft and test their ability to rapidly maneuver throughout the theater at a moment’s notice, Col. Jason Cockrum, U.S. COPE North 2019 exercise director and 35th Fighter Wing operations group commander, said in the statement.

“Typhoon Wutip is an opportunity to demonstrate the airpower the three nations provide, and the multilateral alliance is overcoming this weather challenge through deliberate planning and disciplined execution,” he said.

The exercise, which began Monday and is scheduled to run until March 8, will resume once conditions improve, the Air Force said.