Two Koreas to prepare for another summit amid stalled nuclear talks 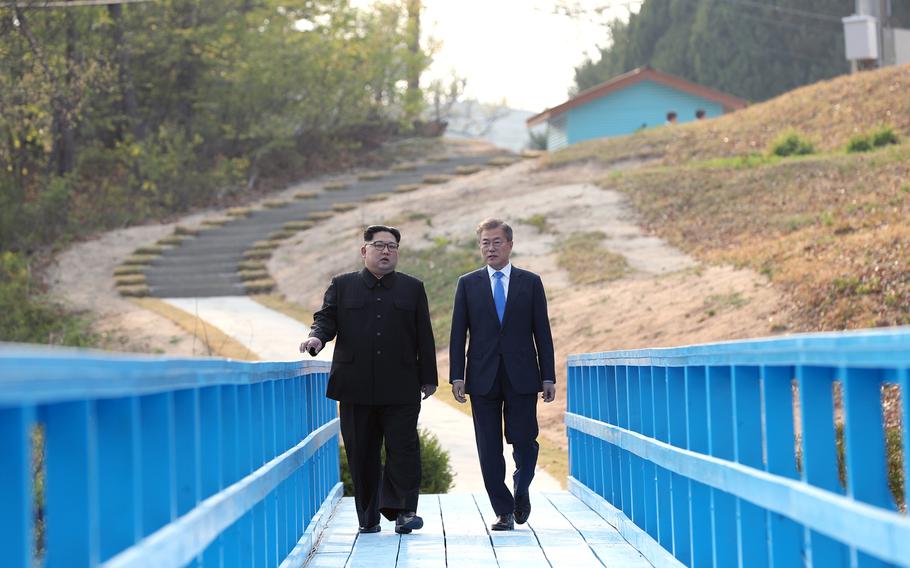 SEOUL, South Korea – The two Koreas have agreed to hold high-level talks Monday to prepare for another summit between their leaders, even as nuclear talks between the North and the United States have stalled.

Unification Minister Cho Myoung-gyon will lead the South Korean delegation to the meeting on the northern side of the truce village of Panmunjom, which straddles the heavily fortified border, the ministry said Thursday.

The North offered to hold the talks but has yet to announce its chief delegate, a ministry official said, speaking on condition of anonymity in line with department policy. The two sides planned to discuss preparations for another summit as well as review the implementation of agreements made during the first one on April 27.

South Korean President Moon Jae-in and North Korean leader Kim Jong Un met again in a more informal summit in late May. Both of those meetings – which were the first inter-Korean summits in more than a decade – were held in Panmunjom.

A third inter-Korean summit has been highly anticipated since the two leaders promised to meet in Pyongyang this fall during their first meeting in April, which marked a high point in the resurgence of diplomatic efforts with the long-isolated North.

President Donald Trump later met with North Korean leader in Singapore, the first-ever summit between the two countries that technically remain at war.

But the U.S. administration has grown frustrated with the lack of progress in persuading Pyongyang to take concrete measures after agreeing at the June 12 meeting only to a general commitment to the “complete denuclearization of the Korean Peninsula.”

North Korea has suspended missile and nuclear tests, blown up its nuclear testing site and begun dismantling a major launch site, although experts have cautioned that those steps may be reversible. The communist state also returned 55 cases said to contain the remains of U.S. troops killed during the 1950-53 war.

But skepticism over its motives has grown amid a spate of reports that it’s continuing to develop intercontinental ballistic missiles that could target the U.S. mainland, and that it’s trying to hide its activities.

Trump, meanwhile, has halted joint war games with South Korea that had been scheduled to take place this month. But the administration insists it won’t lift punishing economic sanctions, as requested by the North, until a deal is reached.

Nikki Haley, the U.S. ambassador to the United Nations, warned that patience was growing thin.

“This is all in North Korea’s court,” she told reporters traveling with her Wednesday during a visit to Colombia.

Haley said the U.S. has made “solid” demands of the North and will maintain the sanctions, meant to punish the North for its nuclear weapons program, until they’re met.

North Korea is seeking a more phased approach to the deal-making and recently has stepped up calls for a formal end to the war, which saw fighting stop following the signing of an armistice instead of a peace treaty.

Analysts have cautioned that the two sides have sharply different definitions of denuclearization. Washington seeks the end of the North’s nuclear weapons program, while the North seeks the removal of the U.S. threat, which many believe would include the withdrawal 28,500 American troops on the divided peninsula.