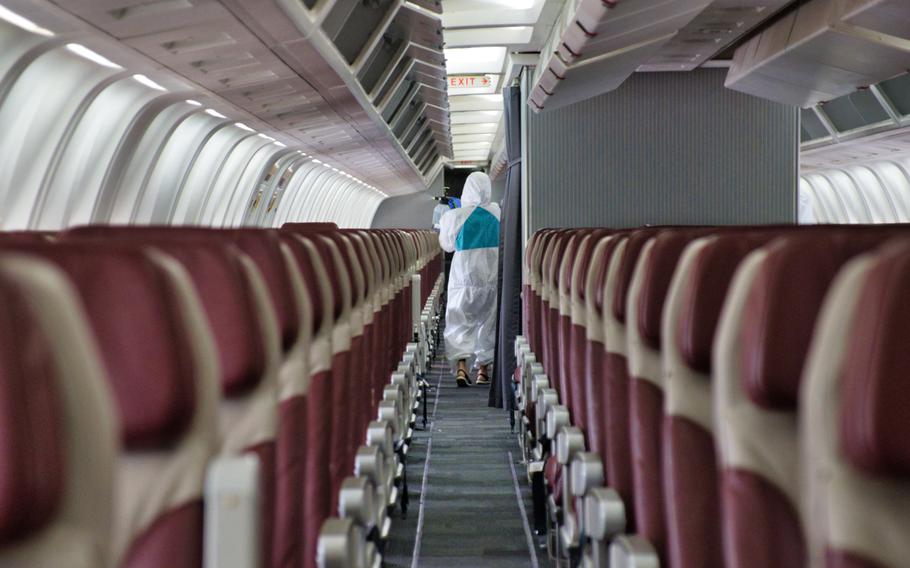 A sanitation crew works to disinfect the Patriot Express at Osan Air Base, South Korea, July 14, 2020. (Matthew Keeler/Stars and Stripes)

The announcement came as many teachers and education officials are returning to the peninsula after taking leave ahead of the Aug. 24 start of the school year.

The two Department of Defense Education Activity employees tested positive after arriving Tuesday on a commercial flight at Incheon International Airport, according to U.S. Forces Korea. It didn’t say where the flight came from.

The service member landed Monday at Osan Air Base on a government-chartered flight that originated in the United States, USFK said.

The confirmed cases raised to 126 the total number of USFK-affiliated personnel to have contracted COVID-19, the respiratory disease caused by the virus, since late February.

Only 24 of those were infected in South Korea. The others tested positive after arriving for new assignments or returning from trips abroad, most from the United States.

Everybody who arrives in South Korea must be tested for the coronavirus and undergo a two-week quarantine. USFK also mandates that personnel test negative before they’re allowed to exit quarantine.

The three individuals announced Thursday received positive results on their first test and have been transferred to an isolation facility designated for confirmed COVID-19 patients on Camp Humphreys, the main Army base in South Korea, USFK said.

USFK health professionals have determined the need for contact tracing in these cases is limited because of the strict testing and quarantine process for all passengers.

“None of the new arrivals have interacted with anyone residing within USFK installations or the local community,” the command said.