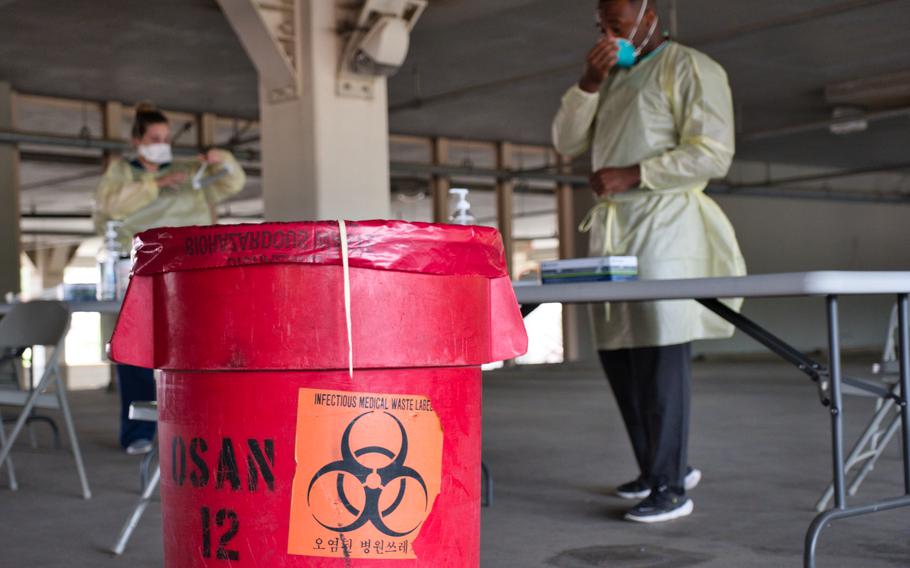 OSAN AIR BASE, South Korea — The total number of coronavirus cases associated with U.S. Forces Korea rose to 123 on Monday after seven service members and five dependents arriving in South Korea between July 14 and 24 tested positive, according to a USFK news release.

Five service members and three dependents arrived at Osan Air Base on government-chartered flights from the United States on July 14, 19, 20 and 22, according to the release.

The remaining four — two service members and two dependents — arrived on separate commercial flights at Incheon International Airport from the United States on July 22 and 24, it said.

Everyone tested positive entering the mandatory two-week quarantine upon arrival into the country, except for two individuals. The two tested negative on their first test when they arrived in the country but were tested again, this time with positive results.

All 12 have been moved to isolation rooms at either Camp Humphreys or Osan, depending on their service branch.

USFK health professionals determined none of the new arrivals had contact with anyone beyond administrative and medical staff after their arrival, according to the release.

Some 28,500 service members are stationed in South Korea, which remains technically at war with the North after their 1950-53 conflict ended in an armistice instead of a peace treaty.