Trump: Talks with N. Korea will be about eliminating nukes, ‘not just a freeze’ 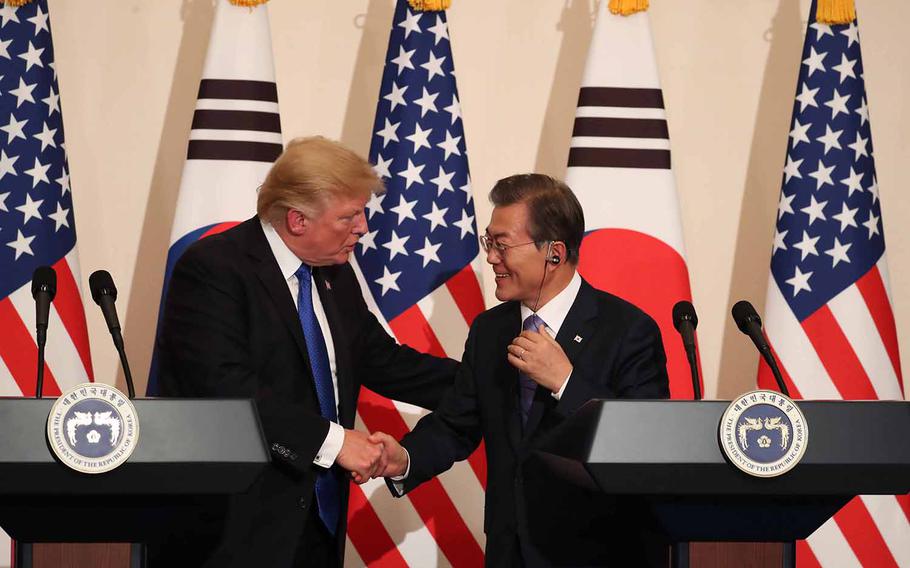 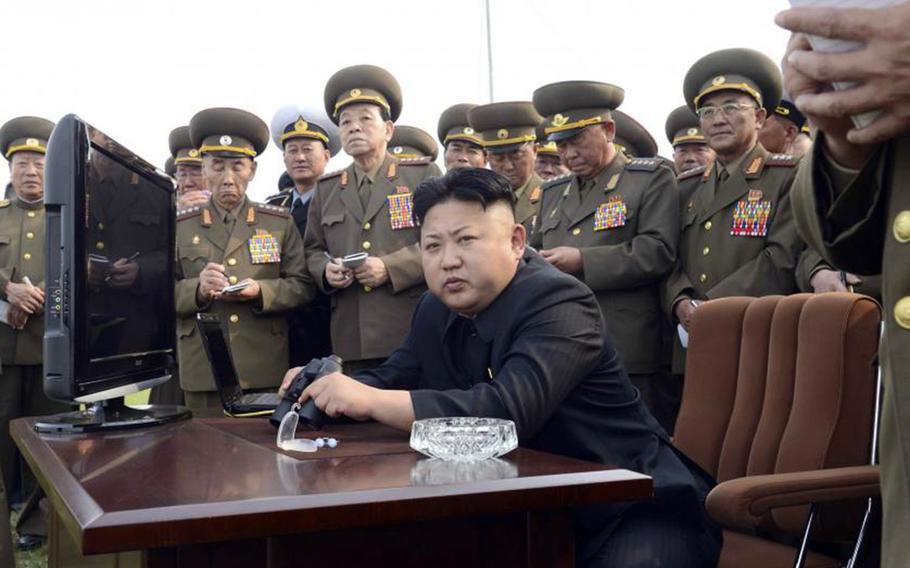 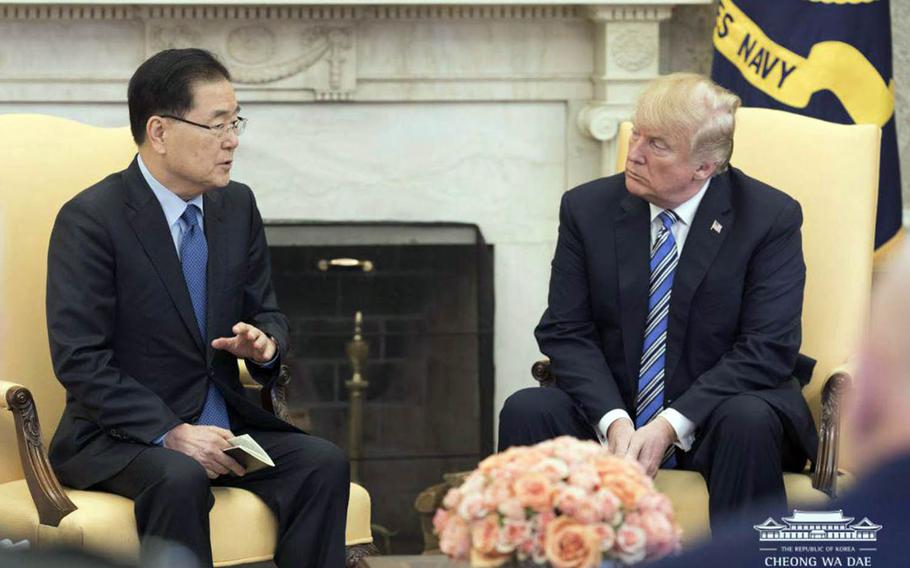 SEOUL, South Korea — In a stunning about-face after months of insults and threats, President Donald Trump agreed to meet with North Korea’s leader by May after the communist state committed to denuclearization and promised to suspend its testing program, U.S. and South Korean officials said Friday.

It would be the first summit between a North Korean leader and a sitting U.S. president in nearly seven decades of hostile relations. South Korean President Moon Jae-in called it a “miraculous opportunity.”

Trump was cautiously optimistic and said sanctions imposed to punish the North for its nuclear weapons program would remain in place until a deal is reached.

“Great progress being made but sanctions will remain until an agreement is reached. Meeting being planned!” he tweeted without giving details about the date or where it would take place.

Kim Jong Un talked about denuclearization with the South Korean Representatives, not just a freeze. Also, no missile testing by North Korea during this period of time. Great progress being made but sanctions will remain until an agreement is reached. Meeting being planned!

It’s a major diplomatic victory for Moon, who has worked hard to bring the two adversaries to the table and will hold his own summit with Kim in the tense border area in late April.

Moon said the meetings “will put the complete denuclearization of the Korean Peninsula finally on track and will be remembered as a historic milestone which will contribute to achieving peace on the peninsula in the future.”

Moon, the son of North Korean refugees, also expressed his “profound gratitude” to Kim and Trump, saying the two leaders “made a difficult decision reflecting their courage and wisdom.”

Kim said he was committed to the denuclearization of the divided peninsula and promised to refrain from any further nuclear or missile tests, South Korea’s National Security adviser Chung Eui-yong told reporters gathered on a White House driveway.

He also said the North Korean leader “understands that routine joint military exercises between [South Korea] and the United States must continue. And he expressed his eagerness to meet President Trump as soon as possible.”

“President Trump appreciated the briefing and said he would meet Kim Jong Un by May to achieve permanent denucleariztion,” Chung added.

Chung didn’t take questions and many questions remained after months of saber rattling and brinkmanship that included a threat from Trump to “totally destroy North Korea” if forced to defend the U.S. and its allies.

Chung gave Trump credit for the apparent breakthrough, saying “his leadership and his ‘maximum pressure’ policy, together with international solidarity, brought us to this juncture.”

Trump later wrote that the North Korean leader had talked about denuclearization, not just a freeze of his weapons programs, in addition to a moratorium on missile tests.

North Korea has in the past insisted its nuclear program is not up for negotiation and many lawmakers and officials were skeptical that its position has changed.

The breakthrough appeared to catch the State Department and other administration officials off guard.

Just hours earlier, Secretary of State Rex Tillerson said during a visit to Ethiopia that the U.S. has seen "potentially positive signals" from North Korea but “we’re a long ways from negotiations.”

China, which is North Korea’s main economic lifeline but has tightened the noose in line with Trump’s demands, said direct dialogue was a step in the right direction to maintaining stability in the region.

“We hope that all parties will demonstrate political courage … and do their best to restart dialogue and negotiation for the peaceful settlement of the peninsula nuclear issue,” Foreign Ministry spokesman Geng Shuang said, according to the official Xinhua news agency. “China will continue to make unremitting efforts toward this outcome.”

Analysts said the planned talks could pave the way for a peaceful resolution of the crisis over North Korea’s nuclear ambitions, but many were skeptical that the regime is willing to abandon its weapons program.

“What we’re seeing is that Kim Jong Un is trying to maneuver things so he ends up with a freeze,” said Robert Manning, a senior fellow at the Scowcroft Center for Strategy and Security in Washington.

Manning, a former State Department official, said Trump shouldn’t have responded to the invitation for talks so quickly. “It puts Kim Jong Un in the driver’s seat,” he said.

North Korea has made rapid progress toward its goal of developing a nuclear weapon that could target the U.S. mainland. It test-fired numerous missiles and conducted its sixth and most powerful underground nuclear test last year.

Its last missile test was on Nov. 29, when it launched its most powerful intercontinental ballistic missile into the sea and declared it had achieved its long-sought goal of becoming a nuclear power.

Trump and Kim also traded threats and personal insults, with the U.S. president warning he would “totally destroy North Korea if forced to defend the United States and its allies. He also called the North Korean leader “little rocket man,” while Kim called him a “dotard.”

But the two sides have toned down their rhetoric since the North agreed to join the Olympics and Paralympics, prompting a flurry of sports diplomacy.

Moon, who vowed never to allow another Korean War on the peninsula, has pressed hard to extend the détente into broader talks with the U.S. while insisting that the North must ultimately agree to get rid of its nuclear weapons.

“The Korean government will cherish this miraculous opportunity and make progress in a sincere, careful and steady manner,” he said in a statement provided by his office.

The 34-year-old leader has not met any other head of state since taking power after his father died of a heart attack in 2011. His talk with Chung on Monday was the first time he has met with South Korean officials.

A meeting with a U.S. president would in itself be an accomplishment for North Korea, which has wanted a seat at the table since the current leader’s father was at the helm.

“North Korea has been seeking a summit with an American president for more than twenty years,” Jeffrey Lewis of the Middlebury Institute of International studies in Monterey, Calif., tweeted. “It has literally been a top foreign policy goal of Pyongyang since Kim Jong Il invited Bill Clinton.”

Clinton didn’t go during his presidency but sent then-Secretary of State Madeleine Albright in 2000. The subsequent agreed framework deal collapsed along with six-party talks.

Experts have differed over whether the North Korean leader is responding to punishing economic sanctions that are beginning to bite or if he sees this as an opportunity to negotiate with the U.S. as a nuclear power, a long-held goal.

“Kim Jong Un did declare the completion of his state nuclear force so he may feel like he has enough now to feel confident … to feel like a nuclear power and that he has parity,” said Jenny Town, assistant director of the U.S.-Korea Institute at the Johns Hopkins School of Advanced International Studies.

She also noted the Trump administration also is suffering from a dearth of expertise but said direct talks between the leaders could allow for faster decision-making.

The president has not nominated a new U.S. ambassador to South Korea and the chief U.S. envoy for North Korea, Joseph Yun, recently resigned.

“It is an enormous opportunity,” Town said. “But there’s a lot that could go wrong.”

The North Koreans also have shown concern about Trump’s threats and leadership style. North Korean officials have reached out to analysts in Washington and even read “Fire and Fury,” a book that contained explosives revelations about the Trump administration.

“We urge both North Korea and the United States to join the majority of countries in pursuing permanent denuclearization through the Treaty on the Prohibition of Nuclear Weapons,” it said in a statement.