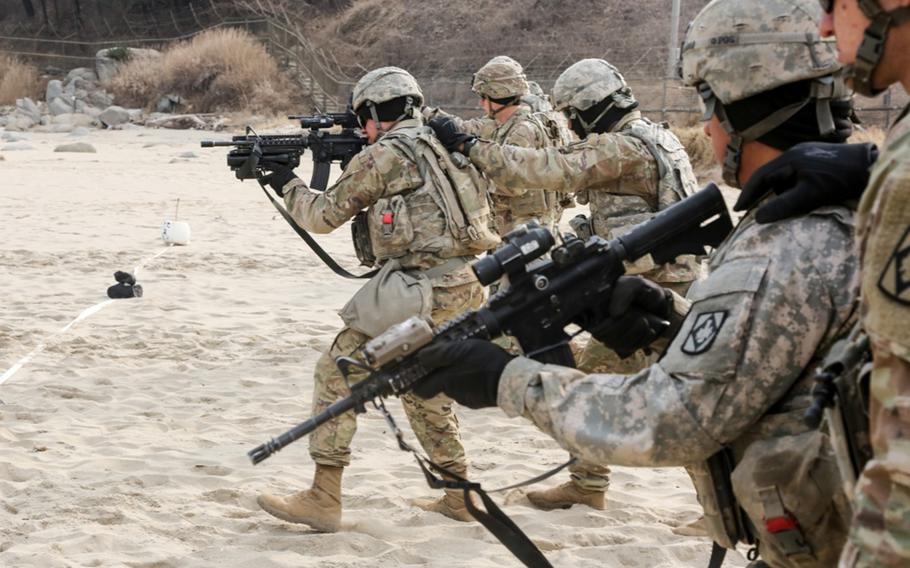 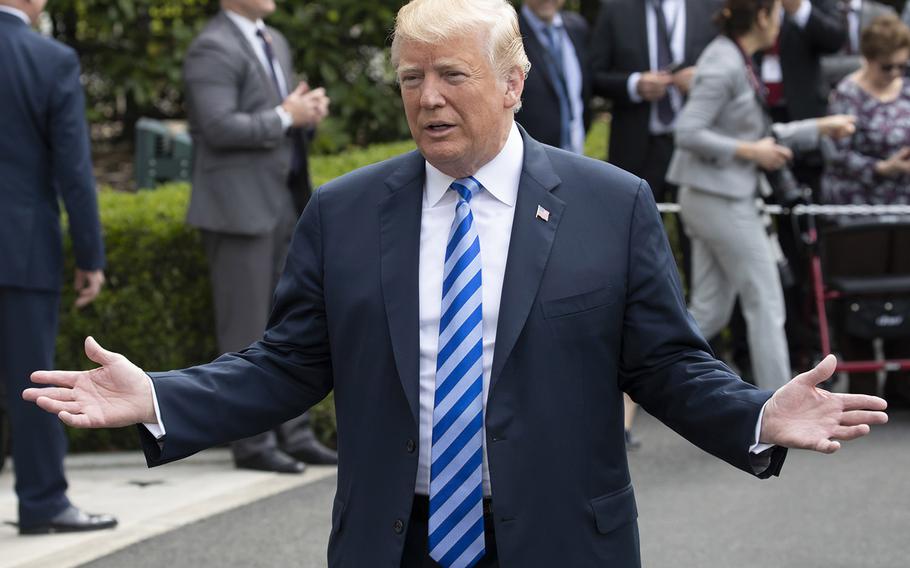 President Donald Trump talks to the media as he leaves for Dallas to address the National Rifle Association, Friday, May 4, 2018 at the White House. (J. Scott Applewhite/AP)

President Donald Trump said Friday that he will not consider withdrawing the 28,500 American troops stationed in South Korea as he prepares to negotiate the removal of North Korea’s nuclear weapons with its leader Kim Jong Un in the coming weeks.

“Troops are not on the table,” Trump said at Andrews Air Force Base just before boarding a flight to Dallas, Texas. The president denied a New York Times report that he had ordered the Pentagon to draw up options for removing U.S. forces from South Korea.

Officials with the Pentagon and the National Security Council also denied the report.

The U.S. military presence in South Korea has been the cornerstone of the alliance between the two countries since the 1950-53 Korean War ended in an armistice instead of a peace treaty.

But the rapidly evolving peace process with the North has led to suggestions that U.S. troops might not be needed if a treaty is signed. Trump said Friday that the White House and Pyongyang had settled on a date and location for the historic summit, but he did not reveal those details. The meeting has been expected to take place late this month or in early June.

Trump has frequently raised the possibility of removing troops from South Korea on the campaign trail and since taking office.

The president did not rule out the eventual removal of some troops from the peninsula in his brief comments Friday, telling reporters he’d "like to save the money" that it costs to house servicemembers there.

The New York Times on Thursday cited several people familiar with the deliberations as saying the president was seeking options ahead of his planned summit with the North Korean leader.

The officials declined to say whether Trump was seeking options for a full or partial reduction but stressed that rethinking the size and configuration of the force was overdue.

They also said the request was not intended to be a bargaining chip in upcoming nuclear talks with the North, which has long demanded the withdrawal of America’s military from the South.

Marine Lt. Col. Christopher Logan, a spokesman for the Pentagon, called the New York Times report inaccurate, adding American force posture and mission has not changed in South Korea and the Defense Department has no plans to adjust them.

“The president has not asked the Pentagon to provide options for reducing American forces stationed in South Korea," Logan said. “The Department of Defense remains committed to supporting the maximum pressure campaign, developing and maintaining military options for the president, and reinforcing our ironclad security commitment with our allies.”

“The president has not asked the Pentagon to provide options for reducing American forces stationed in South Korea,” he told reporters in Washington.

South Korea’s presidential office said Friday that a U.S. National Security Council official had told a senior South Korean official that the report was “not true at all.” The NSC official gave the reassurance to South Korea’s visiting top security adviser, Chung Eui-yong, who is in Washington for talks on the upcoming U.S.-North Korean summit, according to a statement from the Blue House. South Korean President Moon Jae-in and Kim agreed in a summit last week to work toward a peace treaty by the end of the year and to seek the “complete denuclearization” of the peninsula.

Moon insisted Wednesday that U.S. forces would not be part of the deal.

“U.S. Forces Korea is a matter regarding the U.S.-South Korean alliance. It has nothing to do with signing peace treaties,” spokesman Kim Eui-kyeom quoted Moon as saying.

Trump has argued that South Korea should shoulder more of the burden for its own defense and having U.S. troops on the peninsula has not stopped the North from developing nuclear weapons. Under the current agreement, South Korea pays about $900 million, or half of the cost for maintaining U.S. forces. It also funded nearly the entire $10.7 billion in construction costs for the expansion of Camp Humphreys as part of the long-delayed relocation of the military headquarters from Seoul. White House Chief of Staff John Kelly, a retired Marine general, talked the president out of ordering a total withdrawal from the peninsula in a “heated exchange” before the Feb. 9-25 Winter Olympics began in South Korea, NBC News reported earlier this week, citing two anonymous officials. The U.S. and South Korean militaries insist their alliance is stronger than ever, but Defense Secretary Jim Mattis suggested last week that troop presence could be on the table in talks with the North. “That’s part of the issues that we’ll be discussing in the negotiations with our allies first and, of course, with North Korea,” Mattis told reporters when asked if U.S. troops would be needed on the peninsula if a peace treaty is reached. “So I think for right now, we just have to go along with the process, have the negotiations and not try to make preconditions or presumptions about how it’s going to go,” he added. “The diplomats are going to have to go to work now.” U.S. and South Korean officials have said that although it’s a long-term goal, Kim doesn’t plan to demand a troop withdrawal as part of negotiations over demands that he give up his nuclear weapons.

Instead, the North Korean leader is expected to focus on easing international economic sanctions aimed at punishing the communist state for its efforts.

Former President Jimmy Carter tried to remove the troops after he took office in 1977 in a bid to trim the defense budget and pressure South Korea’s then-dictatorship over human rights, but he backed down after hitting a wall of opposition from his top aides. Past U.S. administrations had more success in trimming the force. Richard Nixon withdrew about a third of 60,000 servicemembers in 1971 despite strong opposition from the South.

George W. Bush shifted many of the troops to Iraq in the years after the United States invaded that nation in 2003. His father, George H. W. Bush removed tactical nuclear weapons from South Korea in the early 1990s.