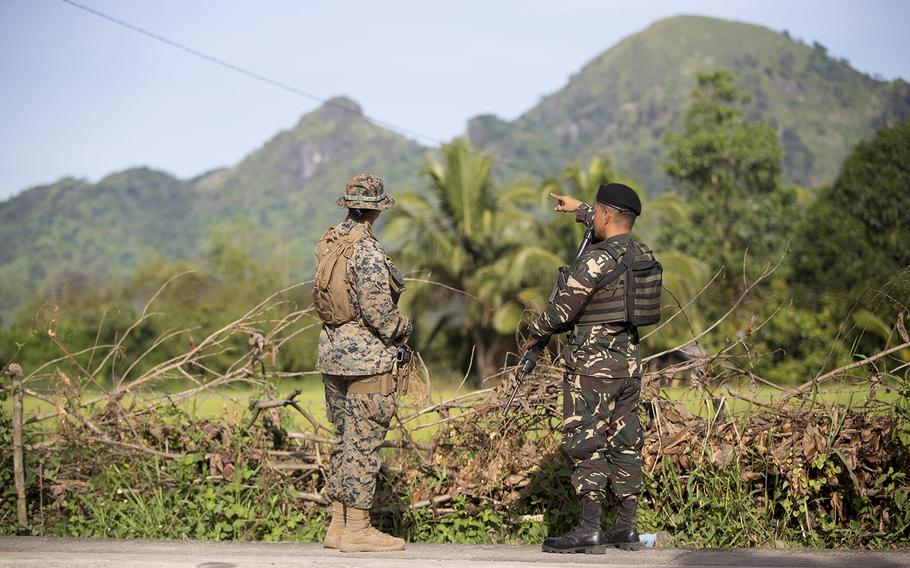 President Donald Trump is “fine” with the Philippines’ intent to terminate a security pact that allows U.S. troops to visit and train there, he said Wednesday.

“That’s fine — we’ll save a lot of money,” Trump said in the Oval Office in response to a reporter’s question. “I have a very good relationship there, but I really don’t mind if they would like to do that.”

Philippines Foreign Secretary Teodoro Locsin Jr. announced Tuesday that a notice of termination of the Visiting Forces Agreement had been submitted to the U.S. Embassy in Manila that day. The pact, which has been in place since 1999, is scheduled to end 180 days after that notification.

Philippines President Rodrigo Duterte, a critic of the United States long before he was elected in 2016, had ordered the agreement terminated.

Military cooperation with the Philippines is seen by the Defense Department as a key component in pushing back on China’s broad but disputed claims to sovereignty over most of the South China Sea.

In his Oval Room comments, Trump did imply that the move displayed ingratitude by the Philippines for U.S. military assistance in helping put down a jihadist uprising in the southern part of the country in 2017.

Trump said “we came in and literally single-handedly were able to save them from vicious attacks on their islands.”

The U.S. provided Philippine forces with assistance and training in the areas of intelligence, surveillance and reconnaissance through a rotating group of special operations troops that did not number more than 100 at any given time, according to a Pentagon statement at the time. American troops were not involved in direct combat.

Trump’s remarks ran counter to Secretary of Defense Mark Esper’s comments to reporters Tuesday that the move sent the wrong message to China.

“As we try and bolster our presence and compete with [China] in this era of great power competition, I think it’s a move in the wrong direction for the longstanding relationship we’ve had with the Philippines for their strategic location, the ties between our peoples, our countries,” Esper said.

Duterte spokesman Salvador Panelo said Wednesday the termination should have come “a long time ago” because it was advantageous only to the U.S., according to a state-run newswire.

He said Esper’s reaction was expected, “given that the VFA favors the U.S. and its abrogation affects its global strategic defensive positioning.”

Panelo told reporters Tuesday that Manila is expecting “preferential attention” from the U.S. following the revocation of the security pact.

The Visiting Forces Agreement was approved by lawmakers and needs their concurrence if it’s to be set aside, the broadcaster quoted Sotto as saying. Sotto told a Philippine radio station that a petition to review Duterte’s unilateral decision may be filed as early as next week.

Early in his term, Duterte signaled he would not implement the 2014 Enhanced Defense Cooperation Agreement with the U.S., which was signed by the former administration. The agreement gave America greater access to rotate troops and store supplies in a handful of military bases throughout the country.

But Duterte was confronted by “resistance within his own military and defense bureaucracy” and appears to have waited for “a more opportune moment” to alter the military status quo, said Renato Cruz De Castro, a professor in the International Studies Department at De La Salle University, Manila, in a commentary posted online Tuesday by the Center for Strategic and International Studies, a Washington, D.C.-based think tank.

Now, two years before the end of his term, Duterte “believes that the [Armed Forces of the Philippines] will now support his move since he has increased the defense budget, funded the military’s modernization program, and promoted senior officers who will be loyal to him,” Cruz De Castro said.