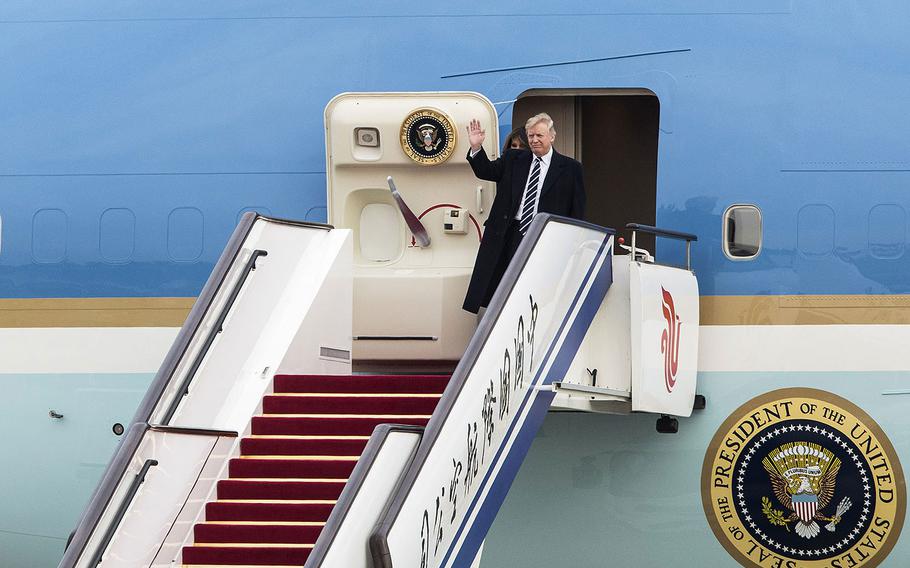 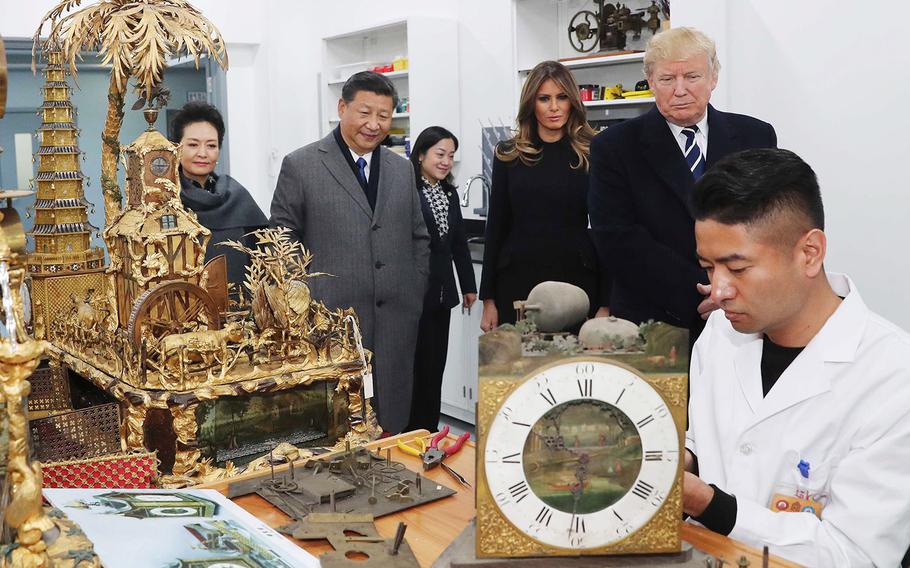 SEOUL, South Korea – President Donald Trump warned North Korea not to underestimate the United States while signaling a willingness to negotiate Wednesday as he wrapped up a visit to the South that put him on the communist state’s doorstep.

Trump also had a blunt message for China, which was the next and third stop on his first official Asia tour: stop supporting the North.

Tensions have spiked as North Korea test-fired two intercontinental missiles in July and conducted its sixth and most powerful nuclear test on Sept. 3, although it hasn’t carried out a serious provocation in nearly two months.

The White House said later Wednesday that Trump will decide whether to re-designate North Korea as a “state sponsor of terrorism” – which would mean more unilateral sanctions - at the end of his 12-day trip. Former President George W. Bush lifted the designation in 2008.

Trump made his remarks in a speech to South Korea’s National Assembly after returning from a failed effort to fly to the Demilitarized Zone that divides the peninsula. His helicopter had to turn back to Seoul because of poor visibility even as South Korean President Moon Jae-in was waiting for him at the frontier.

Trump reiterated that the U.S. military has three aircraft carriers that are “loaded to the maximum” in the vicinity of the Korean Peninsula as well as nuclear submarines that he said were “appropriately positioned.”

Trump began by outlining in great detail the successes that prosperous South Korea has achieved since the end of the 1950-53 war that pitted it against its communist neighbor to the north. He had only harsh words for Kim Jong Un’s regime, calling it a “hell no person deserves.”

The president also criticized past U.S. policy toward the North, which has shown rapid progress in its nuclear weapons program over the past year and a half. He vowed to defend the U.S. homeland as well as its allies.

“The regime has interpreted America’s past restraint as weakness. This would be a fatal miscalculation,” he said. “Today I hope I speak not only for our country but for all civilized nations when I say to the North do not underestimate us and do not try us.”

“America does not seek conflict … but we will never run from it. History is filled with discarded regimes that have foolishly tested America’s resolve,” he added.

But Trump also appeared to extend an opening to resume long-stalled negotiations, saying “we will offer a path to a much better future” if the regime stops its aggression and missile tests and agrees to “complete, verifiable and total denuclearization.”

North Korea has insisted its nuclear weapons program is not up for negotiation, but experts have suggested there may be room for a freeze in order to allow talks to begin.

The speech, which was the first to the parliamentary body by a U.S. president in nearly a quarter century, and Trump’s overall visit was stern but lacked the bellicose tone that he has frequently used in recent months.

He has called Kim Jong Un “Little Rocket Man” and threatened to unleash “fire and fury” and to “totally destroy” North Korea if forced to defend the U.S. and its allies.

North Korea, meanwhile, has raised the stakes with a series of missile tests, most recently one that soared over the Japanese island of Hokkaido on Sept. 15. Its official newspaper, Rodong Sinmun, denounced Trump’s visit. “Trump has flown to South Korea in order to light the fuse of a nuclear war while strengthening military threats against us,” it said in a commentary.

The U.S., which fought with the South in the war against the communist-backed North, maintains about 28,500 servicemembers on the divided peninsula. Duyeon Kim, a visiting senior fellow at the Seoul-based Korean Peninsula Future Forum, praised Trump’s speech, saying it showed the strength of the alliance and stayed on script.

“Trump also put the ball in [North Korea’s] court and teed up” the Beijing visit, she wrote on Twitter.

Trump flew next to Beijing, where he is expected to step up pressure on President Xi Jinping to do more to rein in the defiant North. He began his tour Sunday in Japan and will also travel to Vietnam and the Philippines.

He urged “responsible nations,” including China and Russia, to cut off support to the North as part of a global effort to isolate the regime.

“We call on every nation, including China and Russia, to fully implement sanctions, downgrade diplomatic relations and sever all ties of trade and technology,” he said. “The longer we wait the greater the danger grows and the fewer the options become.”