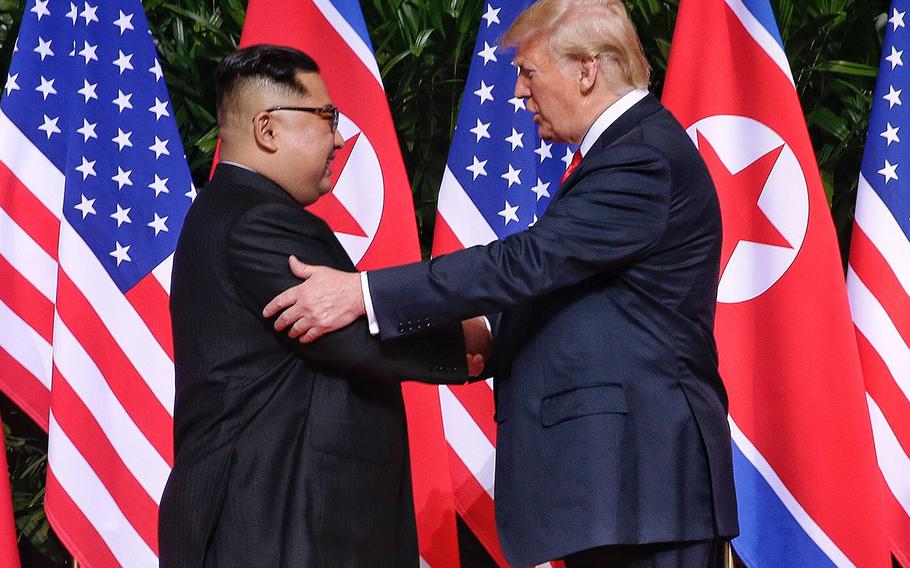 SEOUL, South Korea — The U.S. administration has lowered expectations for fast progress in nuclear talks with North Korea as no breakthrough on a deal has been reached more than five weeks after the historic summit between President Donald Trump and Kim Jong Un.

Secretary of State Mike Pompeo said the sides have made progress on some issues, including the promised return of remains of American troops killed in the 1950-53 war, which he said was expected to happen “in the next couple of weeks.”

Meanwhile, he stressed that sanctions aimed at punishing the North for its nuclear weapons program will remain in place.

“There’s a lot of work to do,” he said Wednesday during a Cabinet meeting chaired by Trump. “It may take some time to get where we need to go, but all of this will be taking place against the backdrop of continued enforcement of the existing sanctions.”

Pompeo, who earlier this month traveled to Pyongyang for the third time since April, said the North Koreans had reaffirmed their commitment to denuclearize.

“We’re making progress along the border to get the return of remains, a very important issue for those families,” he added. “We think in the next couple of weeks we’ll have the first remains returned. That’s the commitment.”

Kim’s agreement to resume the long-stalled search for the remains of thousands of Americans believed lost in the North, “including the immediate repatriation of those already identified,” was one of the four points in the final summit declaration along with a general promise to work toward the “complete denuclearization” of the divided peninsula.

A U.S. official told Stars and Stripes that the North may return as many as 55 sets of remains on July 27, which is the 65th anniversary of the signing of the armistice that ended the war, although that date may change as more talks were needed to finalize the details.

Pompeo’s remarks followed the tone set by Trump earlier this week, when the president said “we have no time limit” since the North hasn’t test-fired a missile in nearly eight months. He also said Russia has agreed to help with the North but did not say how.

“There is no rush, the sanctions remain! Big benefits and exciting future for North Korea at end of process!” Trump added in a tweet on Wednesday.

The president has maintained optimism despite criticism that the North has not agreed to any specific measures, timelines or even a definition of denuclearization.

He frequently points out that the diplomatic outreach has tamped down tensions that spiked last year as the two countries traded threats and the North demonstrated rapid progress in the development of an intercontinental ballistic missile and conducted its sixth and most powerful nuclear test.

The acknowledgment that it will take more time contrasts sharply with remarks made immediately after the unprecedented summit in Singapore on June 12, when Trump said the denuclearization process would be started “very quickly” and declared that the North no longer poses a nuclear threat.

National Security Adviser John Bolton said more recently that Washington has a plan that would lead to the dismantling of the North’s nuclear and missile programs in a year.

Experts, however, have cautioned that the process will take time. A team of Stanford University researchers, including nuclear physicist Siegfried Hecker, proposed a 10-year roadmap for the task.

“Both the US and North Korea are still sending mixed messages as to whether and how they will approach denuclearization, fueling skepticism about North Korea’s willingness to give up its nuclear weapons and hinting at the US’s lack of a coherent strategy in dealing with the regime,” academics Gi-Wook Shin and Joyce Lee said in a commentary posted on the 38 North website.

“Any goal of rapid denuclearization will be proven as unrealistic as it is aggressive,” they added.