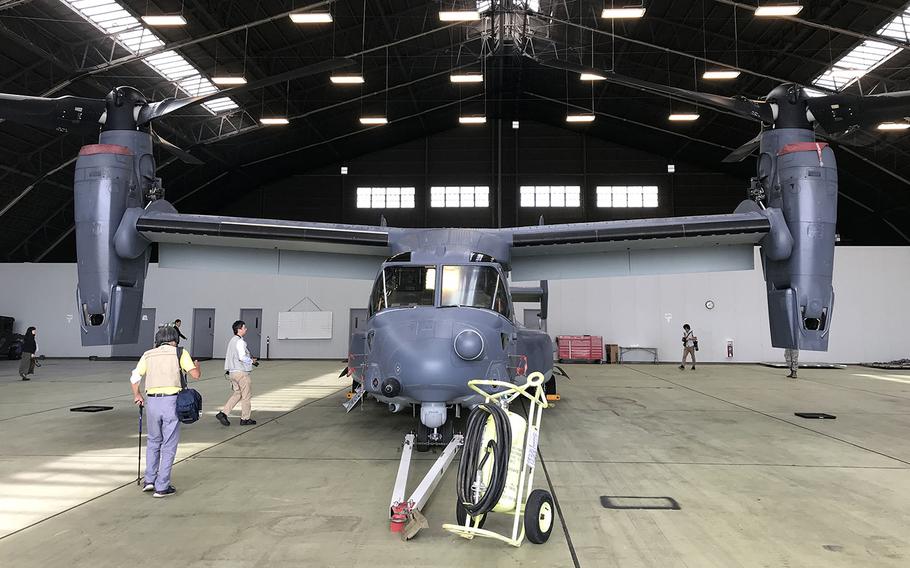 YOKOTA AIR BASE, Japan – CV-22 Osprey operations won’t be impacted by the diversion of nearly $87 million from projects supporting tiltrotor aircraft in western Tokyo, according to U.S. military officials.

Six construction projects planned for Yokota — home of U.S. Forces Japan and 5th Air Force — are included in a Defense Department list of $3.6 billion in projects being defunded to pay for a wall along the U.S.-Mexico border.

Defunded Yokota projects listed by the Pentagon include a C-130J Super Hercules corrosion control hangar and other hangars, operations, warehouse and maintenance facilities.

“The [hangar] and warehouse facility are parts of a planned Air Force Special Operations Command CV-22 Campus,” Anthony Mayne, a spokesman for the U.S. Army Corps of Engineers’ Japan District, said in a Sept. 6 email.

Defunded Yokota projects associated with the Ospreys were worth just under $87 million, he said in a follow-up email Tuesday.

However, Master Sgt. William Coleman, a spokesman for the 374th Airlift Wing, in a Sept. 5, email said defunding the Yokota projects “will not change any plans previously made by the [21st Special Operations Squadron] and the [753rd Special Operations Maintenance Squadron].”

The squadrons, which stood up in July, are charged with flying and maintaining five CV-22 Ospreys out of Yokota.

Lt. Col. Jason Hock, commander of the 21st, told reporters July 1 that a plan was on track to eventually station 10 Ospreys, supported by 450 personnel, at the base. The units are working out of temporary facilities at Yokota and will stay in them until purpose-built ones have been constructed, he said.

Contracts for the construction of parts of the special operations campus have already been awarded and work will begin within the next year, Mayne said.

“This future construction includes a transmitter facility, roads, apron and utilities,” he said.

Other defunded projects at Yokota, unrelated to the Ospreys, include the corrosion control hangar and a combat arms training maintenance facility. These are older projects that have been delayed for nine months and 12 months respectively, Mayne said.

When or if those projects might proceed is “still to be determined at the DOD level,” he said.