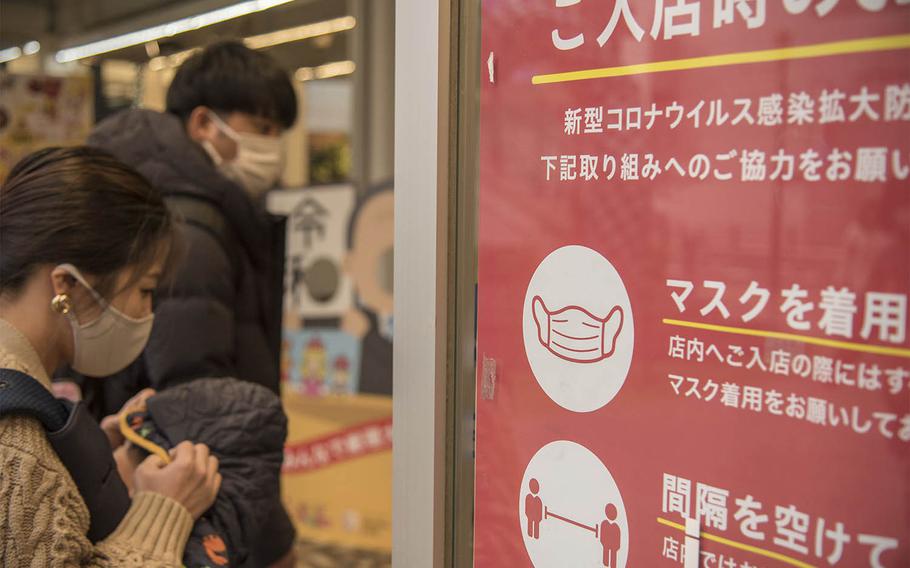 The Tokyo Metropolitan Government reported 533 new patients, the second day of 500 or more cases, according to metro government data and public broadcaster NHK. The city of 13.5 million people has so far reported 42,344 cases and about 500 deaths during the pandemic.

The U.S. military in Japan reported three new coronavirus patients: one late Wednesday at Kadena Air Base, Okinawa, and one each Thursday at Marine Corps Air Station Iwakuni and by the Army.

MCAS Iwakuni, 500 miles west of Tokyo, announced that a recent arrival to the air station had tested positive and was immediately quarantined.

“The likelihood of further spread of the virus remains low due to strict adherence to restriction of movement procedures,” said a base news release Thursday.

On Wednesday evening, Kadena reported that a delivery driver for the base Pizza Hut restaurant tested positive last weekend. The driver is the second Pizza Hut employee at Kadena infected since October.

The driver tested positive three days after experiencing symptoms of COVID-19, the respiratory disease caused by the coronavirus, and five days after last working, according to a base Facebook post.

Public health officials found no close contacts, according to the post. The base, which cited the Pacific Region commander of the Army and Air Force Exchange Service, said food delivery people “adhere to the latest AAFES COVID-19 mitigation procedures,” which include wearing a mask and gloves while making deliveries, sanitizing vehicles and delivery bags and maintaining their distance at the customers’ doors while delivering the orders.

Those patients include a soldier at Camp Casey, an Army post north of Seoul, who tested positive Thursday and quarantined at Camp Humphreys.

Three of those service members had arrived from the United States at Osan Air Base via government-chartered Patriot Express flights on Nov. 17, Sunday and Monday.

The other three service members and two dependents arrived at Incheon International Airport via commercial flights on Sunday and Monday.

Six individuals tested positive on the first mandatory test; two tested positive in a second test. All are quarantined at either Camp Humphreys or Osan, according to the release.