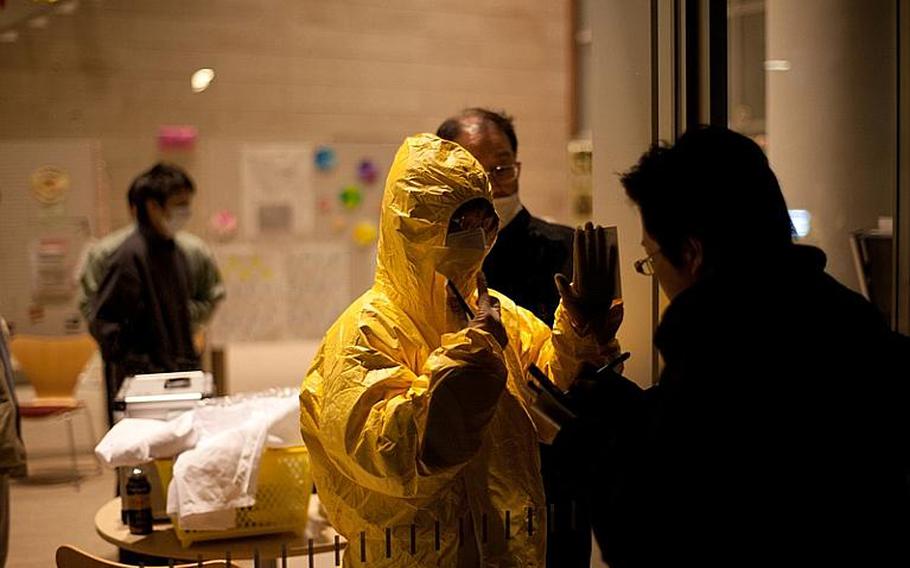 People evacuated from their homes near the nuclear power plant in Fukushima, Japan, soon after the March 2011 earthquake and tsunami are quarantined at a local community center awaiting radiation testing. (Nathan A. Bailey/Stars and Stripes)

YOKOTA AIR BASE, Japan — The Japanese government has confirmed the first cancer case related to the meltdown of the Fukushima Dai-ichi nuclear power plant after a devastating earthquake and tsunami struck northeastern Japan in 2011, broadcaster NHK reported Tuesday.

The worker, who was involved in recovery and cleanup efforts at the plant, was diagnosed with leukemia, and Japan’s Ministry of Health, Labor and Welfare has approved workers’ compensation for him, the report said.

Nuclear power remains a controversial topic in Japan. Fifty-nine percent of Japanese residents oppose restarting nuclear reactors that were shut down after the meltdown, and 77 percent said they would support a plan to phase out nuclear energy, according to an Asahi Shimbun poll conducted last year. Kyushu Electric Power restarted a reactor at its Sendai nuclear power plant in August, and a reactor in Kagoshima Prefecture resumed operation last week.