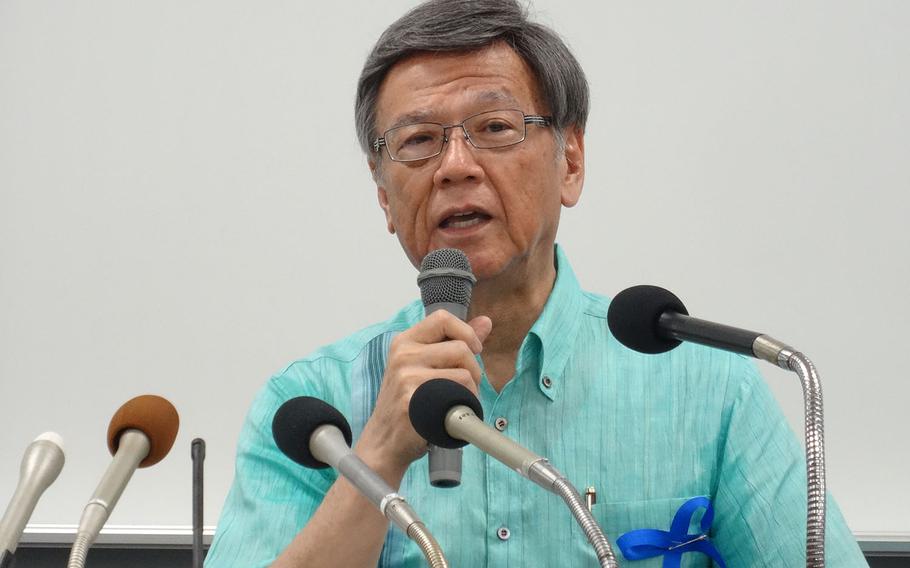 Okinawa Gov. Takeshi Onaga tells reporters after a rally against a new runway at Camp Schwab that he will convey the island's opposition to the project during his planned visit to the United States next month, Sunday, May 17, 2015. (Chiyomi Sumida/Stars and Stripes )

Okinawa Gov. Takeshi Onaga tells reporters after a rally against a new runway at Camp Schwab that he will convey the island's opposition to the project during his planned visit to the United States next month, Sunday, May 17, 2015. (Chiyomi Sumida/Stars and Stripes ) 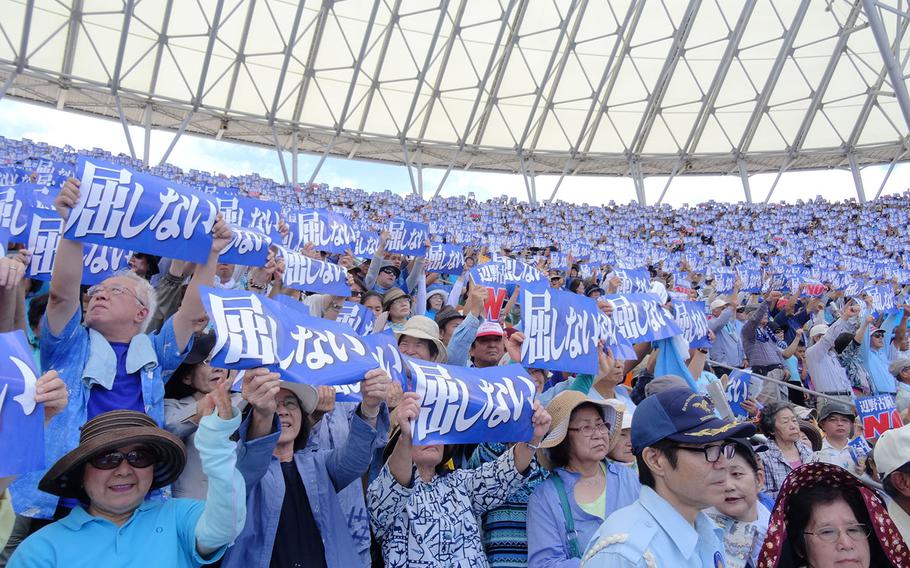 Protesters against a new runway at Camp Schwab in Okinawa, Japan, hold a sign that says "We will never give up," Sunday, May 17, 2015. Some 35,000 people gathered for the rally at a baseball stadium in Naha, Japan. (Chiyomi Sumida/Stars and Stripes ) 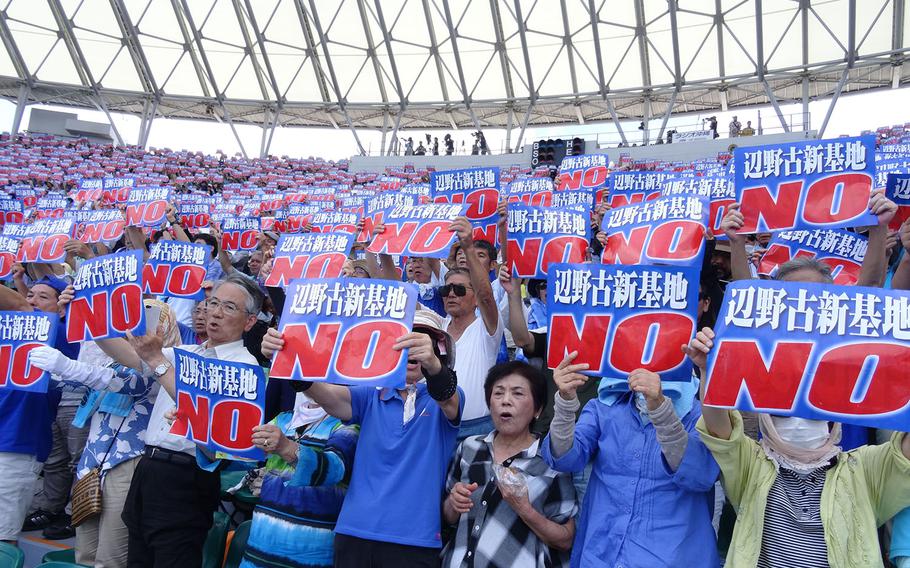 Protesters hold signs that read "No to a new military base at Henoko" during a protest rally Sunday, May 17, 2015, at the Okinawa Cellular Stadium in Japan. According to organizers, about 35,000 people from throughout the country gathered for the event. ( Chiyomi Sumida/Stars and Stripes ) 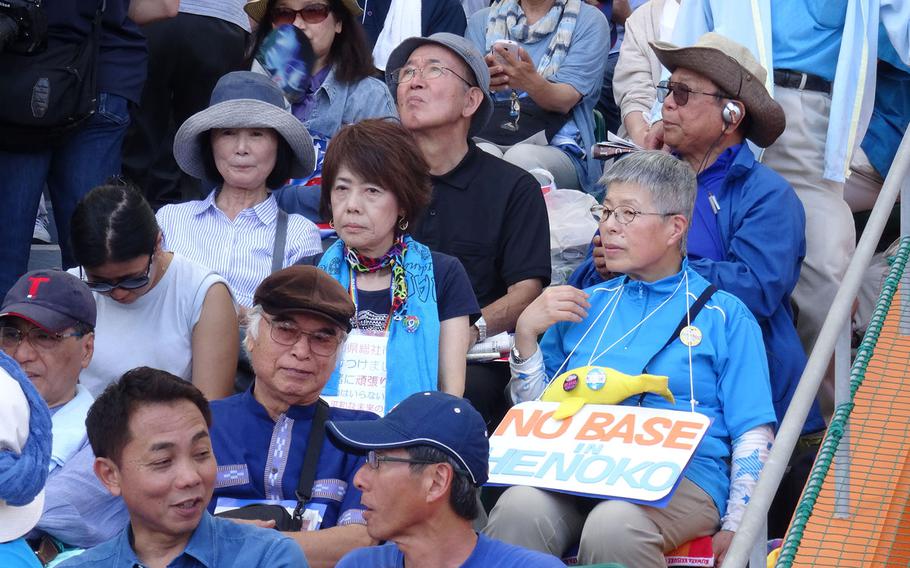 Protesters and their supporters gather Sunday at Okinawa, Japan's largest baseball stadium to voice their opposition to a new military runway that requires landfill work at Oura Bay, adjacent to U.S. Marine Corps Camp Schwab, Sunday, May 17, 2015. Environmentalists claim that the landfill work disrupts feeding patterns of dugongs, an endangered marine mammal, which reportedly have been seen near the bay. (Chiyomi Sumida/Stars and Stripes ) 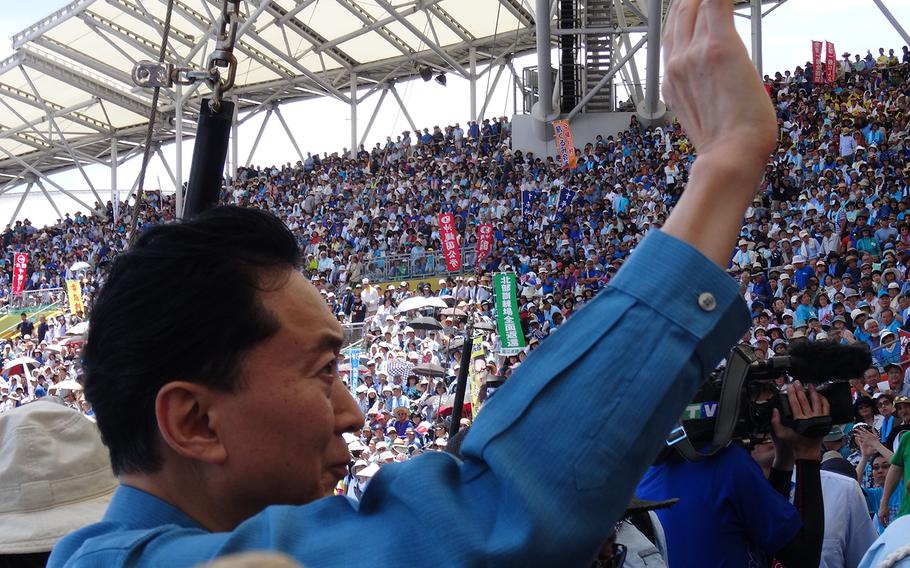 Yukio Hatoyama, a former Japanese prime minister, received a warm welcome from protesters during a rally against a new runway at Camp Schwab in Okinawa, Sunday, May 17, 2015. When he took office in 2009, he promised to move Futenma air station off Okinawa, but he stepped down less than a year later, admitting that Japan could not break a 2006 agreement with the United States to move the facility to Camp Schwab. (Chiyomi Sumida/Stars and Stripes )

Organizers estimated that some 35,000 people packed Naha’s biggest baseball stadium for the event, where Gov. Takeshi Onaga and others expressed firm opposition to construction of the new runway at Oura Bay in Nago’s Henoko district. It would replace air operations currently conducted at Futenma air station.

“I renewed my resolve today never to allow construction of a new military base at Henoko,” Onaga said.

Camp Schwab is situated in a sparsely populated area in the northern part of Okinawa, while Futenma air station is in the heart of densely populated Ginowan city in the island’s center. The 1,200-acre air station occupies about one-quarter of the city’s land surface.

Building the replacement runway on reclaimed land at Camp Schwab has met strong resistance from many residents, who demand a smaller military presence in their island prefecture. Protest activities have intensified since the election in November of Onaga, who vowed to block the runway.

“How long is the Japanese government going to keep forcing the excessive burden (of hosting military bases) on Okinawa?” he said.

The rally in Okinawa’s capital was organized by politicians, businesspeople, labor unions and academics. Chokei Taira, the head of a hotel chain and one of the organizers, said that the people of Okinawa would never allow construction of another military facility on the island.

“The source of our resistance is the pride and confidence in our identity as Okinawans,” he told the audience.

Among those gathered at the stadium were many elderly people who had experienced the Battle of Okinawa, the ferocious 1945 Allied campaign to take the island.

Kotoku Arime, 80, was at the rally with his 76-year-old wife and their daughter and grandson. Arime said he had grown up “when militarism had swept the nation.”

“I feel and smell the same air in these days that I had then,” he said of recent efforts by the Abe government to reinterpret Japan’s use of collective self-defense and other security-related legislation before the national Diet.

“It’s because of that sense of crisis that I decided to come here today. We must stop construction of Henoko base,” he said.

Businessman Morimasa Goya announced that the Henoko Foundation, set up last month to stop the runway construction, had so far raised 210 million yen( about $1.8 million) - 70 percent of it from mainland Japan. The foundation’s efforts will include lobbying activities in the United States, he said.

“Our Okinawa-wide effort has now changed to a Japan-wide movement. We are never alone,” he said.

After the rally, Onaga, who plans to visit Washington next month to lobby against the runway, told reporters he was encouraged by the turnout.

“When I visit the United States, I will deliver the voice of people of Okinawa and Japan and make an appeal that construction of a new military base at Henoko is impossible.”