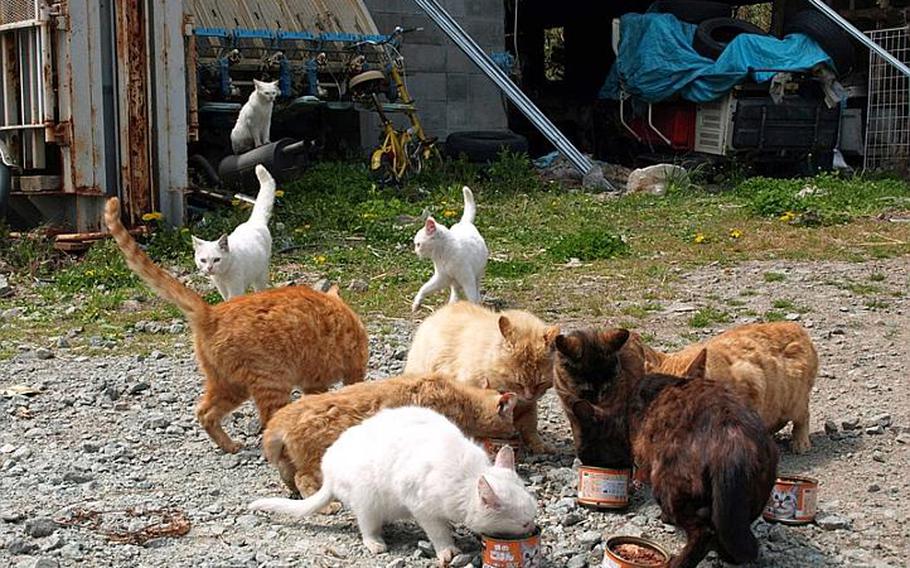 Thousands of dogs and cats were left to fend for themselves after their owners were forced to evacuate from the area around the damaged Fukushima Dai-ichi nuclear plant. Most disaster shelters ban pets. (Courtesy of Dogs and Cats Orphan Support)

Thousands of dogs and cats were left to fend for themselves after their owners were forced to evacuate from the area around the damaged Fukushima Dai-ichi nuclear plant. Most disaster shelters ban pets. (Courtesy of Dogs and Cats Orphan Support) 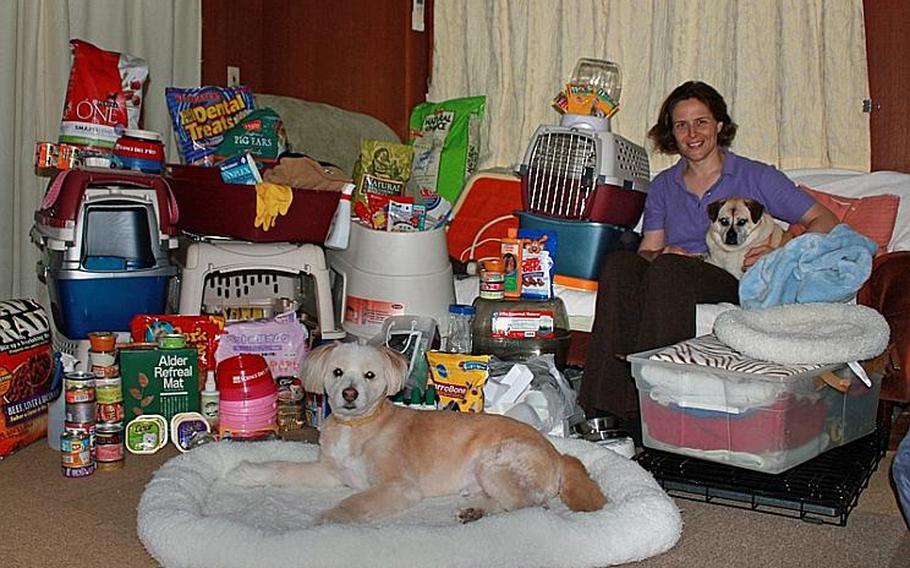 Kate O'Callaghan, an Irish English teacher at the University of the Ryukyus, plans her third trip next month to Fukushima to join in animal rescue volunteer activities. The majority of the supplies that occupy a large space in her apartment were donated by Americans on the island. (Courtesy of Kate O'Callaghan) 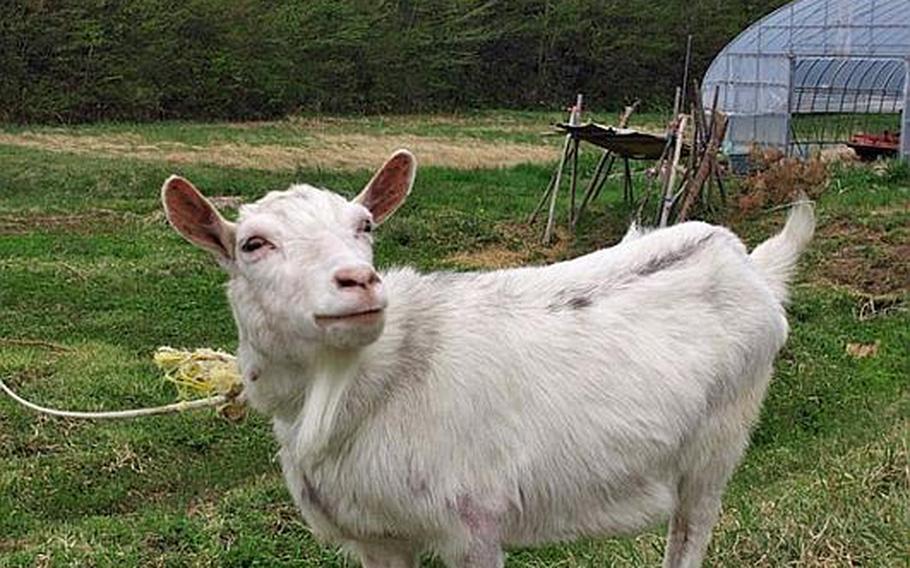 When residents evacuated from their homes after the March 11 disaster, many left their pets behind because most disaster shelters ban pets. Various volunteer groups are now working to save the abandoned animals. (Courtesy of Akiko Okano) 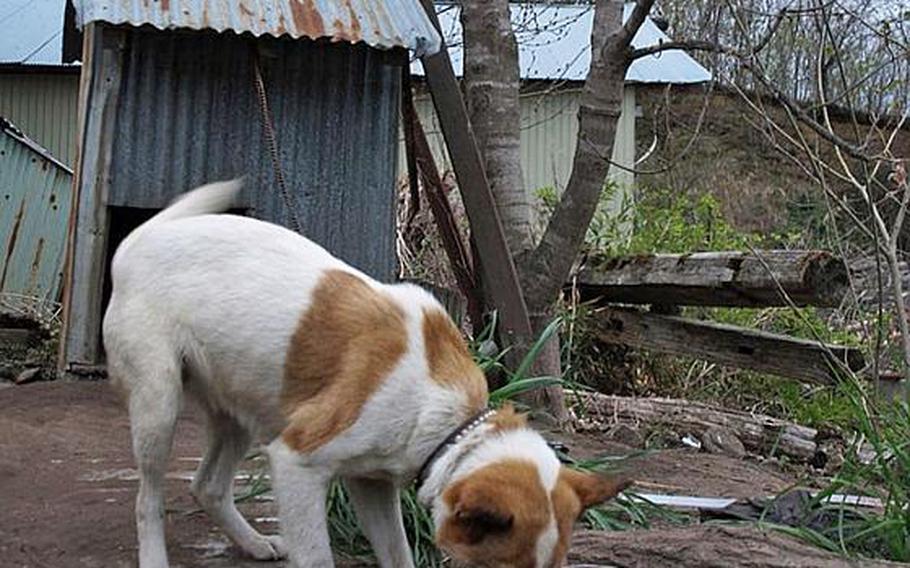 This dog survived the disaster, but many died from starvation after their owners were forced to evacuate. (Courtesy of Dogs and Cats Orphan Support) 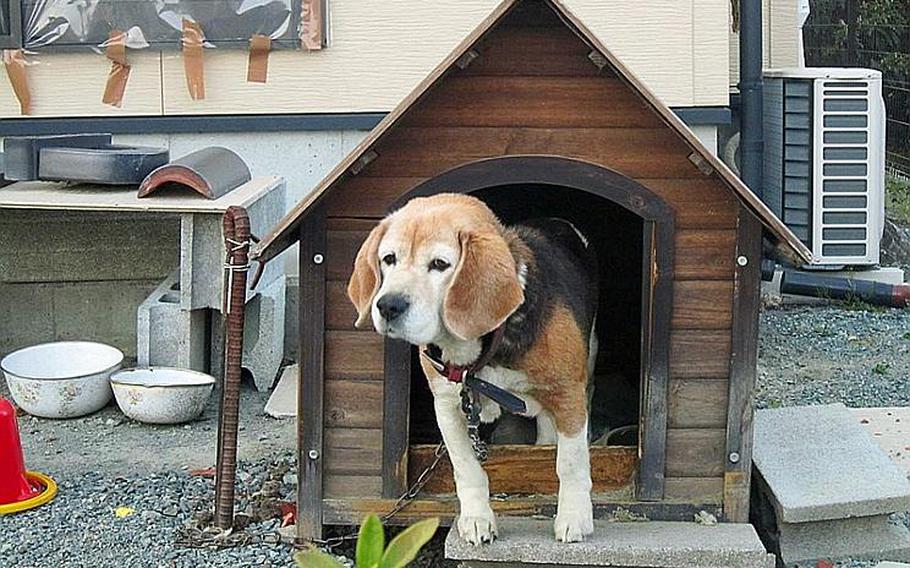 After the March 11 disaster, many dogs, like this one, remained tied to their kennels, waiting for food and reunions with their owners. Various volunteer groups from Japan and abroad worked around the clock in disaster-affected areas to save the pets. (Courtesy of Dogs and Cats Orphans Support) 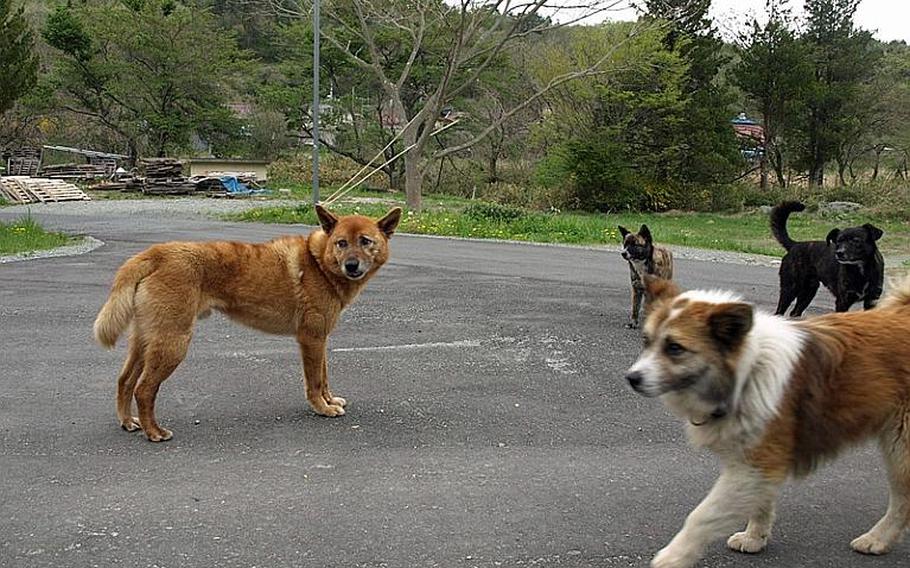 More than two months after the March 11 disaster, about 3,000 dogs and cats are estimated to have been left behind within the restricted zone of the battered nuclear plant in Fukushima. Feeding them and finding new homes for the displaced animals are urgent. -30- (Courtesy of Dogs and Cats Orphans Support) 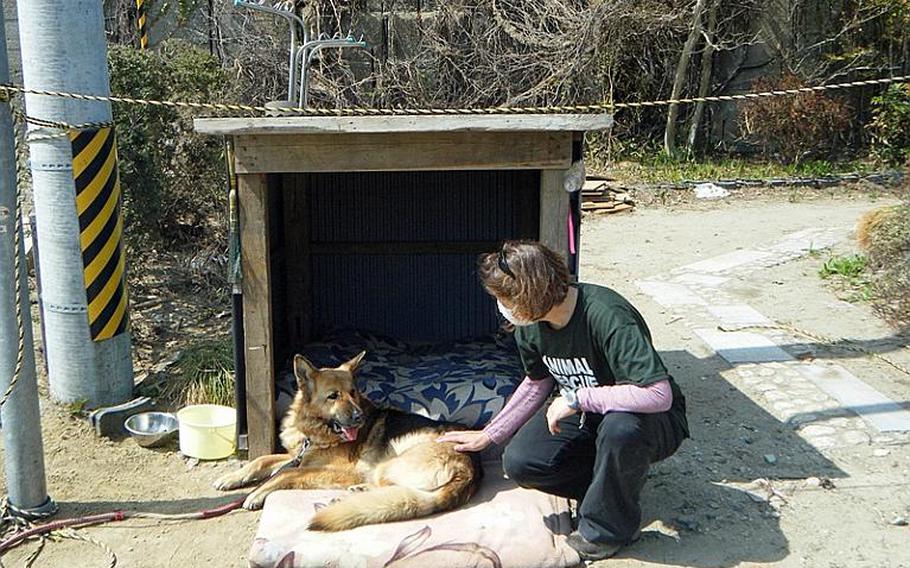 This 11-year-old German shepherd, who suffers from arthritis, survived the tsunami while tied to her kennel in Miyagi. Everything around her except the kennel, including her owner's home, was destroyed. (Courtesy of Kate O'Callaghan) 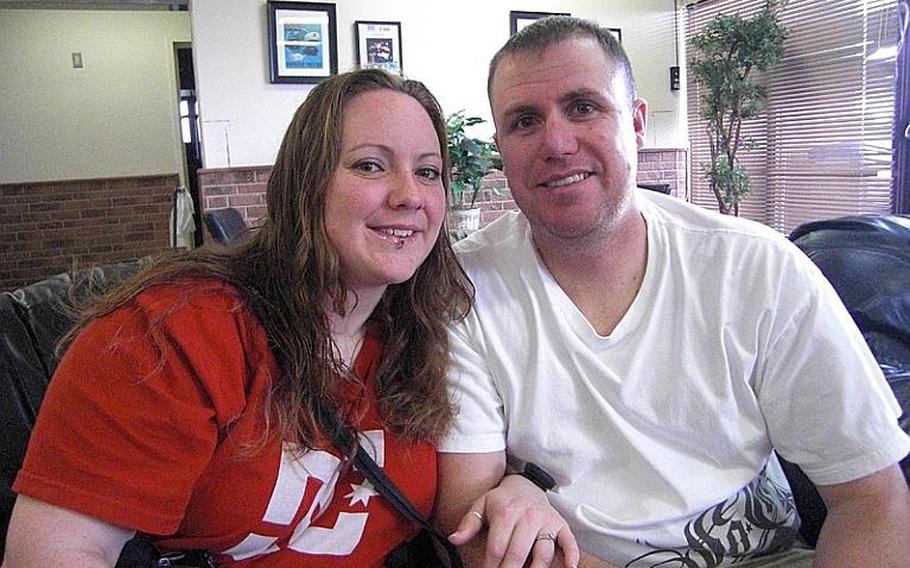 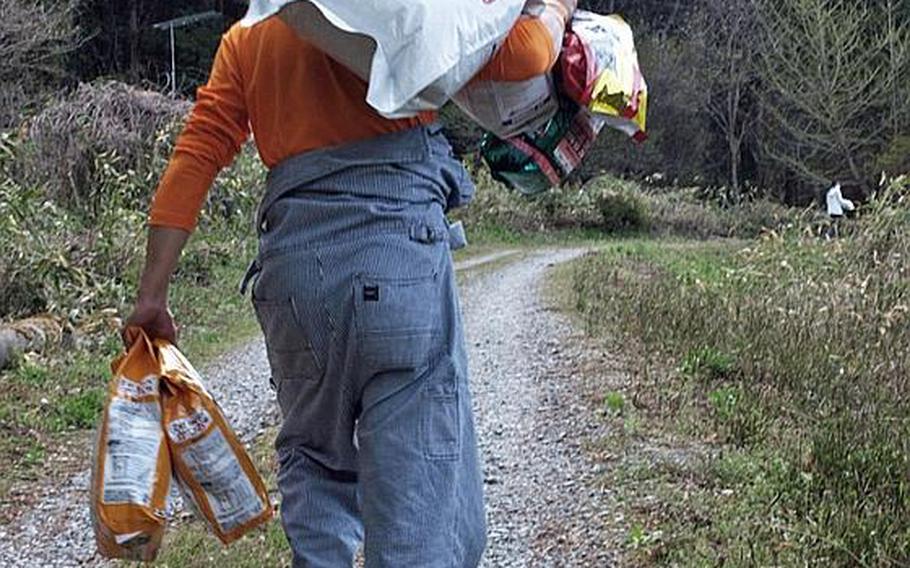 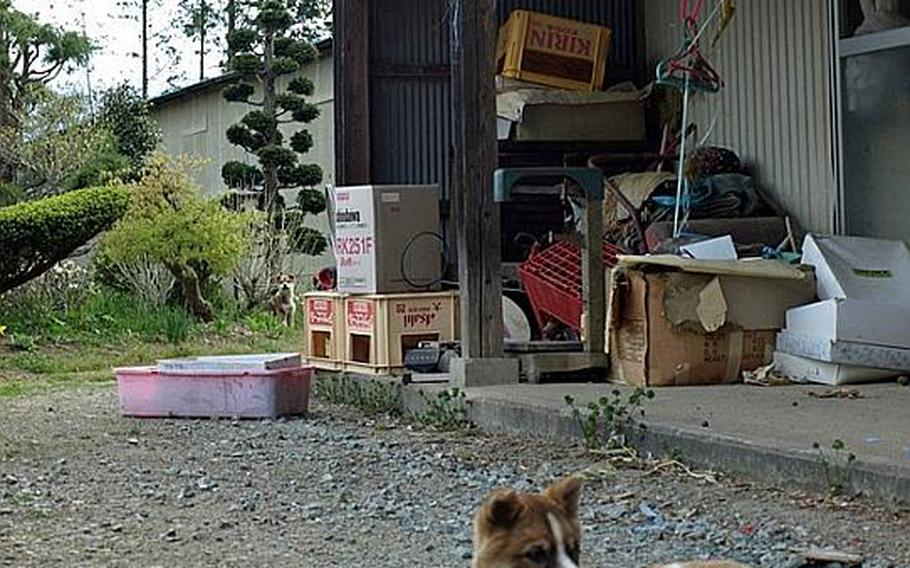 After their human families evacuated from homes in the no-go zone in Fukushima, countless pets, like this dog, were left behind. (Courtesy of Dogs and Cats Orphan Support)

CAMP FOSTER, Okinawa &mdash; It&rsquo;s a daily struggle for those left behind. Their yelps go unanswered as they roam aimlessly in search of scraps of food.

They fend for themselves in the restricted zone surrounding the crippled Fukushima Dai-ichi nuclear power plant, not knowing when &mdash; or even if &mdash; their human companions will return.

After the March 11 earthquake and tsunami struck, residents in the area were ordered to evacuate. Knowing that most shelters banned pets and believing the evacuation would be short-lived, many residents left their pets behind. In past weeks, numerous dogs have been found dead, chained to their doghouses.

Despite efforts from animal rescue volunteers and advocacy groups, thousands of pets remain in the 12-mile no-go zone, they say.

&ldquo;For dogs alone, there are at least 2,000 to 3,000 left behind in the restricted zone,&rdquo; said Yuri Nakatani, director of the Hiroshima-based animal rights advocate group Dogs and Cats Orphan Support.

Dogs and Cats Orphan Support has rescued about 400 dogs and cats so far from the area, said member Hirofumi Sasaki.

Animals rescued by the group are taken to a shelter in neighboring Tochigi prefecture, where they are paired with a temporary caregiver or adopted to a new home, Sasaki said.

&ldquo;Besides food, what the animals in the shelter crave for is love of human beings,&rdquo; he said.

The Japanese government began efforts this month to rescue animals from the restricted zone around Fukushima.

About 67 dogs and cats have been taken to safety so far, according to Ministry of the Environment officials, who said it is unclear how many pets remain in the area.

There are 5,800 dogs registered in the nine municipalities covered by the evacuation zone, said Koji Okura, deputy chief of the Ministry&rsquo;s Office of Welfare and Management of Animals. The number of displaced cats cannot be estimated because Japan does not require cats to be registered, he said.

&ldquo;It is not possible to figure out exactly how many dogs are still left within the zone,&rdquo; Okura said.

On May 10, the Japanese government allowed some Fukushima residents to return to their homes for two hours. Clad in protective radiation suits, the residents were allowed to fill to plastic bags with necessities and valuables. They were not allowed to take their pets with them.

&ldquo;Well, aren&rsquo;t pets valuable?&rdquo; said Nakatani, who questioned the government&rsquo;s policy on leaving the animals behind. She said the government must do more. Setting up pet-friendly evacuation shelters would be a start, she said.

The plight of the pets has drawn groups and volunteers from across Japan and abroad &mdash; including the U.S. military community &mdash; to take part in the rescue effort.

&ldquo;We must help the little innocent ones who don&rsquo;t know how to defend themselves,&rdquo; Amanda Nemeth, the wife of Air Force Staff Sgt. Andrew Nemeth at Kadena Air Base on Okinawa, told Stars and Stripes recently.

Nemeth said that she posted a donation request at Okinawa Yard Sales, an online classified site popular among Americans on the island.

As responses rolled in, Nemeth drove around the island military bases and filled her van with pet food, supplies and donations, which were eventually sent to pet shelters on the mainland.

&ldquo;We felt obliged to get as much stuff as possible,&rdquo; she said.

Kate O&rsquo;Callaghan, an English teacher at the University of the Ryukyus on Okinawa, has traveled on her own money twice to mainland Japan to help two animal rescue volunteer groups, the Japan Earthquake Animal Rescue and Support and the Kinship Circle.

&ldquo;There is still so much work to be done,&rdquo; said O&rsquo;Callaghan, who is planning another trip to the mainland next month. &ldquo;Just because it is out of the news does not mean that the need is not there.&rdquo;

To find out how you can help, contacts: