Suspect with suspicious package caught at Yokota after unauthorized entry 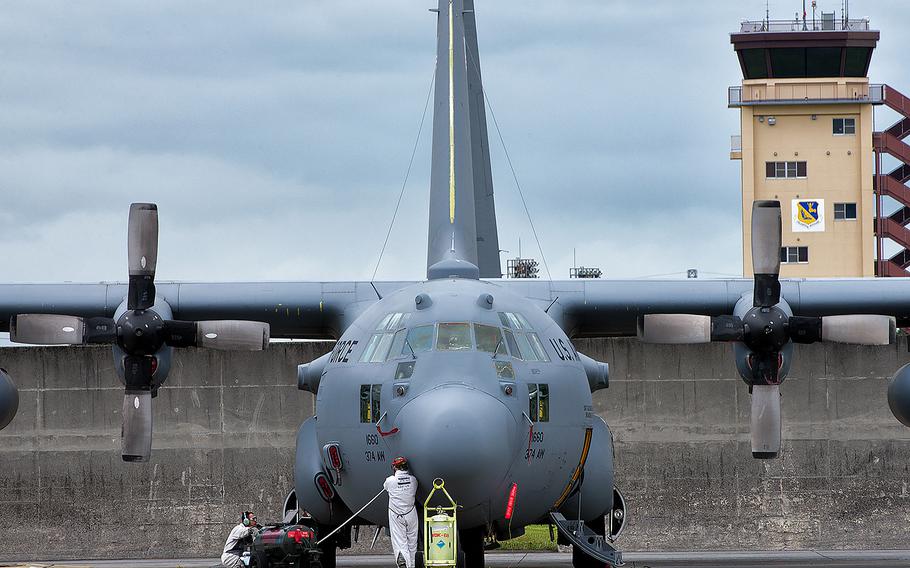 Supplies are transferred to a C-130 Hercules at Yokota Air Base, Japan, on Sept. 26, 2013. Security personnel at the base apprehended a suspect with a suspicious package who had gained unauthorized access to the base on Saturday, Dec. 23, 2015. (Osakabe Yasuo/U.S. Air Force)

YOKOTA AIR BASE, Japan — Yokota was locked down for nearly four hours Saturday after a man gained unauthorized access onto the base before he was arrested.

A shelter-in-place order that was issued around 5 p.m. for the installation 28 miles northwest of Tokyo was lifted at 8:50 p.m., according to Yokota’s 374th Airlift Wing Public Affairs office.

“Security Forces personnel apprehended a suspect who gained unauthorized entry into Yokota Air Base with a suspicious package,” the base said in a statement.

Yokota security forces handed over a backpack that the trespasser was carrying to Explosive Ordnance Disposal technicians from U.S. Fleet Activities Yokosuka.

The EOD personnel “searched and verified the backpack did not contain explosives and posed no threat to the installation,” Maj. Christina Hoggatt said in an email. The man was later turned over to Japanese National Police.

Yokota’s 374th Wing Commander Col. Douglas DeLaMater noted that the safety and security of the base was a “top priority” and called the security forces’ immediate response to the potential threat “outstanding.”

Having secured the scene of the incident, the base issued an all-clear notice and reopened all gates.

An investigation is ongoing, according to Hoggatt.

No other details were given, including how the man got into the base.

People who had been out late Saturday afternoon suddenly found themselves told to stay inside. Lines formed on both sides of the base’s gates when they were closed, and parking lots outside the installation were quickly packed as people waited for the all clear. Posts on the Yokotatalk Facebook page described commissary workers offering coffee and muffins to people waiting there.