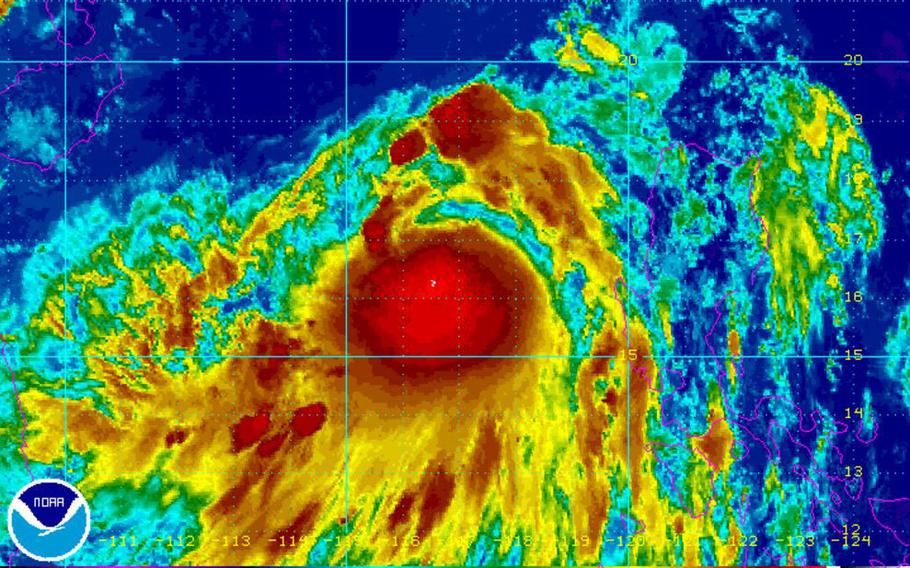 1 p.m. Tuesday, June 13, Japan time: All tropical cyclone warning signals for Hong Kong were canceled at 11 a.m. local time, following Tropical Storm Merbok's gusty visit to the city Monday evening. Hong Kong for a time was in southwestern gale Signal 8, when winds topping 45 mph and gusts up to 60 mph lashed the city. At least eight people sought medical treatment, more than 200 were sheltered in 21 localtions and the city government received at least 17 reports of downed trees. Merbok is diminshing into a low-pressure area as it makes its way through southeastern China. Joint Typhoon Warning Center issued its final warning on Merbok at midnight Monday, but remnants of Merbok are due to pass over or near Okinawa by midweek, according to forecast models. Okinawa currently is experiencing a sort of rainy-season renaissance, as heavy rain squalls and thunderstorms pelted the island overnight Monday into Tuesday. Locally heavy flooding was reported in some areas. U.S. and Japanese weather outlets forecast between 70- and 90-percent chance of rain and thundershowers all week. PST out.6 p.m. Monday, June 12, Japan time: Tropical Storm Merbok continues on a north-northwest course toward landfall Monday evening just east of Hong Kong, while its forecast track remains out of Okinawa's way, weather officials report. At 5 p.m. local time, Merbok was 56 miles south-southeast of Hong Kong, tracking north-northwest at 12 mph with 52-mph sustained winds and 63-mph gusts at center. Landfall is forecast for 9 p.m. 27 miles east of city's center. Strong Wind Signal 3 remains in effect for Hong Kong, which is expecting between 25- and 40-mph winds as Merbok passes.Joint Typhoon Warning Center's latest update projects Merbok to dissipate as it interacts with land over southeastern China, with its remnants forecast to move into the East China Sea and a limited window for regeneration, if at all. No closest point of approach is listed for Okinawa at this time. Rain remains in the forecast for Okinawa until later in the week, according to Kadena Air Base's official Shogunweather.com Web site. U.S. bases on Okinawa remain in seasonal Tropical Cyclone Condition of Readiness 4. We'll keep watch here. PST out.5:30 a.m. Monday, June 12, Japan time: Looks as if Merbok might not affect Okinawa after all, according to the latest from Joint Typhoon Warning Center.

Merbok has been upgraded to a tropical storm and is now forecast to peak at 46-mph sustained winds and 58-mph gusts as it roars toward landfall at around 8 p.m. Monday some 60 miles east of Hong Kong. Standby Signal 1 is in effect for Hong Kong.

But JTWC now projects Merbok to dissipate over southeastern China before it has a chance to get back out over open water.

That doesn’t mean Okinawa isn’t in for a pretty wet week. Kadena Air Base’s official Shogunweather.com Web site projects 70- to 80-percent chance of showers and thunderstorm starting Tuesday afternoon as the rainy season is forecast to return for the island.

6 p.m. Sunday, June 11, Japan time: Merbok has become the second named storm of the northwest Pacific tropical cyclone season. It was maintaining tropical-depression strength as it continues to develop northwest of the Philippines, on course to just miss Hong Kong to the east on Monday evening and Okinawa to the north on Thursday afternoon. At 6 p.m., Merbok was 290 miles northwest of Manila, headed northwest at 9 mph, packing sustained 35-mph winds and 46-mph gusts at center, according to the Joint Typhoon Warning Center. U.S. bases on Okinawa remain in seasonal Tropical Cyclone Condition of Readiness 4; no cyclone warning is currently in effect for Hong Kong. If Merbok remains on its current course, it’s due to pass 83 miles east of Hong Kong at 9 p.m. Monday as a weak tropical storm packing 46-mph sustained winds and 58 mph gusts. Merbok should pass 66 miles northwest of Kadena Air Base at about 9 p.m. Wednesday having diminished to 30 mph sustained winds and 40-mph gusts. Though it’s not forecast to be especially windy, expect quite a bit of rain associated with Merbok, Japanese and American weather services are reporting. Between 70 percent and 80 percent chance of showers and thunderstorms are forecast for Okinawa starting Monday afternoon, according to Kadena’s 18th Wing Weather Flight’s Shogunweather.com official website. More as Merbok develops. PST out.

Noon Sunday, June 11, Japan time: Tropical Depression 04W has formed west of the Philippines and is forecast to skim southeast China then curve toward Okinawa but as little more than a middling tropical depression, weather authorities report.