Tropical Depression 13W, #5, plus four others 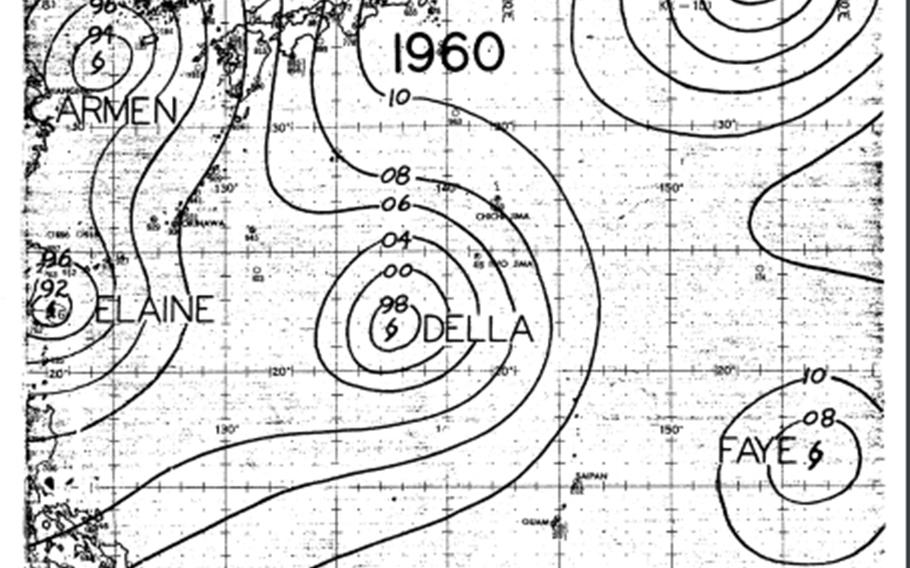 3:40 p.m. Monday, July 23, Hong Kong time: Standby Signal 1 has been raised for Hong Kong, which is expecting some effects from Tropical Depression Son-tinh, about 270 miles west. Hong Kong Observatory said Son-tinh will make its closest point of approach around midnight, and Strong Wind Signal 3 is not expected to be raised.9 p.m. Sunday, July 22, Japan time: It took digging through the Joint Typhoon Warning Center's annual tropical cyclone reports to find it, but a bit of history has been uncovered. For today, July 22, 2018, marked the first time since Aug. 22-24, 1960, that five tropical cyclones have been active at once in the northwest Pacific Ocean. And 1960 was only the second year that such records have been kept by JTWC. They were: -- Bess, Aug. 16-25. -- Carmen, Aug. 16-24. -- Della, Aug. 17-31. -- Elaine, Aug. 19-25. -- Faye, Aug. 22-Sept. 1. That was back in the day when all named tropical cyclones were given women's names. That changed in 1979, when they were given women's and men's names on an alternating basis. The first one named for a male was Typhoon Cecil, active April 11-20, 1979. It changed again in 2000, when Japan Meteorological Agency began keeping a list of names for tropical cyclones as contributed by countries around the region; typhoons have been so named from then on. The first one was Super Typhoon Damrey, May 5-12, 2000.12:30 p.m. Sunday, July 22, Japan time: Archivists and tropical cyclone enthusiasts of all walks are at the moment scrambling thorugh weather resources and history books to find a similar occurrance. No fewer than FIVE ... that's right, FIVE ... tropical cyclones active at one time in the northwest Pacific Ocean. The most that any can recall at this point is five in the Indian Ocean in the 1980s and four in the Pacific a couple of times, but never this many at once. And only one, 15W, appears to be a possible threat to any land masses with U.S. bases.Tropical Depression 13W is traversing the Bashi Channel north of Luzon at this time. It's not so much a wind event, 35-mph sustained winds and 46-mph gusts, as it is a rain event, dumping widespread monsoon rains as far south as Manila. Tropical Storm Warning Signal 1 remains raised for the Batanes and Babuyan islands, according to the Philippines' national weather authority PAGASA.Tropical Depression 14W remains well to the east and of no consequence to land. JTWC forecasts 14W to keep tracking north, converting to a sub-tropical low as it approaches the Kuril Islands northeast of Japan by later this week.Tropical Depression Son-tinh, which revived overnight Saturday, is forecast to remain a minor storm, circling over Hainan Island and then back over southeast China as the week unfolds. And of course, there's Tropical Storm Ampil, which remains on course to pass just north of Shanghai late Sunday afternoon.6 p.m. Saturday, July 21, Philippines time: Though Tropical Depression 13W's forecast track has edged slightly closer to Okinawa, its projected peak winds have been revised downward, according to the Joint Typhoon Warning Center. At 2 p.m., 13W was 275 miles north-northwest of Manila and was tracking east-northeast at 15 mph, slightly strengthened to 35-mph sustained winds and 46-mph gusts. 13W is forecast to peak at 46-mph sustained and 58-mph gusts at mid-afternoon Sunday. If it remains on its present course, 13W is forecast to pass 270 miles west of Kadena Air Base at noon Monday, about 40 miles closer than previously reported here. Ishigaki in southwestern Japan is in the crosshairs, but 13W should remain a middling tropical storm as it rolls by. It's forecast to pass 133 miles north-northeast of Taipei, Taiwan's capital, at 10 a.m. Monday, then make landfall at mid-morning Tuesday about 100 miles south of Shanghai. If it becomes a named storm, it would be called Wukong by the Japan Meterological Agency. That's Chinese for a famed hero in a Chinese story. 13W is already called Josie by the Philippines' national weather authority PAGASA. Tropical Storm Warning Signal 1 remains raised for the Batanes and Babuyan island groups, Ilocos Norte, Abra and the northern portions of Ilocos Sur and Apayao.3 p.m. Saturday, July 21, Philippines time: Tropical Depression 13W has been named Josie by the Philiippines' national weather authority PAGASA. It's due to rake northern Luzon and the northern island groups with wind gusts up to 40 mph. Tropical Storm Warning Signal 1 has been raised for the Batanes and Babuyan island groups, Ilocos Norte, Apayao and the northern portions of Abra and Ilocos Sur.11:30 a.m. Saturday, July 21, Philippines time: New Tropical Depression 13W appears as if it will peak only as a fairly strong tropical storm, rather than a Category 1-equivalent typhoon, as reported here earlier. Its forecast track remains the same, but top winds are projected to be 52-mph sustained and 63-mph gusts at around mid-evening Sunday as it rounds the east coast of Taiwan, then curves toward China. it doesn't appear to be a threat to any major population centers. 13W is forecast to pass 271 miles north of Metro Manila, 313 miles west of Kadena Air Base and, while we're talking 84 miles northeast of Taipei, it should be a middling tropical storm with its 34-knot windband placed north.5:30 a.m. Saturday, July 21, Philippines time: A new disturbance very quickly spawned into a tropical depression overnight Friday northwest of Manila. It’s forecast by the Joint Typhoon Warning Center to skirt Luzon, track around Taiwan and well west of Okinawa, then curve northwest into China early next week.

At 2 a.m., 13W was 335 miles northwest of Manila, headed east-southeast at 9 mph with 29-mph sustained winds and 40-mph gusts. If it remains on current course, 13W is forecast to edge just north of Luzon and through the Batanes and Babuyan island groups, skirt the east coast of Taiwan peaking as a Category 1-equivalent typhoon at mid-afternoon Sunday, then curve northwest into China early next week.

Okinawa might get the extreme outer bands of this system, but its central core is forecast to pass 274 miles west of Kadena Air Base early evening Monday.