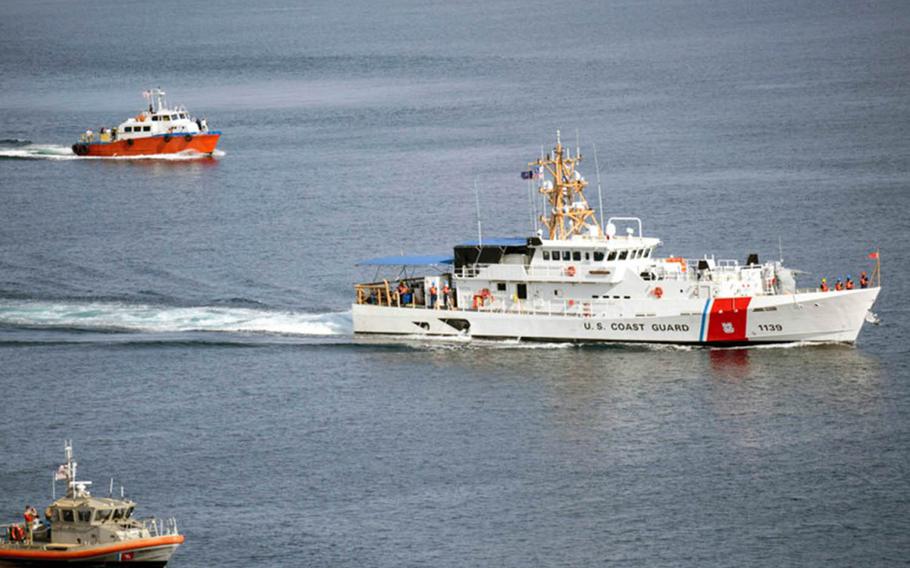 The Coast Guard has taken steps to increase its presence in the Indo-Pacific by placing its newest fast-response cutters in Guam to take part in patrols with U.S. partners in the region. (U.S. Navy)

The State Department is spending $200 million on programs for small island nations to counter “problematic behavior” by rival China in the Western Pacific, a department official said Tuesday.

The programs funnel money to nations such as Palau and Papua New Guinea to promote development and protect their fishing industries against unwarranted competition from China, said Sandra Oudkirk, deputy assistant secretary of state for East Asian and Pacific affairs during a teleconference with reporters Tuesday.

China’s “aggressive” behavior is threatening the region, she said.

Those actions have major economic effects for Pacific island nations, which rely on fishing to sustain their economies and feed their families, Oudkirk said.

“Fisheries have become – due to the crises in the tourism industry – an even more dominant part of these economies,” she said.

U.S. engagement with Pacific islands has grown along with China’s influence in the region. This year, the Defense Department has had talks with leaders of Palau and Papua New Guinea regarding possibilities of establishing U.S. military presences in their countries.

“China’s illegal, unreported and unregulated fishing and harassment of vessels operating in the exclusive economic zones of other countries in the Indo-Pacific threatens our sovereignty, as well as the sovereignty of our Pacific neighbors and endangers regional stability,” he said last month.

Oudkirk said Pacific island nations are “essential partners in fostering a free and open Indo-Pacific.” The State Department’s $200 million pledge aims to support these nations and help ensure the U.S. remains the preferred partner to work with in the region, she said.

Included in the funding are U.S. Agency for International Development programs to support development challenges and regional fishery activities and strengthen the “resilience of Pacific Island economies against volatility associated with natural disasters and economic shocks,” such as the coronavirus pandemic, according to a State Department factsheet.

Looking ahead, USAID next year will launch a $15 million, five-year sustainable coastal fisheries management program that will “address some of the drivers of IIU fishing that’s degrading coastal fisheries right now,” Craig Hart, USAID deputy assistant administrator for Asia, said on the call Tuesday with Oudkirk.

“We always talk about at USAID the journey to self-reliance, and that is exactly what we are striving toward,” Hart said.