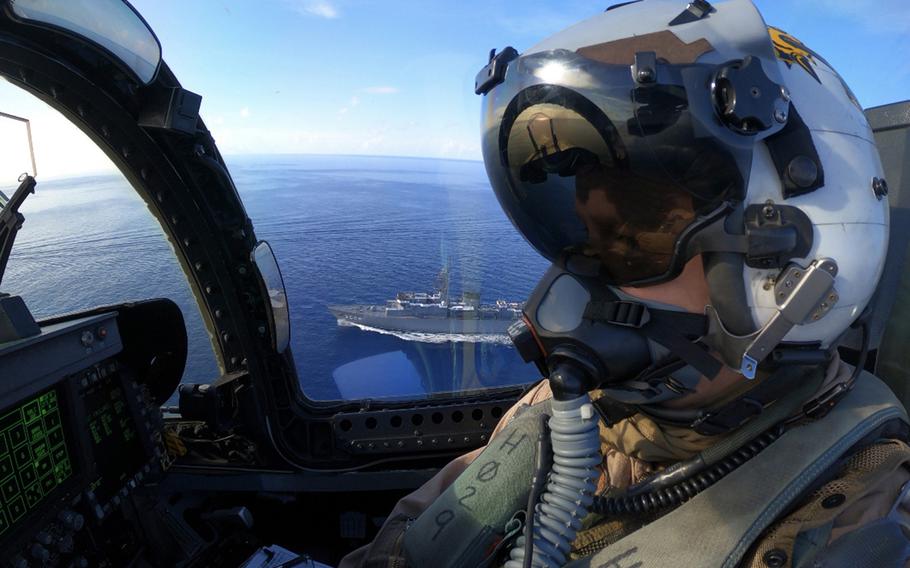 China’s claims to natural resources across most of the South China Sea “are completely unlawful, as is its campaign of bullying to control them,” Secretary of State Mike Pompeo said Monday in the State Department’s most vigorous pushback to date on the disputed sea.

“The United States champions a free and open Indo-Pacific,” Pompeo said in the policy statement, which aligns America’s position with a 2016 international court ruling. “[China] has no legal grounds to unilaterally impose its will on the region.

“Beijing uses intimidation to undermine the sovereign rights of Southeast Asian coastal states in the South China Sea, bully them out of offshore resources, assert unilateral dominion, and replace international law with ‘might makes right.’”

China asserts sovereignty over most of the South China Sea, claims disputed to various degrees by the neighboring nations of the Philippines, Vietnam, Malaysia, Indonesia and Brunei.

In 2016, the Hague’s Permanent Court of Arbitration determined that, under the 1982 Law of the Sea Convention, China’s claims over isles and reefs in the Spratly Islands near the Philippines were baseless.

China has ignored the ruling, and in recent years built and militarized artificial islands in the area.

“Today we are aligning the U.S. position on [China’s] maritime claims in the [South China Sea] with the Tribunal’s decision,” the statement said.

It specifically rejected China’s claims over Scarborough Shoal and the Spratly Islands near the Philippines; waters surrounding Vanguard Bank off Vietnam, Luconia Shoals off Malaysia, Natuna Besar off Indonesia; waters in Brunei’s exclusive economic zone; and James Shoal, an entirely submerged reef off the coast of Malaysia.

The policy made no change in the United States’ long-held position of taking no sides in the sovereignty disputes.

The change coincides with a far more robust presence by the U.S. military in the sea, where the U.S. Navy has stepped up the pace and visibility of operations in recent months.

Last week, the aircraft carriers USS Nimitz and USS Ronald Reagan conducted joint operations in the South China Sea and were joined by a B-52 bomber.

That show of force came as China was concluding its own maritime exercise near the Paracel Islands, an archipelago that Vietnam also claims as its own.

China’s embassy in Washington, D.C., issued a statement Monday saying the U.S. State Department “deliberately distorts the facts and international law” and attempts to “sow discord between China and other littoral countries.”

“Under the pretext of upholding freedom of navigation and overflight, it is recklessly infringing on other countries’ territorial sea and airspace and throwing its weight around in every sea of the world,” the statement said. “We advise the US side to earnestly honor its commitment of not taking sides on the issue of territorial sovereignty, respect regional countries’ efforts for a peaceful and stable South China Sea and stop its attempts to disrupt and sabotage regional peace and stability.”

“So in my view the statement primarily marks a political shift,” he said. “The Chinese will not be pleased that we have explicitly confronted their claims.

“And the Chinese will especially not be pleased that we sided explicitly with the Southeast Asians against them and did it with two aircraft carriers currently in the [South China Sea]. But this is the right policy, since it explicitly aligns U.S. policy with international law.”

Anthony Cordesman, a China expert at the Center for Strategic and International Studies, a Washington, D.C.-based think tank, said the policy statement coming at a time of “considerably more acute tension with China” was more a signal of U.S. resolve than an expectation China would drop its actions to dominate the South China Sea.

“So, what you’re really doing is reinforcing U.S. pressure and tension with China, not setting the preface for any kind of military action or legal action,” he said.

On a grander scale, the more explicit position “covers a great deal more than the South China Sea” because it is part of America’s steadily accelerating strategic global competition with China, Cordesman said.

Pompeo’s statement comes just two days after the New York Times reported that Iran and China are working on a potential military partnership that would give China foothold in the Middle East, a region where the U.S. has long held sway.